In a past life, events was that “other thing” I did. It was the wholly involved extracurricular that took up more time than my day job. So whenever there’s that special occasion coming up - such as a birthday - I always feel an innate pressure to make it what it is: An event. Or better than what it could be. The event. The event you wanna be at.

With this birthday being the 30th, I wanted to do it not only in a way hardly anyone else had, but I wanted to do it big. I don’t know how to apologize for that, so I won’t. I’ll just tell you that I did, and a little bit about how. My girlfriend’s name is Charlie and she lives at the top of Beachwood Canyon - her house was the setting. There was a full moon out on a beautiful, clear night and my celebration had one of the best views of it - straight from the Hollywood Hills. Little did I know that that night was and will be the biggest moon of 2009. Serendipitous. I love it. 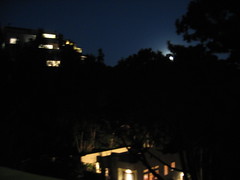 Because I like to think that everything about this was big. In the daytime, the road leading up to the house is littered with tourists parking their cars along the side before straddling the paint for a good, up-front shot of the Hollywood(land) sign.

While making daytime deliveries to the house, I often became stuck - frustratingly - behind “Star Buses” traveling extra slowly as the tour guide pointed out celebrities’ residences to tourists inside the roof-torn van. Even after you drive the curved, narrow roads in the areaÂ - the living space in the house is atop two flights of stairs. But from the balcony of the house is where it pays off:Â A clear view of Griffith Observatory - and on that balcony rested two hookahs for my guests’ enjoyment. 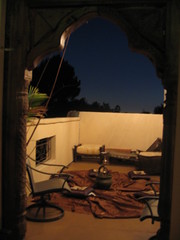 Never mind that one of Tom’s hookahs was broken before the night was well underway - I was just in cahoots that my many different worlds were colliding in one very special place. School friends came, blogger friends came, coworkers as did my peeps from Mosaic and my old Volkswagen car club. Libations were poured by a very special bartender and furnishings were in no small part thanks to Corrie. The sound system was set up by Tim. Hookah supplies by Giancarlo and Melissa. Errands, cooking and clean-up were entirely Chris, Bridgette and Tim. 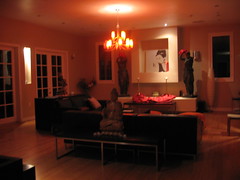 I have to admit that I was stressed out about the night’s playlist beforehand. I had decided to not do a DJ and to outfit the audio ambiance myself. I was aiming for lounge over dance party. Conversations over gyrations. I was pleased - if even relieved - to receive compliments on the playlist the entire night. :) I’ve always believed a playlist (see my last.fm) is so personal it’s almost like being an artist. A bastardized DJ at most. In the most extreme scenario, my existence would be judged by those closest to me according to which tracks I picked - and in what order. It worked out. The hookahs were great conversation pieces. Cherry, strawberry and blueberry flavors were shared by friends of all walks of life - my favorite part of Los Angeles. My native Angeleno (Silver Lake, to be exact) coworker came up to me at one point in the night and mentioned that everyone he sat with during his hookah session were “all from somewhere else” and that he felt rather plain. In fact, I thought him special because he, as a native, was actually the minority in my circle. Even the bartender was from Oklahoma - that is, from somewhere else. It’s par for this course. While there were 77 confirmed guests on the Pingg invite (good-bye, Evite!) and 20-something maybes, I got a few sick calls. After all, it’s January and multiple bugs are being passed around. No matter - about that many showed up and I was ecstatic to be surrounded with great friends, great camaraderie. 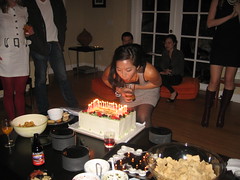 And great cake! My girlfriends managed a HUGE triple-berry shortbread cake from Sweet Lady Jane’s - my absolute favorite!! Anyway, I wanted to thank everyone who came and helped make my 30th so special. I feel so blessed to have the quality people in my life that I do. It’s nothing I will ever take for granted. After all, a girl is only as good as the people who surround and support her - and I couldn’t have made it this far without you. To a new decade, a new era, and continually - new beginnings… <3 Happy Birthday to me - today! <3

(I will update these sets as you make them available to me.)