Do This: Alcove Brunch at the Bar in Big Bar 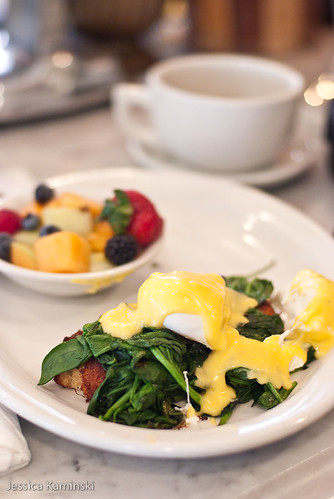 [/caption] We all have done it. We all have stood in lines. We may have even stood in lines for brunch, even though it’s our first kick-start of the day and can’t even function standing up in said line without that first cup of coffee. [caption id=“” align=“alignright” width=“180” caption=“Lifeboat Cocktail”] 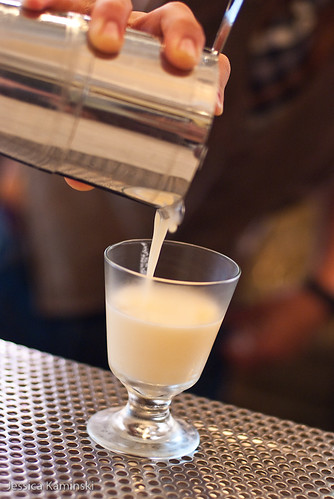 [/caption] So when I took my friends visiting from Milwaukee to The Alcove for the ultimate L.A. brunch, I was feeling pretty much like a sucker when I saw the line trail out their cute, tiny cottage door and onto the brick walkway. It was a Saturday morning - brunch time at one of the most popular brunch spots - and I dared think, “I don’t stand in lines.” Luckily, one of the staff caught my “explore other options” vibe and said, “There are seats at the bar in Big Bar, if you want to sit down.“Â I was fast as a rocket: “Is it full menu?” “Yes.” So I sprinted into Big Bar to claim our four spots in a flash. Bar seating is underrated. I enjoy being a part of the action (the bar at Lazy Ox Canteen is one of my favorite places to eat solo) and witness to what goes into making the food and cocktails I’m about to consume. The best seats in the house were essentially unclaimed before we had arrived. And with Rosie Ruiz and Eugene Lee behind the bar, my friends and I were about to experience a cornucopia of delectable cocktails beyond our already-excellent Bloody Marys made with pureed in-house tomato juice and sinus-clearing horseradish. I loved my crab cake benedict and my friends (two Jessicas and an Eric) blissfully enjoyed their scrambles and crab cake sandwich. It’s no secret that food is consistently solid at The Alcove, and I was relieved that that was still true even though it’d been awhile since I had returned. Truth be told, we stayed at The Alcove for over 3 hours, thanks to our willingness to be liquid guinea pigs and Rosie and Eugene’s gregariousness and hospitality at Big Bar’s…bar. [caption id=“” align=“alignleft” width=“180” caption=“Plymouth Gin, vermouth, jalapeno”] 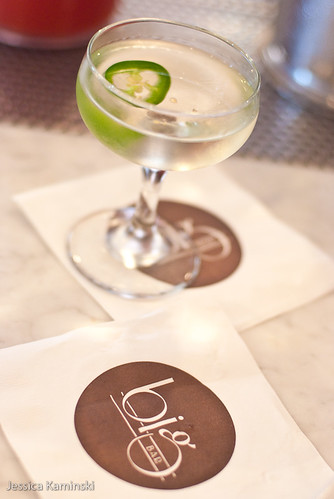 [/caption] I never did sit in front of such a lively pair of bartenders in the morning with zero guilt. Usually, I’d validate morning drinking with a bloody mary - but why restrict it to just one cocktail? Eugene asked me what I wanted to drink next, and I picked gin. And so he put together a beautifully simple cocktail that had just the right amount of kick in it thanks to the jalapeno. Hand-crafted, tailored cocktails in the morning … I can handle that. But I apparently can’t handle notes during brunch in the morning, since the coveted recipes are nowhere to be found in my phone. (Don’t worry, I can type without looking at my phone, under the bar. Look ma, no touch screen!) One of the lost notes includes the Lifeboat cocktail, which Eugene shared is a Kirsten Dunst favorite - to the point of returning a handful of times and bothering him during his meal to make the cocktail, just to skip out on the check. Gah. Celebrities. It may not be Hollywood, but there’s no escaping that The Alcove is a scene, a place to be. Deservedly so. Just don’t take my seat at the bar. P.S. - Eugene’s got tunes on the patio and at Big Bar on Wednesdays, the themes of which change every week. So, be sure to pop in for food and/or cocktails for what promises to be crazy, mid-week funtime. Big Bar itself also has some of the best bar bites I’ve had in town. All photography by Jessica Kaminski…which is why it looks professional and stuff.