Dining at the New Wine Bar at The Hollywood Bowl 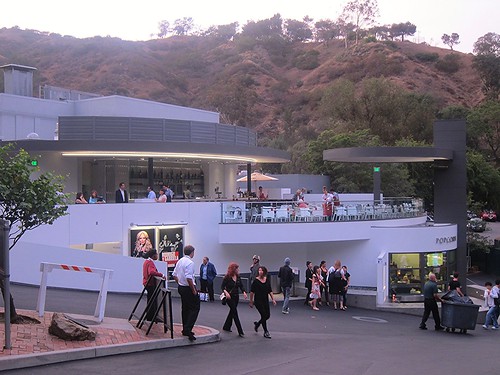 The Wine Bar[/caption] Anybody who enjoys live music in Los Angeles knows and appreciates that the outside food and drink policy at The Hollywood Bowl is the most liberal - and accessible - in the entire city. Basically, as long as you’re not making a ruckus, it is all allowed to be brought in and enjoyed at your seat. Thus, tons of restaurants offer take-away picnic options specifically designed for Bowl concerts, summer after summer. Concertgoers take advantage by bringing in bottles of booze in coolers and picnic baskets to be enjoyed and discarded on the sacred Hollywood Bowl grounds. But if you go to The Bowl a lot - and I do, as a proud Hollywood resident - let’s just admit that sometimes we all get a bit lazy. The refusal to pay for $17 stacked parking leads to a small trek to this famous venue set against the Hollywood Hills - and sometimes I just get a little tired of all the lugging. [caption id=“” align=“aligncenter” width=“500”] 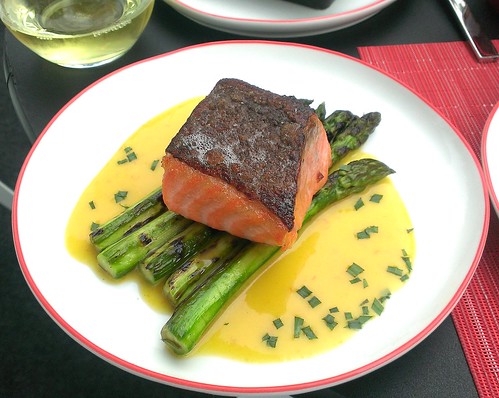 Ocean Trout with crispy skin, grilled asparagus, aji amarillo butter[/caption] Enter The Patina Group, already a longtime catering and concessions presence at the bowl, which fleshed out a brand new, al fresco wine bar that debuted this year thanks to a green light from the L.A. Philharmonic Association. While small plates have already hit its peak in L.A., it’s a welcome format tailored to The Bowl. Diners can order as little or as much as they like, whether they stop in for a bite and a glass or a full meal complemented by wine pairings by Bar Manager and Executive Sommelier Stefan Jüling. [caption id=“” align=“alignright” width=“240”] 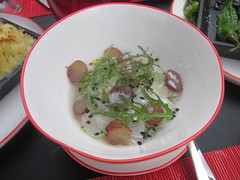 Summer Flounder[/caption] I found that the selections, from start to finish, were excellently curated as well as executed, thanks to Chef Joe Vasiloff. We started out with a really impressive cheese selection - with a variety of styles across many origins (Spain, Oregon, Hudson Valley and Vermont on one cheese plate?) - complete with accoutrements like honey, almonds and quince. The ever-favorite Shishito Peppers were simply prepared, but the cold Summer Flounder, prepared with Meyer lemon granite, chilled grapes, black sesame seeds and purple mustard greens made for a wonderful kind of ceviche. Many will love their classic Macaroni and Cheese for Two, made with white cheddar and topped with crispy breadkcrumbs. However, if you’re a fan of blue cheese, you’ll certainly want to order the decadent Spanish Chili-Cheese Fries, covered in Cabrales blue cheese gravy, Sobrassada sausage and pico de gallo. It’s pretty much out of control. [caption id=“” align=“alignleft” width=“240”] 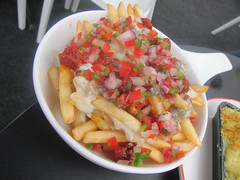 Spanish Chili-Cheese Fries[/caption] The Ocean Trout, which sits upon four spears of grilled asparagus, was perfectly crispy, flaky and ultimately delicious. A neighboring table went so far as to order two, making the dish a dual entree. But if you’re feeling beef, you’ll be happy to find that they offer Flat-Iron Steak, complete with marble potatoes, carmelized onions, chimichurri sauce and bone marrow (love that marrow)! Luckily, the beverage selection at The Wine Bar also sings, thanks to Stefan Jüling and Paul Sanguinetti. All beers, with the exception of Heineken, hail from California and lean towards summer with a sprinkling of ales, including the couple of notoriously hoppy Stone ones. A dozen white wines and a handful of reds are available by the glass, but the whole bottle list is a wonderful selection of mostly California wines, with Chardonnays and Pinot Noirs making up the largest categories. We went with a delicious bottle of 2010 Walter Hansel oaked Chardonnay from Russian River Valley. [caption id=“” align=“alignright” width=“180”] 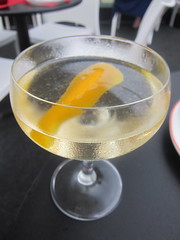 Bamboo Cocktail[/caption] Paul Sanguinetti, who is by now Patina’s go-to man when it comes to cocktails, did a stellar job making the most of The Wine Bar’s beer and wine liquor license, basically pushing the limits of that category. A prime example would be the classic Bamboo Cocktail (circa 1890, Yokohama), made here with Dolin Dry, Alvear Fino Sherry and orange bitters. This is the classic, boozy cocktail you can enjoy if you have a bitter palate like mine - and you won’t even miss the full bar. That’s not to say that Paul’s soju cocktails are shabby, either. I was surprised to find myself really enjoying them, causing me to really reconsider the previously dismissed distillate, forever tied to long-buried, traumatic memories of collegiate K-clubbing. (…And then I figured out that I need an expert barman behind the mixed drink for soju to have any hope. Continue.) For the stirred Koreatown cocktail, Paul mixes Yokaichi Mugi Soju, Dolin Rouge, Byrrh Quinquina, Angostura and Amarena cherry for a surprisingly boozy-tasting drink (thank you, vermouth and Byrrh Quinquina!). [caption width=“240” align=“alignleft”] 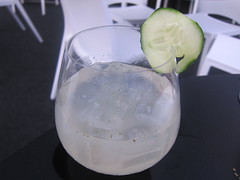 Peppertree Lane[/caption] If you’re looking for a more refreshing take on wine cocktails, I’d go with the Sparkling Spectacular, made with strawberries, housemade elderflower cordial (what Paul calls “bootleg St. Germain”), fresh lemon juice, soju and sparkling wine. I loved that this fireworks-inspired drink wasn’t too sweet. For the cucumber-minded, you’ll want to order the Peppertree Lane, made with soju, cucumber, mint, lime juice and garnished with specks of black pepper. Also, the aperitifs utilized in these cocktails are available straight up or on the rocks. If you’re on a budget, bringing your own picnic is still the way to Bowl, but it’s also encouraging that to dine at the new Wine Bar, you don’t have to sacrifice any quality for the convenience. You’ll love being ensconced in the Hollywood Bowl’s trademark ambiance in the hills while enjoying a delightful view with which to enjoy quality, delicious small plates and a variety of libations across all price ranges. Whether you want snacks or full-on meal, a glass of wine or many, The Wine Bar is a perfect addition to The Hollywood Bowl. And if you’re not finished by the time the concert is about to start, no worries - just ask for that magic paper to-go cup to continue enjoying your beverage (or even your food) at your seat. Perfect. All food and wine were hosted.

Closes one hour before end of performance.