DieN'Isis XI: The Zombie Apocalpyse Beer Dinner is at Dusk on Sunday 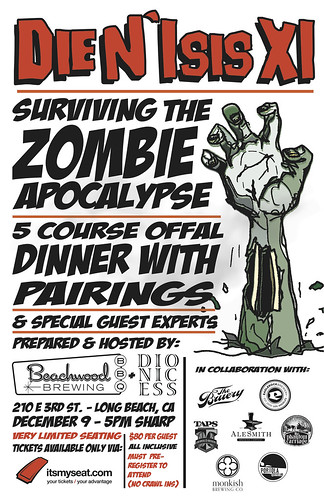 Dio(e)nicess Poster[/caption] Something special is coming up on Sunday - it’s so special it’s “to die for,” and luckily there are a few tickets left, so grab them quick. Yet again, there’s something brewing down in Long Beach - but for this 11th installment of Dionicess, you can forget it being holiday themed, and instead Walking Dead themed. Zombie themed. What-have-you. To match, the series has been temporarily renamed as “Die”-nisis and will be serving food to accommodate their vision, including food and beer inspired by corpses, skeletons, brains and all of the above. Though they say it’s a 5-course dinner, if you’re familiar at all with their events, you know there will be some extras. [caption id=“” align=“alignright” width=“240”] 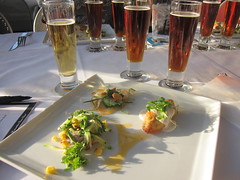 Dionicess X at Beachwood BBQ[/caption] The menu, prepared by Gabe Gordon in collaboration with the other Die-Nisis heads, reads something like the chapters of a zombie book:

And of course, the beer. Beer that will be brewed especially for this event includes participants like none other than Beachwood BBQ & Brewing, Eagle Rock Brewery, Monkish Brewing Co., Phantom Carriage Brewery, TAPS Fish House & Brewery, and The Bruery. Everything you could possibly want in Southern California beer. And Portola Coffee Lab is involved with the final dish, described as “The Cure.” Bonus: You’ll get to hear intriguing speakers (a pharmacologist, an expert in forensics and a neuroscientist amongst others). They will guide guests through what they might expect in a zombie apocalypse, and how best to prepare themselves when one occurs. I mean, if it occurs - in which case you will certainly survive much longer than others who will not have heard their tips. So get your tickets before they’re gone. Your survival could depend on it…