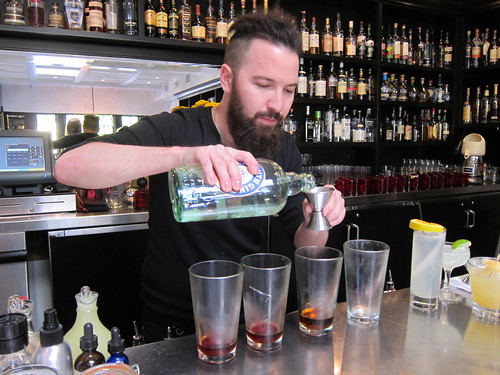 At Comme Ca[/caption] I had a chance to attend a shortened version of basic cocktail training Sam Ross might employ to new bartenders. It was an awesome chance to learn from and get back to the basics of great cocktails with the guy who, through Comme Ca, pretty much helped to revolutionize the cocktail landscape of Los Angeles. Next time you’re in New York, you can visit his and Michael McIlroy’s latest project, Attaboy, in the intimate, former Milk & Honey space in Chinatown. It’s for old world drinking aficionados. As you’re on the other side of any bar figuring out what to order, you might not need to know that 3⁄4 oz lemon (or 1 oz lime) balances out 3⁄4 oz simple syrup in most citrus drinks on the menu. Or that the Old Fashioned on the rock just served to you was actually served “hot,” or short of optimum dilution, so that you’d enjoy it as it mellowed out as the ice melts. It would, however, add to your appreciation of the techniques that go on behind the bar. Every single cocktail can be broken down into 5 or 6 cocktail families, just as there are 5 French mother sauces.” While every sauce can be traced back to one of these families, our goal is to tell which family each cocktail is from. We covered Sours, which are easier to conceptualize once you know how closely each drink is related to one another. [caption id=“” align=“alignright” width=“180”] 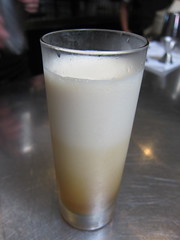 Rum Fizz[/caption] The Sour Cocktails Sam spent a lot of time on Sours, which was a great way to learn how it’s broken down. If you know that a Sour is citrus, sugar and spirit, then that in itself is the base. Again, your base recipe will be: 3⁄4 oz lemon 3⁄4 oz simple syrup 2 oz spirit Tom Collins is a Sour served long, on ice and finished with club soda on top. A traditional Sour is made with egg white. A Fizz is a traditional Sour with club soda on top. Sidenote on eggs: While some are squeamish about eggs in cocktails, it’s a very traditional ingredient that gives the drink a silky smooth consistency. It’s also a binding agent and takes the edge off the acid. So once you’re finally over getting squeamish over egg, you can really see how they read in a cocktail menu: If it’s silver, it has egg white. If it’s golden, it has egg yolk. If it’s royal, it has the whole egg. [caption id=“” align=“alignleft” width=“240”] 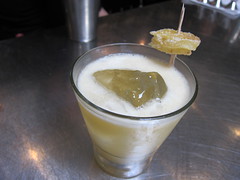 Penicillin[/caption] And if you’re ready to move on, a Fix is a Sour on crushed ice. A Bramble is a Gin Fix on crushed ice with a layer of muddled raspberries. Easy? (If we start going backwards, a Fizz is a Tom Collins with no ice and egg white. And it’s a Sour without club soda, and is a Fix without egg white and crushed ice.) If, in lieu of lemon, we use lime juice (which is less acidic, so the quantity here is 1 oz): A Gimlet is a nontraditional sour (no egg) with 1 oz lime, 3⁄4 simple & 2 oz gin. A Daquiri is a Gimlet with lime and white rum. Daquiris should not be a blended things with whipped cream, etc. A South Side is a Gimlet with mint while an East Side is a Gimlet with mint and cucumber. Rickeys are Gimlets served long with club soda. That makes a Gin Rickey a Tom Collins with lime instead of lemon. And these are all shaken, as you do when dealing with citrus (eggs, liqueurs). Sour problem in 20 sentences or less: Solved. [caption id=“” align=“alignright” width=“240”] 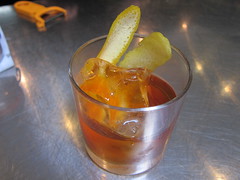 Manhattan[/caption] On Dilution: Shaken vs Stirred “You can always add water to the drink but you can never take it out.” – Sam Ross Just as drinks with citrus, egg or egg whites are shaken, drinks that are more spirits-forward and clear (Manhattans, Negronis and Martinis) are ones you want to stir. Some drinks are shaken longer than others, depending on presentation. If more dilution is meant to occur after it’s served, either with ice or club soda, then shake it for a shorter amount of time. If it’s served up, then all the dilution is given to it through the shake and this drink is only going to get warmer. If crushed ice is used, then add it at the end; don’t build the drinks on ice. The moment ice hits the mixture, dilution starts. Sam’s biggest complaint with stirred drinks (of which Negroni on the rocks is Sam’s favorite) is getting a drink that is served exactly the same up as on the rocks. A Tom Collins is going to be a hard, but short, shake because it’s over ice and with club soda. Drinks on the rocks should be stirred a shorter amount of time, “hot,” so that it’s prime as it mellows out in the glass. [caption id=“” align=“alignleft” width=“180”] 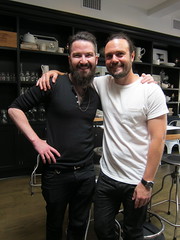 Sam Ross & David Myers[/caption] How long should it take you to drink a cocktail? “The way to drink a cocktail is quickly, while it’s still laughing at you. (Wines, of course, merely smile.)” - Harry Craddock The tiny ice crystals and air bubbles at the top of the drink are the head of the drink, known as the “life of the cocktail.” Sam referenced Harry Craddock’s quote in that you want to drink the cocktail while the head is still there, or still “laughing.” On average, this will be about 20 minutes. Want more Sam Ross? Check out his Bartender’s Choice app, which will enable you to recreate the classics and more by searching through recipes based on spirit, style of drink or sensation. Right now, it’s available only for iPhone (boo) but the Android version is coming “soon.”