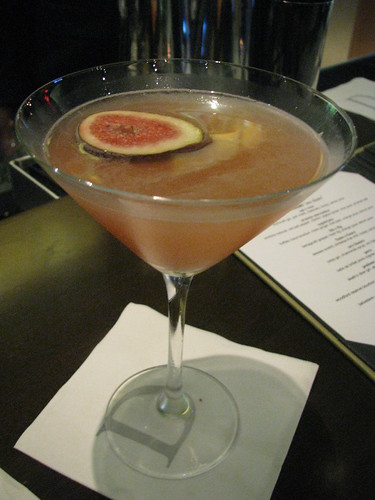 [/caption] Caroline on Crack and Twitterland have been a-buzz with Drago’s special Thursday. So if you don’t already know, tomorrow their entire Nuovi Classico (new classics) cocktail menu - normally $12 - will be available for $8 per drink. Yesterday (Tuesday), was when the menu debuted. On H.C. of LA-OC-Foodie’s and my way to a Whiskey Society meeting over at Seven Grand, we decided to stop by Drago for some tastes. [caption id=“” align=“alignright” width=“240” caption=“Pera”] 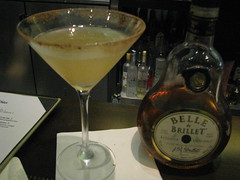 [/caption] We met Michael Shearin, who was very gracious, knowledgable and will be sure to take care of you when you stop in tomorrow. Despite this being the day the brand new cocktail menu debuted, I was surprised - with the exception of the Fumo e Fuoco, which Michael promises will have more kick to it when he’s done - at how refined the cocktails were. Favorites were definitely the 5th e Fig (above), Pera (right) and the Poizone Magica No. 2 (below). If I tried the cocktail, notes are includedÂ under its listing:

Very good, if what H.C. described as a “girly drink.” It’s girly in every good way, though I do admit being partial to basil.Â It’s refreshing and reminiscent of the ginger spritzers the bars are making nowadays.

Loved the grappa - an often passed-over liqueur but gets major nods in this cocktail. It’s not too sweet,Â very full yet light and the garnish itself (a fig slice) is pleasing to your eye as you sip. 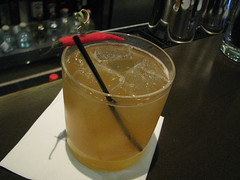 If you dare, you may want to gently affirm to your server you’re no weakling when it comes to spice. This is a good introduction to and twist on scotch with the addition of honey and lemon which cuts its usual brawn and keeps it light…and hopefully spicy.

Love the pear cognac - a unique main ingredient, and subtly sweetened with Cointreau and made light with lemon juice. Delicious! The cinnamon powdered rim in this drink isn’t mentioned on the menu but in my opinion it’s really the finishing touch.

A close favorite! Love the white gin, which happens to hail fromÂ a remote part ofÂ Wisconsin. Stubborn vodka drinkers would enjoy this. Poison? Perhaps. Deathly? Definitely! You won’t know just how intoxicated you’re becoming by drinking this potion. Don’t forget the brandied cherry on the bottom - if I catch you, you’ll have ‘splainin to do.

Lives up to its name - in color, aroma and taste. The shiso cuts the sweetness of it and keeps it interesting, though the cocktail isÂ a bit sweet.

Overall, I was impressed with a select few cocktails - while knowing that a menu will come into its own with more wear. But preparations are definitely being made for their big day tomorrow - so I suggest taking full advantage. We’ve yet to see if this will be a cocktail destination - but it looks like Drago will be coming into its own very soon. Also, while you’re there, you might as well increase your cocktail intakeÂ by nibbling on some very respectable bar bites with which to absorb your libations (available all day, every day):

I can vouch for their pizza crust. There might be a little too much cheese but you know - I don’t mind cheese.Â  I really loved the Il tagliere di affettati con gnocco fritto, which were little, delicate charcuterie burgers in little pastry buns with arugula. Delicious! It might be a good idea to make the trek to downtown if you don’t already work there. It’s something I could look forward to all day - especially since it’s spent behind a desk. And if you do work downtown, what are you waiting for? Plan to meet your camarades for lunch!

Bar bites available at stated priceÂ all day, every day