The issue with working amongst a 90% male work force (and one of your women representativesÂ is not necessarily at the top of the totem pole)Â is that you essentially cultivate your career inside a bathhouseÂ of testosterone. The guys are in their ties and slacks, sure, but you’d thinkÂ with the talk that goes on inside here you were actually overhearing men’sÂ locker room conversation. It’s gross. 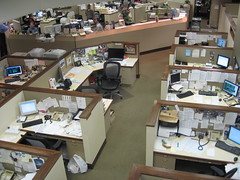 I also enjoy a view that is of the Presidential Box variety, asÂ my cubicle is in an open-airÂ mezzanine area sharedÂ with only a couple other coworkers. My coworker, Chris, and I have turned it into a sort of peanut gallery. We’re removed from the actual boiler room (read: we have ourÂ privacy) but are free to spectate and heckle to our heart’s desire. And no one below knows what’s coming.Â  To complete the picture of my workday,Â I haveÂ a sales job.Â Actually, I think almost every single career - including in academia - is a sales job at the core. YouÂ have a product, which you have toÂ convince a buyer or otherwise consumer of that product that it’s your product that they want, in exchange for compensation. But this career isÂ a sales job at the core and on every appendage shooting out from it. It raises the temperature past those of other careers - especially in this market - but I have reason to feel extremely blessed. With all the market drama that’s been going on - I can honestly tell you that with our niche, there is NO otherÂ place on Wall StreetÂ I would rather be standing. (No “Main Street” mention here - thanksforlooking.) It would be modest to say thatÂ the company isÂ having a pretty awesome year. But back to the boilerÂ lockerÂ room dynamics. “Dude, so I was on this date with this Asian girl last night…” He stopped, because he saw that I was making my way down the aisle. And then he greeted me, “Oh, hi Esther.” I had to ask. “Yeah, man - was she hot? Or was she just Asian and that was enough?” I actually wanted to know - as a point of inquiry and curiosity, not an accusation. Necessarily. I like to ball-bust nip things in the bud, and it’s probably the most valuable thing I’ve learned here. Part of it definitely stems fromÂ the need to activelyÂ push back because otherwise,Â that testosterone, that “other force”Â isÂ overbearing. And the guys, likewise,Â know what they get from me. If you tellÂ a Bro Story within my earshot with the intention of gettingÂ the guys to think more highly of you as a result of your latest conquest, you better know it’s fair game for me. I’m also the most avid belcher in the office. Make of that what you will. One time after one of my impromptu performances, a rookie seeking solidarity with his newfound coworkers said within earshot of everyone, “Well, that’s ladylike”Â as if it were the aim of every female to be viewed as “ladylike” in the minds of all her coworkers. That the highest she could aim would be to fit her lifestyle and mannierismsÂ to all theÂ accepted mores, norms and indications of “Ladylikehood” to the acceptance of all men worldwide officewide. To their credit, my longtime coworkers said, “Just wait; you’ll see, man.” I told him, “Oh honey - you don’t even know. Are you the PC or employee conductÂ police around here now? YouÂ can bring up ladylikeness when you can get rid of the sexist locker room talk that goes on around here.” Yes, it is too much to expect some sort ofÂ friendly coworker camaraderie from me or even divested attention toÂ your self-indulgent small talk after I hear you make misogynist comments and gestures every single day. Salesmen. Adaptation is a skill, but if you betray one face for another then the ante on your credibility is on the line. The creep factor amongst salesmen, period, is seemingly more obvious. Jimmiwin said it best: “Guys are creepy only if the attraction isn’t reciprocated.” Good point. Because then it would just be flirtation, now wouldn’t it? But seriously? What if you just exude creepiness overall? While I think Jimmiwin is mostly right, I think it may just be an excuse thatÂ takes the responsibility off the guy. There are undoubtedly guys whom many women think are creepy. What is creepy, then? Lack of selectivity? The sometimes-perpetual feeling you get that theyÂ want something from you that you’re never going to give to them?Â The type of guy who playsÂ theÂ numbers game - and in that respect, should we not hate the player but hate the game? I know a large part of my overall jadedness with my coworkers (not to be confused with my career) is the fact that I’ve worked here for 5 years. While the work may be an inspiration to my daily routine, more coworkers simply aren’t than are. Anyway, this is fine because hey - don’t poop where you eat. Just get in there and get out!