I hate that at The Highlands night club (at …Â guess what?Â  Hollywood and Highland in Hollywood),Â inside one of the dance rooms, there isÂ an illuminated picture of the Manhattan Skyline coveringÂ the entire back wall.Â  What is that atrocity? Here you are, and you’re in Hollywood.Â  You’re in Los Angeles and you wanna go out.Â  You wanna go to the hottest spot in town–so naturallyÂ you go to _the nearest shopping mall in a tourist area._Â  And you’re getting your groove on in the club, right?Â  You find outÂ that the club owner wants you to …Â imagine as if you were in New York.Â  Because New York is the place to be, and you justÂ wasted your plane ticket.Â  Call it a hunch, okay?Â  How about some city pride, already?Â  Actually, thanks for the city knowledge–and the reminder that the HH Center’s purpose is a cheap, back-up parking spotÂ at the bottom ofÂ The Bowl.Â  Oh, and for housing The Janice Dickinson Modeling Agency. 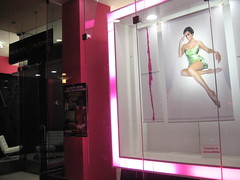 (Yeah, guilty as charged.Â  How else was I supposed to gather good reasons to hate the placeÂ if not to visit the club in person?)

But you can’t really dispute that it’s a trendy thing, sometimes, to hate L.A.Â  If you don’t live in L.A., we already know for a fact that you hate us.Â Â (Hell, I did.Â  But it was the furthest thing from home.Â  Kidding.)Â  Anyway, I’m talking about people who live here. The traffic, blahblahblah.Â  The lack of a bustling downtown, blahblahblah.Â  The actor who wouldn’t shut up in front of you in line at The Coffee Bean, blahblahblah.Â  [whine]Â  The city’s too spread out, blahblahblah.Â  [/whine]Â  Everyone cops so much fake attitude everywhere, blahblahblah. “Why areÂ you still here?” Ah, life’s a journey.Â  And sometimes, you just run out of things to talk about. Since I have no roots here, if I didn’t like it, IÂ would’ve had no excuse to not pack up and head somewhere else, right?Â Â But here I am–five years since graduation.Â Â Granted, adjustingÂ was rough in the beginning (especially that attitude part for this Midwestern girl), butÂ ifÂ there’sÂ a vision you just needÂ some patience and a few additional skills to practice and developÂ to forge your own way so you don’t let the negative overcome you.Â  You know what?Â  You learn if it’s worth it, and then you learn to suck it up.Â  Everything else is just, distractions.Â Â  And then, you find out what absolutely amazing talent is everywhere in the city.Â  It comes with the territory that yes, there’s a crapload of crap too.Â  But if you’re too lazy to sort through all of it, it’s only your loss.Â Â TheÂ wealth of opportunities is here.Â  There’s so muchÂ opportunity to do good things, to make a great return.Â  California is the fifth largest economy in the world.Â  It’s the haven for small businesses andÂ heaven for adult AD/HD.Â  Crazy people are interesting, and only crazy people elect a bodybuilder for governor. What’s not to love as long as you’re south of The Valley and north of Orange County?Â Â Kidding.Â  Sometimes, I think how nice it would be to not have to drive too far toÂ be able to eat grubbyÂ Taiwanese and ChineseÂ food, but I don’t end up thinking about it too long.Â Â  I certainly didn’t move 2000 miles to forget the lessons of my minority youth to just … _be comfortable seeking refuge_Â on the other side of the train tracks.Â  I want to be driving the train.Â  Laying new track in, to and from both sides. Thanks for joining me, you guys.Â  This is allÂ very exciting!Â  I’d appreciate any feedback you may have about the site. Love, *e P.S. – I would really like to recommend toÂ you guys the German film,Â ”The Lives Of Others,” which won the Oscar for Best Foreign Language Film.Â  Absolutely well done.Â  Spellbinding.Â  Go see it. P.P.S. – We’re not doing anything about that MotherFlickr tab, so you might as well go ahead and chuckle to yourselves each visit, quietly.