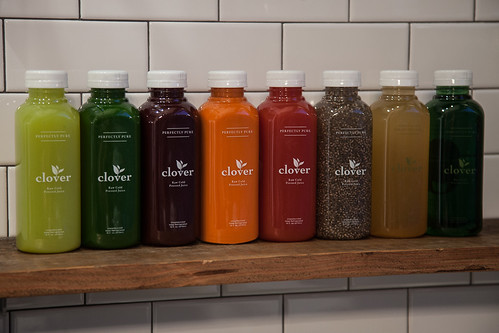 Clover Juices[/caption] I have to admit, I’m a bit of a procrastinator. Okay, let’s try that again. I very much leave things to the last minute, and now that the new year rush is over, it may just be time to do a juice cleanse. Though I’ve never done one, I’ve perhaps been inspired by my on-going, 2-month long Pilates-spin regimen. Let’s be honest: What I put into my body gets a lot more attention - despite all the events and dinners - whenever I’m working out regularly. Clover is fittingly located next to a yoga studio for the ultimate environment in mind-body conscientiousness. The organic juices support local sustainable farming with the produce it sources. But it doesn’t stop there; there’s also kombucha on tap, Stumptown coffee, food by Silver Lake’s Flore Vegan but also sandwiches by The Churchill’s Executive Chef Bruce Kalman. Pastries sold in-store will be created by Lauren Lobley of Charm City Cakes, which will also include vegan and gluten free options baked fresh, daily. And the juice, of course. Each juice is the equivalent to 3 lbs of produce, and will change seasonally based on what’s available at the farmer’s market. For the next week, Clover is doing a week-long promotion for their opening with 25% off their juices. Normally $70 per day with the option of a 1,3 or 5 day package, you’ll find them at these prices until January 30:

So…I don’t know. It’s going to be a big deal scheduling 3 whole days during which I’ll only juice. But it’s worth a try. Until then, I’ll see you at Clover during the week-long promotion!