Class 302: Where Ice Is Turned To Shaved Snow 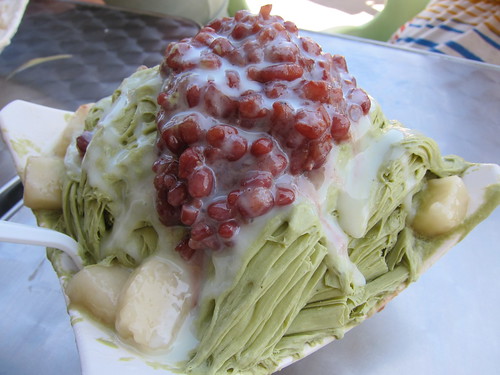 [/caption] With Southern California “June Gloom” wearing off now thanks to July, it has me craving cold dessert. Cold as ice - or, cold as snow in this case. [caption id=“” align=“alignright” width=“240” caption=“Mango Shaved Snow With Mochi”] 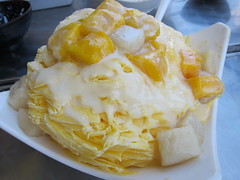 [/caption] I had heard about the “upgrade” to traditional Taiwanese shaved ice from Danny, CathyÂ and a few others, in that the condensed milk is actually folded into the ice for some serious creamy-sweet-cold integration. Whereas the plastic tops sealing cups of milk tea at boba shops were probably the last technology in Taiwanese desserts I was aware of, this one seems to be an actual revolution of dessert itself. I can get behind that. [caption id=“” align=“alignleft” width=“240” caption=“Pudding Shaved Snow With Syrup”] 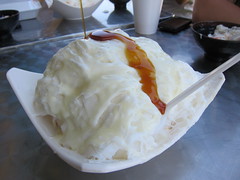 [/caption] When I saw that the snow actually came out in sheets,Â each dishÂ was a massive landscape and sweet firestorm to behold. No more crunchy ice or uneven distribution of condensed milk from bite to bite. Just good ol’, cold, sweet, softÂ and creamy (yet airy?) goodness. You can get varieties with caramel pudding on the bottom and syrup on top, another with strawberries and mango. My personal favorites, though, were the mango-flavored snow with mangos and mochi (for some potent mango goodness) and the green tea-flavored snow with red bean and mochi topping (expressly for your matcha tooth). On the weekend, you’ll be waiting quite awhile for a table at Class 302 (which is Taiwanese school code for 3rd grade, 2nd class) as they also serve food, but snow is hands-down the thing to get here. You’ll want some as we head deeper into the summer. Just remember: It’s even hotter in San Gabriel Valley, so bring friends to share flavors. More Taiwanese discoveries to come at later dates… A girl’s gotta reconnect with her blood-native cuisine, right?