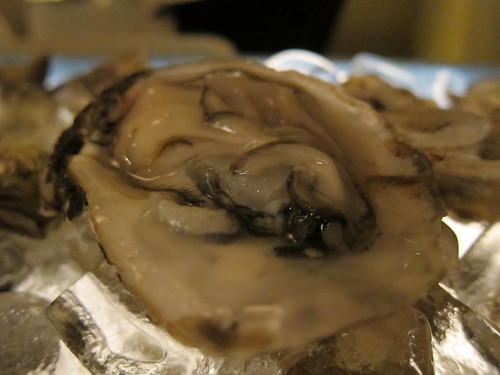 [/caption] It may have been another night out in the neighborhood for Chris when I met her and Ken at Joe’s on Abbot Kinney last friday. But it had been awhile since I had a drink from their bartender, S. Hector Bury - and he didn’t disappoint with a delicious cocktail made with bacon-infused bourbon. [caption id=“” align=“alignright” width=“180” caption=“Christophe Happillon”] 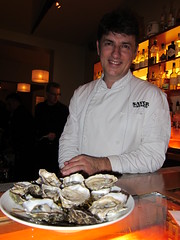 [/caption] But we were there to learn about Christophe Happillon’s oyster program, which is at Joe’s on Friday nights and The Edison on Tuesday and Thursdays. So, whether you’re feeling The Downtown LAÂ vibe early in the week or more in the mood for Venice towards the end, you know where to go for your oyster fix. Truth be told, I was also at The Edison for their latestÂ Radio Room just three days prior (which prompted Nico to accuse me of “cheating”) and had gotten a preview of Christophe’s awesome oyster display of Fanny Bay oysters. The real lesson would come at Joe’s, however, where he featured three different types of oysters. I have always loved oysters but knew very little - and was really appreciative to get a lesson in the West CoastÂ ones Christophe was carrying that night. [caption id=“” align=“alignleft” width=“240” caption=“Christophe shucking an oyster”] 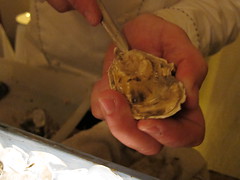 [/caption] When Christophe set to shucking oysters for us (“Oysters are like women -,” he mused, “you cannot force them”)Â he started out with San Quintin Bay oystersÂ from Baja, California. This was the strongest, saltiestÂ oyster of the bunch, with this particular bay not receiving much rain and therefore putting the oysters in an environment with more sediment. The next two oysters proved milder - as they were from areas also on the West CoastÂ but which had more rain and bigger waves: British Columbia. The Fanny Bay oysters, which were also at The Edison, had a tougher consistency than the San Quintins. Because there are more waves, the muscles in these particular had developed more than the previous variety.Â They wereÂ also not as salty as they grew in less sediment. The final variety, from Metcalf Bay, was also from British Columbia but was the sweetest of the bunch. Christophe pointed out the Metcalfs’ shells in particular - which were especially brittle - as the environment Metcalf has less waves than the San Quintin and therefore had less elasticity. In general, the more muscle an oyster has, the sweeter its taste. Now Christophe may be a French shellfish specialist,Â but he stresses that oysters on the half-shell are a primarily American dish. Think turkeys at Thanksgiving being stuffed with oysters, and the search for an aphrodisiac when primarily male emigrants relocated to the continent.Â Our time at Joe’sÂ was a great lesson in the history and origins of oysters’ chemistry, salinity and temperature, and I came away that muchÂ more knowledgeable about the bivalves. Now to eat more… ;) Half-dozen oysters: $17 One dozen oysters: $30 (Prices subject to change according to availability and market price.) Oysters in this review were hosted. 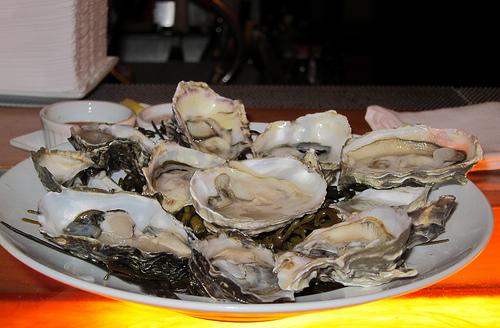