Choppe Choppe Culver City: Quality Lunch on the Go & on the Cheap 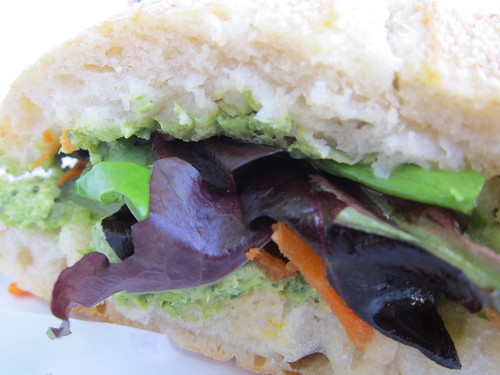 [/caption] Let’s say you worked in Downtown Culver City and were looking for a slam-dunk lunch option. It may be deceiving to the prejudiced eye (a sandwich for lunch, again?) but what if you knew the options at this product-centric lunch spotÂ included La Brea Bakery bread? That a lot of the recipes actually have an unexpected kick in taste thanks to its chef-driven fare and quality ingredients? You can get a variety of taste combinations in either a salad, wrap (regular or spinach tortilla) or sandwich (with that famed bread). And the soups are also solid, to boot. Try their heavenly mushroom brie or classic tomato basil. The Edamame recipe features a delicious, spicy pesto made with the legume. I find myself hardly missing the meat, which is great since I’m certainly getting the protein and the pesto itself provides a really good flavor. [caption id=“” align=“aligncenter” width=“500” caption=“Oxbow Sandwich (Rib Eye)”] 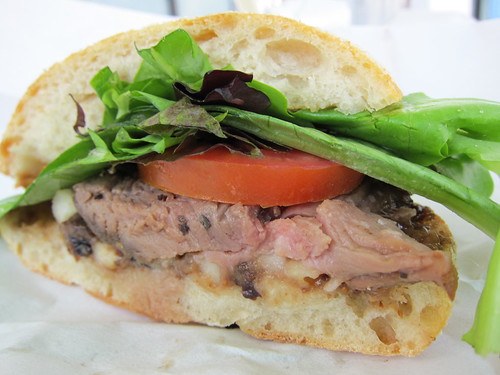 [/caption] The ribeye in the Oxbow sandwich was perfect - not too well-cooked and had a decent amount of pink. The surprise in this wasÂ the touch of sweet coming from the truffle honey spread. Delicious. [caption id=“” align=“alignright” width=“240” caption=“California Curry in Spinach Wrap”] 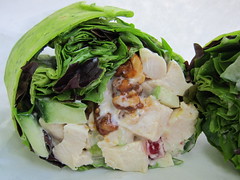 [/caption] Some of the sandwiches are carried over by chef owner Jeff Price from Skratch but I tried about half of them and all the recipes and ingredients were solid. You can even get an Americanized banh mi sandwich or wrap, but you can rest assured the pork itself is good. The California curry and Waldorf are similar - especially with chicken -Â but you’ll find grapes in the former and cranberries in the latter. The focus of Choppe Choppe is convenience, good product and ingredients at a reasonable price point - that is, $6.95 or $7.95 for a sandwich or wrap; soups and side salads are $2-3 each. People don’t come for the table service (because you won’t get any) and everything comes wrapped in paper - going more for a uniform recycling-mindedÂ business model rather thanÂ aÂ conservation-minded one. It’s right across from the Sony Pictures lot, so they have a loyal following carried forward from Skratch. But maybe for Choppe Choppe alone, I wouldn’t mind knowing I could get such a satisfying lunch in Downtown Culver City at a below-$10 price point. Right now, Jeff is alsoÂ finalizing aÂ dinner menu while making a few final tweaks to the recipes. Soon, Culver City diners willÂ also have a Choppe Choppe dinner menu at their disposal, too. All food was hosted.

Free parking in adjacent lot (in back)