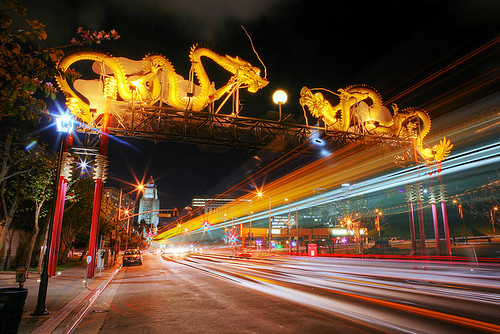 [/caption] It seems that August is quite the month to experience Los Angeles. And if you need ideas, start with the first ever Chinatown Summer Nights to get a taste of L.A.’s original epicenter of the Chinese American experience. Call it a revival of sorts - because we urbanites are tired of San Gabriel Valley getting all the attention, aren’t we? This Saturday and every other Saturday in August, Chinatown Summer Nights will showcase cooking demonstrations, the area’s restaurants and bars, stores and art galleries, music, martial arts demonstrations, interactive dance and movement workshops, family workshops and even temporary public art installations. And of course, there will be (OK, non-Chinese) food trucks - specifically Nom Nom Truck, India Jones Chow Truck, Spring Street Smoke House, The Patty Wagon, Papas Tapas and Fry Smith. One of the best perks of the festival is presented in the form of discounts to the local restaurants in Chinatown. Be sure to print the coupons since you’ll need them to claim your discount (or get your copy at the festival’s info booth). Participating restaurants will include Hop Woo, Golden City, Full House Seafood, New Dragon Seafood and Golden Dragon. Family workshops will run from 5 - 8 PM and cooking demos will take place in the West Plaza at 5 and 8 PM. Sharon Hoy, a top Chinese chef and cookbook author, and Eddie Lin of Deep End Dining will be the MCs. KCRW DJs Raul Campos, Anthony Valdez, Jeremy Sole and Aaron Byrd will alternate each week to spin tunes for your dancing pleasure in the Central Plaza.