Chicken Showdown: Ludo Lefebvre vs. Eric Greenspan at The Foundry 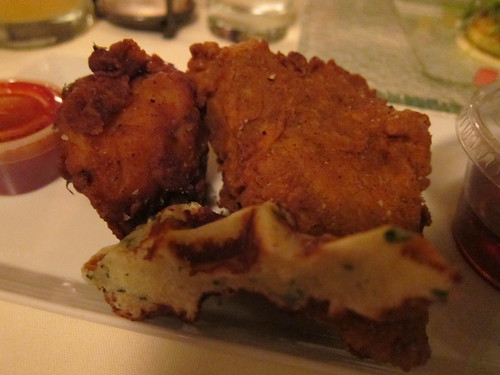 [/caption] It was a special night at The Foundry on Melrose, and the occasion would be my long-delayed first visit to the restaurant. After all, this is where a lot of the LA comfort food scene originated - Chef Eric Greenspan (2008 Grilled Cheese Invitational winner and once-Iron Chef contestant) plans to open a grilled cheese-only restaurant. Of course. [caption id=“” align=“alignright” width=“240” caption=“Whiskey Trollope”] 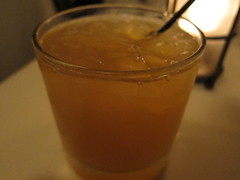 [/caption] Apparently, Ludo Lefebvre and wife Krissy were in the neighborhood only last Friday and decided to drop by The Foundry to say Hi to their friend. Chef Eric wasn’t there - to which Ludo said (tweeted), “I should take over the kitchen!” One thing led to another and lo and behold, Ludo didn’t exactly “take over” the kitchen so much as he agreed to drop in on The Foundry’s regularly-scheduled Bluesy Tuesday and showcase his chicken next to Chef Greenspan’s. Akasha Richmond was gracious enough to supply fryers for the special event - because we are all family here. The news was announced (albeit with an incorrect date on the flyer) and a flurry reservations were made for the special Tuesday night. For $6 per plate, diners could enjoy a piece of Ludo’s rosemary chicken and a piece of Greenspan’s bone-in buttermilk chicken. Maya of ShopEatSleep and I were happy to fill a 6 PM 2-top reservation - the very beginning of the night - because we could only imagine how crazy and possibly backed-up the rest of the night would be. Case in point: LA Street Food Fest and the cluster around the Ludo truck. [caption id=“” align=“alignleft” width=“240” caption=“Grilled Cheese With Talaggio Cheese, Raisin Bread, Apricot-caper Puree and Short Rib”] 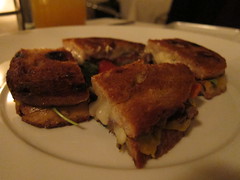 [/caption] Maya and I started out with an absolutely deliciousÂ Whiskey Trollope eachÂ - with ginger and pineapple - at a very reasonable $8. On top of that, the pineapple was a subtle finish and the drink overall wasn’t too sweet. Solid. The chorizo veloute with cornichon gelato on Jonathan Gold’s 99 Things to Eat in L.A. Before You Die brought me back to the bliss of Ludobites 2.0 (can’t let the leftovers from The Gold Standard - an event I missed - go to waste, now can we?). Since we wereÂ on Greenspan’s turf, we couldn’t pass up the grilled cheese ($9) as a lead-in to the chicken. So we did exactly that - with telaggio cheese comprising the center of a raisin-breaded sammich, encased between layers of apricot-caper puree and short rib (extra $3). While the grilled sandwiches were delicious, we were so relieved we weren’t full - yet. A fried green tomato would accompany our fried bird and alleviate our consciences a tadÂ in the area of poor nutritional indulgences while keeping with the Southern theme. Vegetable or fruit? I say it’s still up for debate - but the dish itself is a good punch in the mouth, complete with fresh tomato and arugula. [caption id=“” align=“aligncenter” width=“500” caption=“Fried Green Tomato”] 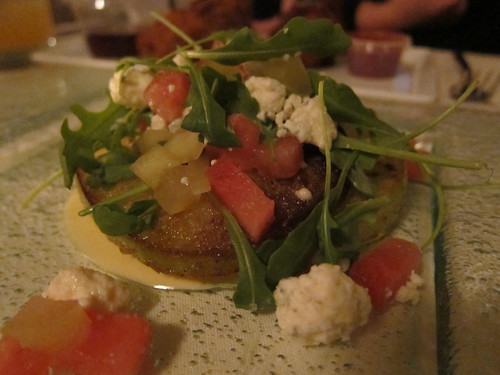 [/caption] Now, the chicken. If it really came down to it - which would be the better chicken? I resisted Krissy’s question because I really loved both pieces of chicken. And I mean this sincerely. They aim for different things - and they score. The sauce the Ludo chicken came with was spicy and sweet and an absolutely perfect compliment to the rosemary seasoning in his still-super-juicy, boneless chicken. The honey that accompanied Greenspan’s chicken went perfect with the buttermilk treatment as did the delicious wedge of goat cheese-tarragon waffle. Ludo’s chicken is beyond innovative; Greenspan executes a classic perfectly. And that is my final answer. I am a fried chicken lovah!! Where will Ludo go next? I’ve been spying some Twitter convos going on in the foodie cosmos lately. Dare we suggest another show-down with Greenspan’s grilled cheese and Ludo’s foie gras croque monsier? Or Ludo following the way of the fryer and dropping into Akasha Richmond’s kitchen? The real-time TwitterÂ food collaborationsÂ is just one of the phenomenons that makes eating in LA so exciting; stay tuned to find out… Further reading: Will Tweet for Food: Chicken Night at The Foundry - Jonathan Gold for LA Weekly Food