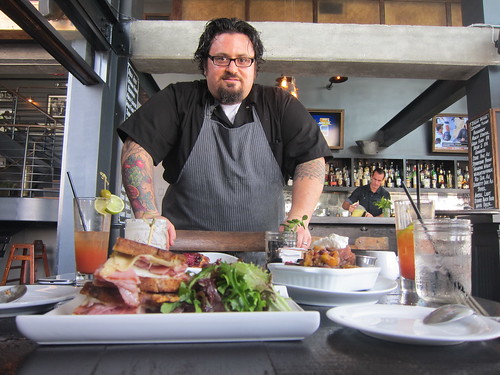 Breakfast or Brunch is Served[/caption] Brunch remains the fruition of the ultimate Southern Californian snub - a meal Angeleno dilettantes could fit into their schedules almost any day of the year if they wanted to, and on an outdoor patio, at that. While I once considered the tweener meal synonymous with a certain 3rd Street spot known as much for their celebrity sightings as for their fruit cup and egg dishes, brunch has become a fact of life. There is now no shortage of restaurants - most of whom don’t even offer lunch service on the weekdays -  who open early on the weekends for brunch. It’s become a ritual, a pastime that has become justification for that Friday or Saturday night hangover. With that comes competition and an audience that is no longer enamored with the existence of eggs on the menu. [caption id=“” align=“alignright” width=“240”] 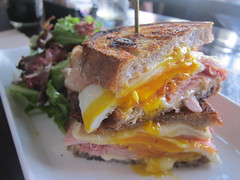 Croque Madame[/caption] That said, The Churchill files their egg and other offerings under “breakfast,” with nothing priced over $14. While the categorization is probably more a result of its location inside a hotel than a cultural statement, The Churchill’s Bloody Mary and bottomless Mimosa offerings betray its true intentions. No matter, because you should order the perfectly meat-to-egg-to-cheese proportioned Croque Madame, anyway. And you’ll find that filed under “lunch.” It looks as if James Beard-nominated Rising Star Executive Chef Bruce Kalman, who took over The Churchill just last September 1st, is putting the finishing touches on the menu, and the breakfast options are indeed the icing on the cake. Those who favor savory over sweet will be thrilled, as I was when I tried half of the offerings. But never fear, the brioche French Toast with spiced apple chutney and whipped créme fraiche was fall-appropriate heaven. The Bellwether Farms Cheese Blintzes, which were encased by cinnamon crepes of the perfect thickness, properly held the savory ricotta cheese. And there’s just enough fruit compote to consider it a sweet breakfast offering. [caption id=“” align=“alignleft” width=“240”] 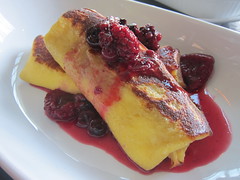 Bellwether Farms Cheese Blintzes w/Ricotta Cheese, Fruit Compote[/caption] The patio at The Churchill is sublime, but so is the grey-toned, subtly recessed interior when filled with natural light during the day, so you have your pick of breakfast views. And while you’re eating at The Churchill, you’ll be appreciative of all the local ingredients on the menu, no matter what meal you’re there to enjoy. The short rib in the Short Rib Hash also appears on the dinner menu, but both benefit from its 10-hour braise at an even 225 degrees. After all, it wouldn’t be a hash without putting an egg on it. If you’re craving Poached Eggs, Chef Kalman’s rendition comes complete atop two slices of toast slathered in Romesco but underneath slices of prosciutto. There’s no other way to describe this spicy, savory egg selection other than “simply divine.” And although there are no breakfast or brunch cocktails to accompany the stellar menu, available 7 days per week, Mia Sarazen’s cocktail menu is fair game, as evidenced by the awesome Old Fashioned I ordered during the tasting. That is more than great backup if that bottomless mimosa or Bloody Mary option doesn’t quench you. [caption id=“” align=“alignright” width=“240”] 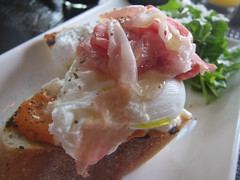 Poached Eggs with Prosciutto[/caption] There’s also some lighter fare that I appreciated, including a House Granola made with really tastily seasoned and crunchy granola, organic yogurt and fruit. The Steel Cut Oatmeal is made somewhat unordinary thanks to some maple syrup, brown sugar, steamed milk and steamed milk foam. Though breakfast is pretty much the hardest meal to argue with (other than the time of day it’s served, perhaps), I’ve rarely come across such a menu where I liked practically everything without getting tired of all the eggs. It goes to show that Chef Kalman has enough creativity to go around (besides my really liking eggs). And if you’re dining with friends who feel more like lunch options, simply make plans to come at 11 AM or later for ultimate brunch customization since that is when the lunch menu items become available, such as the Croque Madame. What the quality of the overall menu, including breakfast, goes to show is that with the advent of Chef Bruce Kalman’s takeover, not only is his talent for comforting dishes on display, but a great eye for editing. There are no more than 10 items on the breakfast menu, plus $3 sides, should you want them - and they are all bound to sate your early morning or afternoon hunger. It’s a great time to live in that neighborhood which borders both Mid-City West and West Hollywood, especially now that a solid, dedicated breakfast destination - one not reliant on pure scene - has appeared on 3rd Street. Now to return for dinner… All food and cocktails were hosted.

Lunch options available at 11 AM