Checking Out The Parish With Glenrothes Single Malt Scotch Whisky 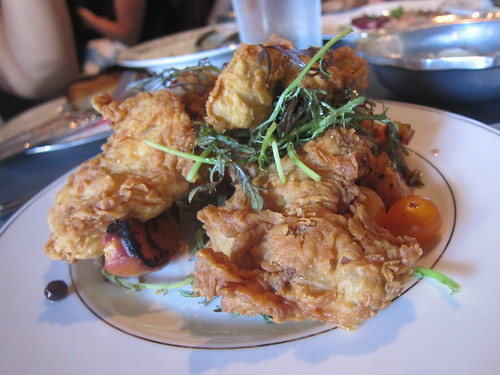 Fried Chicken, Grilled Peaches, Tomatoes & Currant Vinaigrette[/caption] My 2-day crash course in all restaurants Casey Lane was a bit of an accident. I scheduled a business brunch at Tasting Kitchen on Venice’s Abbott Kinney while not realizing that a media lunch at his new, cross-town joint, The Parish, was to take place the next day. But I found no coincidence in the fact that both places serve stellar food - Downtown Los Angeles should be so lucky to receive such an addition by Casey, who brought the concept of farm-to-table to fruition before the term got hackneyed. (Soon, Melrose will get their own dosage in Itri, a pasta shop.) [caption id=“” align=“alignright” width=“240”] 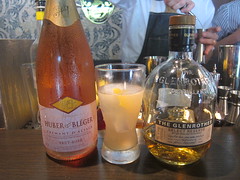 Scotch Lace with Glenrothes Select Reserve[/caption] While I missed the one-month-ago opening since it was during Tales of the Cocktail, I was lucky to have gotten my first taste at a Glenrothes Scotch Whisky lunch. (As this was a special event, The Parish isn’t open for lunch - but it seems as though they are aiming for breakfast service in the near future.) What a treat it was to have tasted The Parish’s stellar food alongside one of the top three Single Speyside Malts in different vintages: 1998, 1988 and, ultimately, the 1978. We started out with a Scotch Lace, John Coltharp’s variation on a whisky sour, but utilizing Glenrothes Select Reserve with a splash of Rose. It was super refreshing (especially since I had Metro’ed and biked there) without much tartness at all. [caption id=“” align=“alignleft” width=“240”] 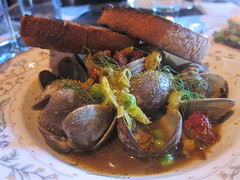 Clams, Salumi Picante, Sherry, Leeks & Peas[/caption] As we sat down for lunch, we tried the Glenrothes 1998, which imparted vanilla and creamy notes. We were encouraged to open it up a bit with water, as “complex whiskys have no fear of water.” As for food, it was paired with Beets, Mache Herbs & a deliciously but subtly sweet Molasses Yogurt (you’ll find a horseradish yogurt instead in the regular menu), Grilled Corn with honeycomb butter, Butter Lettuce salad and Wood-grilled Bone Marrow. While it took all of my self-control to refrain pouring the Glenrothes 98 down the center of my hollow bone for some boneluge action, it was a beautiful study in whetting the palate to the Glenrothes vintages and pairing that to the sweet and savory food. Next was the Glenrothes 1988, a 43% ABV vintage bottled in 2011. This more mature vintage tasted a bit richer, like candied orange peel. The Clams with salumi picante, sherry, leeks & peas was definitely a stand-out dish. I found myself directly spooning the sherry broth as if a soup; the grilled, buttered bread couldn’t sop that flavor up fast enough. The salumi gave it good girth, and the leeks and peas were nice spice and sweet touches. [caption id=“” align=“alignright” width=“240”] 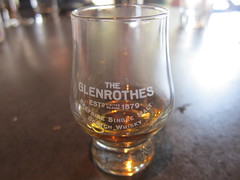 Glenrothes Vintage 1978[/caption] But nothing could’ve prepared us for the Glenrothes 1978, a vintage that is, indeed, older than I. Amazingly complex, with notes of dried citrus fruits yet almost even jam and creme brulee, the 1978 was nothing short of fantastic. It was good that the Fried Chicken held up to snuff with the Scotch Whisky. Though you’ll find it on the menu currently with heirloom tomatoes and arugula, there was an art to the addition (in this lunch) of grilled peaches, tomatoes and currant vinaigrette. The slightly sweet additions brought out the citrus and even pudding notes in the 1978. Of course, the true art was in the batter and frying - and at The Parish, you can be sure the fried chicken - in whatever rendition - is a go-to. By the way, the MSRP on a bottle of 1978? $700 USD. As for desserts by pastry chef Brooke Mosley, there was a super buttery shortbread to be topped with a Dulce de Leche cream and Fig compote. It was the simplest but tastiest dessert, which just melted in your mouth when complemented by the 1978. Overall, it was a fantastic experience led by a first rate Scotch Whisky at an overall stellar restaurant - from what I could tell at lunch, anyway. I can’t wait to visit The Parish on a regular night and enjoy the wood-adorned space. Its peninsula-like corner spot in Downtown Los Angeles brings a unique urban feel to the English-influenced dining experience. I can tell great things are in store here…including the cocktails.