It’s hard for me to put into words the emotion that has surrounded this entire Presidential campaign. Obama referenced Dr. King’s term, “the fierce urgency of now” when he announced his candidacy. And maybe not in so many words, but that was the essence of what I felt when I knew I had to do something to help him get elected. Anything - like drive to Nevada and canvas there. I have believed in him - oratory and inexperience considered - from the beginning, even more than Hillary. To me, his speeches were and never are just words, but eloquent articulation communicating a broad understanding of issues he has weighed time and time again. His charisma isn’t empty, but a fresh and graceful challenge to our lowered standards of Presidential rhetoric and diplomacyÂ as a direct result of the past 8 years. The General Election was quite an animal. The mere prospect of the alternative being elected was just not something I could face myself with if I had not done my part. I won’t lie and say that “negative” motivation wasn’t also factor. Everything that came up Ayers, socialist, Hussein, Wright or non-policy in general, fueled me as well. But Palin scared me the most and and that was that. 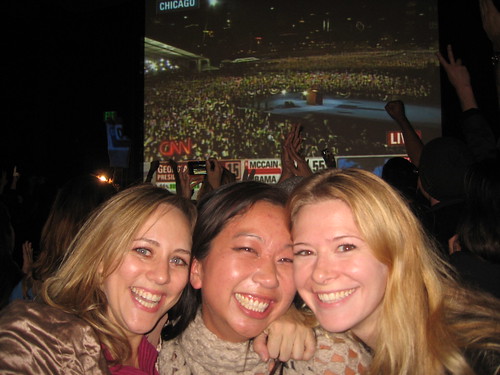 I definitely felt all of that come to a head in that large room at the Hyatt Century City. I don’t know that it’s all really sunk in, actually. All this and more rushed through my head as my best girlfriends and I walked into that room, immediately before Obama had acquired more than the 270 electorals needed. Just 10 minutes prior had we gotten dropped off by a cab, scoped the 100-yard line of people wrapping around the hotel and said, “No way.” Luckily, I remembered from a long-past company holiday party at the same location that the big room was downstairs and that we had come from underground to cross the street. I had spied from that outdoor stairwell an open entrance withÂ  volunteers milling around inside and said we should go back. As we strutted in like we belonged, I did a quick check to make sure there wasn’t a qualifying wristband or badge everyone had on and there wasn’t, so we were safe. And that was when we bought drink tickets, got our first glass of wine and walked in literally 5 seconds - at 8:00 - before they called the electoral college for Obama. I am convinced this is no coincidence because after all, we believed we belonged there. But being around Obama volunteers, supporters and even union leaders and celebrating with them was like no experience I’ve ever had. The memory of carpooling with other strangers-become-friends, going door to non-foreclosed door in Henderson came back. All of it was so moving that before McCain’s graceful concession speech and before Obama’s acceptance speech, the realization, the weight - and lightness - caused me to just stand there and cry for 5Â minutes. My friends and strangers nearby understood and hugged me, and through my tears I heard, “Aw sweetie, it’s okay. I know how you feel - but I’ve been crying all day!” We clinked plastic wine cups with strangers, cried with them, shook hands with them, hugged them. And then it was time to send love to Chicago from Los Angeles. Â

The rest of the night was marked with intriguing conversations with others in the bathroom line, in the line for the bar, in the general lobby. It was interesting to learn of different unions who sent volunteers and representatives…not withstanding the lifeguard union. (I remember acting impressed if not to be polite. I mean, what do you say when someone asks you - first thing -Â ”What do you think about lifeguards?“) B, C and I danced up a storm for a little bit while Shepard Fairey (the HOPE poster artist) DJ’ed. Yes, he DJs too. We didn’t see Pierce Brosnan, Zooey Deschanel nor Sarah Silverman as was touted in the invite, but then again it’s not like we had remembered to look for them. Everyone had the means to amuse themselves, and amuse we did. Case in point: My friend Rob also pointed me in the direction of this tidbit of amusing coverage on Fox11 News, in which the anchors smell a little something fishy in the air. ;)

Of course, I don’t expect a perfect term or a perfect President, but I made the choice to support him 20 months ago and boy has it been worth it. This memory will last forever.

Time to get to work.

You can also view: