Cecconi's Offers a Scene With Substance 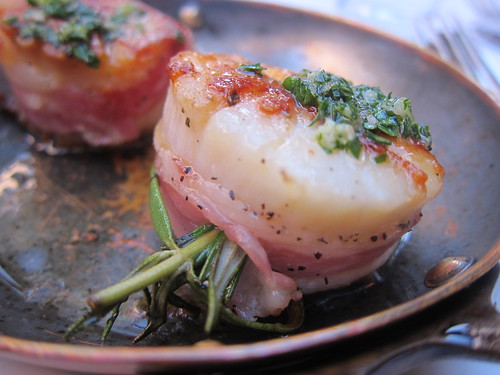 Pancetta-wrapped Roasted Scallops with Rosemary[/caption] There are a few places to eat and drink in town that I might be guilty of having prejudged based upon what I know about their location and reputation. I’m not saying that restaurants that are celebrity favorites couldn’t possibly serve good food. But let’s be honest, we’re afraid of risking bad service at a “hotspot” as non-celebrities. The food’s probably more expensive. And lest we be mistaken for those scenesters who seek validation via famous elbow-rubbing… *shudder* [caption id=“” align=“alignright” width=“240”] 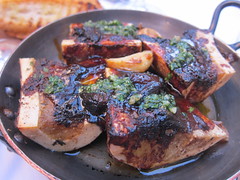 Wood Roast Bone Marrow, “Agrodolce”[/caption] (Can anyone tell me if The Ivy actually serves good food and provides prompt service in a manner on par with the concluding check? And how is that service - and how famous was your “up-and-coming waiter” - at Gjelina?) In a former life, Cecconi’s was still Morton’s and the site of Elton John’s post-Oscar party, wherein my college girlfriends and I cruised by just to get a glimpse of some major motion picture star waiting for valet. Internally, I made the location die in relevance along with my n00b Angeleno self. Full disclosure: Leave it to a media dinner to allow me to reassess. I don’t valet. I drive a convertible with the top down all the time (now with the weather being warm) that, in what I am sure is a subconscious way of acting out my love-hate-love LA self, I keep so dirty you could write “Wash me” on my rims in brake dust. [caption id=“” align=“alignleft” width=“240”] 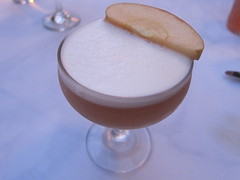 Pink Lady (Bombay London Dry Gin, high proof apple brandy, housemade grenadine, lemon, egg white)[/caption] But let me describe what a great time I had a Cecconi’s. While I don’t comment on service when it’s a media dinner, I have to say that I immensely enjoyed all the cocktails, which had stronger pours than I expected (don’t be fooled by their often pinkish colors). The food was not ground-breaking but appreciatingly solid in their execution. Gin lovers will appreciate this 14 drink menu and some selections, like the Mexican-influeced Jalisco Sour or Picante Paloma, will surprise you. The selection on the menu is especially savvy. There’s variety without the dangers of being overwhelming. Clear categories line the all-day one pager from apps to salads and ”Carpaccio & Tartare.” “Charcoal Grill” and “Wood Oven” items are the priciest yet half-portions are available for all the salads and almost all the pasta and risotto. In combination with the tasty, Italian-influeced cocktails, it’s all perfect for a day on the patio with the ladies. [caption id=“” align=“alignright” width=“240”] 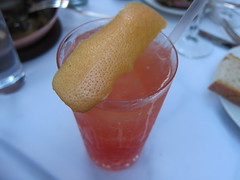 Picante Paloma (Cazadores, Aperol, fresno chili pepper, grapefruit, agave, sea salt)[/caption] Their most popular items, and understandably so, are highlighted as Cicchetti, which are also served in the middle of the day. They effectively supplement or comprise your meal, these Italian “tapas” (the scallops and bone marrow qualify as such). But don’t gloss over the pasta (I have a hard time doing so, anyway). Their linguine with clams comes flavored with a bit of sea urchin and the rabbit pappardelle is as solid as any in the city - or even better - as there were generous yet complementary chunks of meat in lieu of the usual strings of meat I often see interpersed between the fat noodles. And it was all al dente. The best part in regards to the pasta is that they’ve just released their Tris di Pasta special on Tuesdays at dinner: Try a sampler of 3 rotating pastas for $18. They’ve also started to feature a different, seasonal pizza with ingredients sourced from the local farmer’s market on Wednesdays. And back on that celebrity tip: Our table, which was positioned on the beautiful outdoor patio separated from the driveway by foliage as is typical for Melrose place, sat next to another who was celebrating the wrap of a certain dance competition TV show while I spied a certain Elizabeth Taylor impersonator at the bar. So that celebrity factor was certainly still there; it just failed to validate my prejudices. Prego. (All food and drink were hosted.)