Burgers and Beer In Session at Public School 612 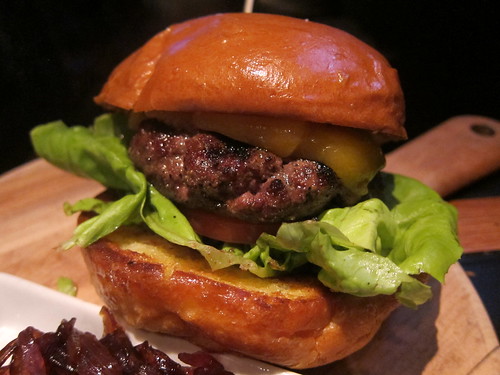 [/caption] The people behind The Daily Grill, one of the most recognizable chain restaurants in LA and beyond, have added gastropubs to their repertoire through Public School 612 - the sister and adjacent restaurant to The Daily Grill downtown since last March. [caption id=“” align=“alignright” width=“240” caption=“Pub Burger Cross-section”] 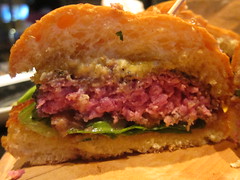 [/caption] You order at the bar at this new casual hangout, but don’t leave the counter without first choosing your beer. They’ve 20 beers on tap with half of those rotating, and 12 more in bottles and 5 in cans. There’s a decent-sized menu for grub, beer and spirits so there’s pub fare for everyone. When it comes to burgers, I’ve noticed there’s a complicated relationship between the customer, server and chef when it comes to the “wellness” of one’s burger patty. This became ever apparent since my guest at The Daily Grill was one who prefers “still moo-ing” to my medium rare. Though “pink through and through” is a real preference of his, I’ve known some to order their burgers one grade rarer as a result of chef distrust. Depending on the restaurant, there’s an assumption that the chef will always leave the beef on the grill too long for health code or safety reasons (Islands Burgers and e.coli in early 2000’s).Â  Then again, maybe the chef knows something about the meat that the customers don’t? [caption id=“” align=“alignleft” width=“240” caption=“Bar”] 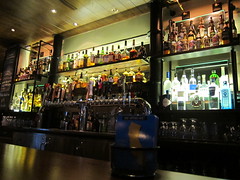 [/caption] Public School 612 effectively brought out that seared, rare Pub Burger. It had really good flavor while still falling under the Classic Burger column. No toppings (or the variety of such) are used as a crutch, and, as if for emphasis, even the very delicious balsamic onions the Pub Burger comes with are left on the side so you can dress at will. The bun was perfectly buttered, toasted, textured and sized, to boot. It was a great, basic burger. For those looking for something a little bit removed from basic, try the Colorado Lamb Burger. Yes, it also comes with brie and tomato cranberry jam - but you’d have to try it to believe just how well all these things work together. The lamb burger is served in the same stellar bun, and even a lamb-shy diner might change his mind after one bite. [caption id=“” align=“alignright” width=“240” caption=“Interior”] 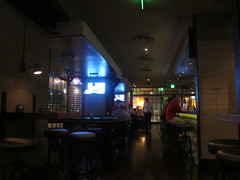 [/caption] I chose a pint of refreshing, summer-perfect Craftsman Triple White sage to wash bites of these burgers down. Be sure to visit Public School often to taste their rotating taps since they have a decent selection thanks to Hallie Beaune, one of two Beer Chicks. Also, the fries are fresh-cut and probably won’t disappoint. On my visit, though they were tasty, they turned out a tad golden - with the latter being an observation the GM made when he came over to the table. An aberration, he said. If you’re not feeling the beer, they’ve also a couple cocktails but really, all the brown spirits you need to enjoy with or after your burger. The atmosphere is conducive, as well, with dim lighting, communal high tables but also an attractive and pleasant bar to sit at or order from - whichever you choose. I had a great time playing darts (free with your driver’s license on deposit) - and since the place is new the darts and board are still in great shape. All the better to lose three games of Cricket with, my dear. [caption id=“” align=“alignleft” width=“240” caption=“Menu & Beer”] 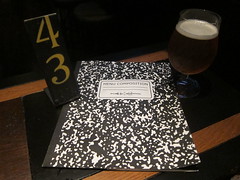 [/caption] It’s not as if Downtown L.A.’s Financial District was in lack of places to hang out, but it seems like Public School 612 provides not just the drinks and vibe, but also great food and games. In a time of my life where I’ve most shunned malls and chains, it’s ironic to see that perhaps Public School’s strength is derived from being an offshoot of a major chain (you can find The Daily Grill in Washington D.C. and Illinois as well). Bottom line? The burgers, beer and spirits selection are solid and if you bring great company, there’s no reason why you won’t have a great time. Educate yourselves, Downtown Los Angeles. P.S. - Though you can’t get a burger at a discounted price, check out their happy hour, anyway (M-F, 4-7 PM). Nothing is over $4 and they have $5 Margaritas and $10 carafes of wine. They also have a $4 tap handle available all night, so check out what that is. All food and drink were hosted.