Brunch at The Hollywood Corner: For The Locals 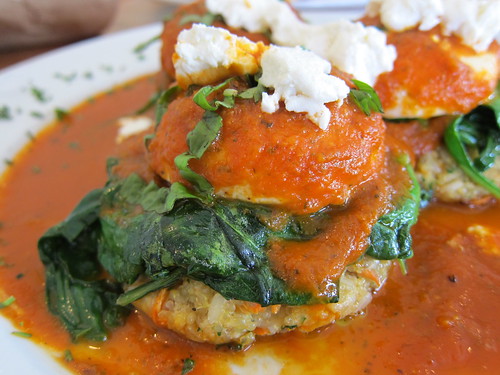 [/caption] It was a lateÂ Sunday morning when I visited the Hollywood Corner for brunch - a lucky, not omnicient, decision though I’d be negligent if I failed to disclose the decision was influenced by the bottomless mimosas (available duringÂ Sunday brunch $14.95).Â Breakfast will keep your bubbly company, however, since it’s served until 3 PM. [caption id=“” align=“alignright” width=“240” caption=“Breakfast Tacos With Chicken Chorizo, Scrambled Eggs, Roasted Tomatoes, Avocado)”] 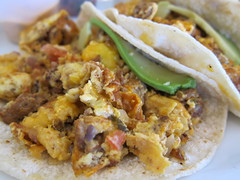 [/caption] The good news is that you don’t have to rely on the bubbly and can count on a solid brunch at this neighborhood spot located just south of Hollywood and Highland. Yes, you heard right: It’s a neighborhood spot in the center of Hollywood. Because you were never the type to shove spicy tuna rolls in your trap to the tune of Ke$ha and would rather save the greasy grub trips to Mel’s for late night. It’s a great way to enjoy a Hollywood Sunday morning, with a casual but pleasant brick wall-linedÂ bar and dining roomÂ that allow in plenty of natural light. The menu features vegan, vegetarian and heart-healthy items - a decidedly California diner smorgasbord … with pizzas sprinkled on top. And for dinner, they have Turkey Meatloaf, Buttermilk Fried Chicken Breast and yes, a Smac and Cheese (shrimp, Applewood smoked bacon, grilled corn, roma tomatoes, scallions with 3-cheese sauce)Â - the ingredients of which entice me toÂ order on the revisit. [caption id=“” align=“alignleft” width=“240” caption=“Caprese”] 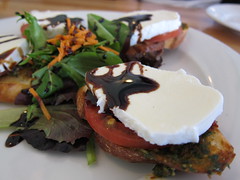 [/caption] My web designer and brunch companion Roycifer and I were shown a few starters and signature bites that areÂ popular with their loyal clientele - one of them being fried pickles. I could eat pickles every morning if fried to the perfect texture - and Hollywood Corner made the cut. The pickle was still juicy and the breading was nice and crispy.Â Also done very well was their Caprese atop buttery grilledÂ breadÂ with a tangy-sweet balsamic reduction. But back to the brunch, for which I ordered their version of a Benedict. Not Hollandaise but marinara covered quinoa cakes in lieu of English muffins, spinach in lieu of ham.Â The eggs were perfectly poached andÂ completed the creatively healthy yet substantialÂ and tasty dish. My web designer and brunch companion Roycifer ordered and really enjoyed his Breakfast Tacos, which centered around scrambled eggs and chicken chorizo. I had a bite and though not mind-blowing,Â thought it had good flavor for such a basic dish. [caption id=“” align=“aligncenter” width=“500” caption=“Almond Brioche French Toast”] 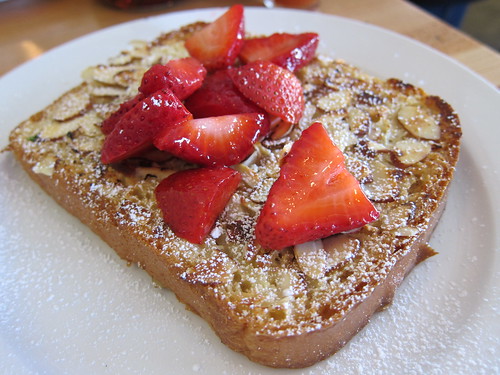 [/caption] Breakfast wouldn’t be complete with a sweet French Toast or Pancakes dish - and the Almond Brioche French Toast fit the bill. The strawberries were fresh and the brioche was battered to the perfectÂ texture. I just wish I had more room left in me to eat more (no matter, I had them for breakfast the next day). Indeed, this California diner is a great place to evoke that Hollywood-as-home feeling with its reasonably-priced, health-conscious andÂ locally-minded fare. I can see myself returning for a light lunch, dinner or Sunday brunch yet again. All food and drink were hosted.