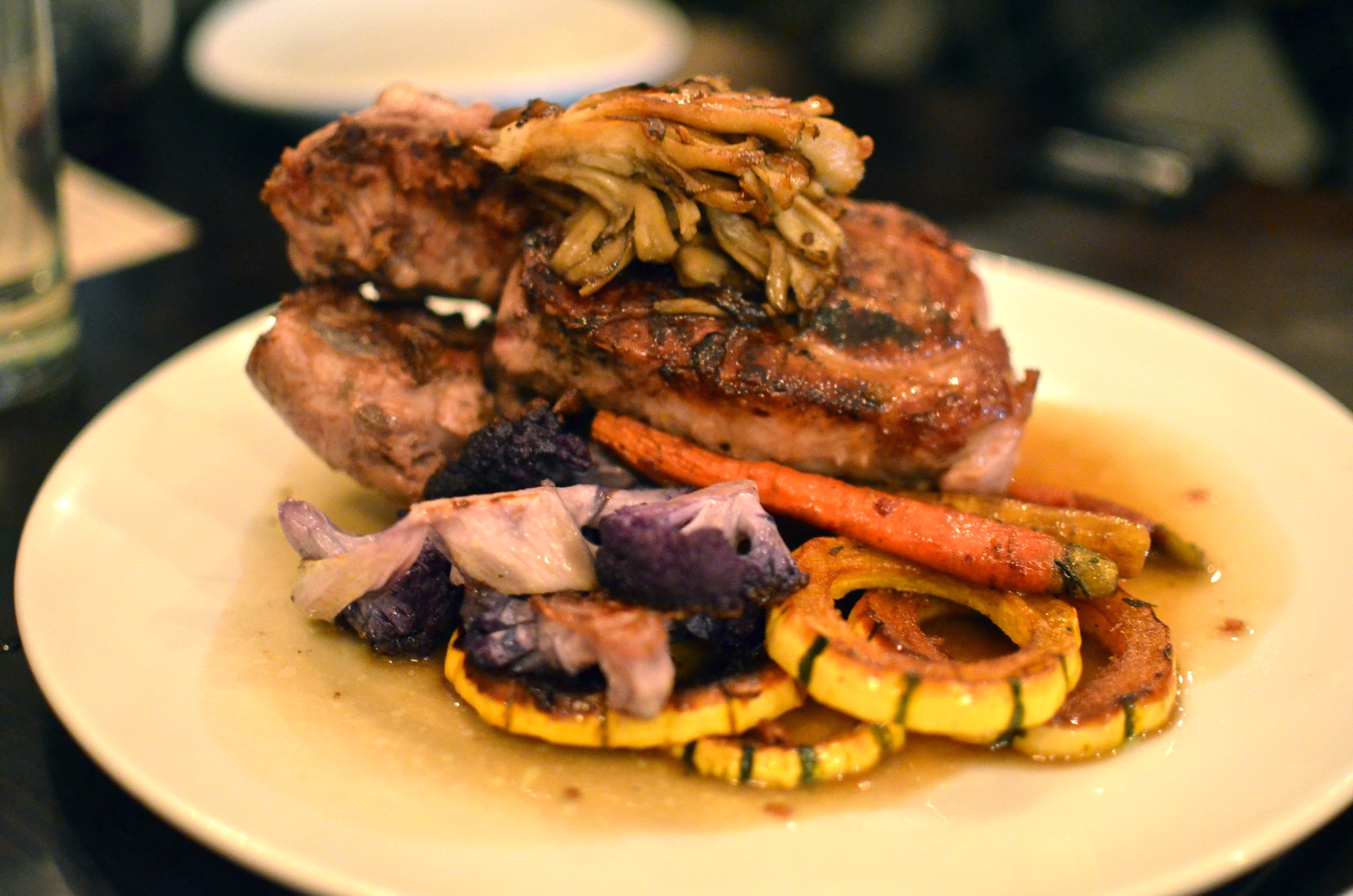 Smoked pork chop, market vegetables, wild mushrooms, Marsala, sage[/caption] Though I’ve been hearing that, as of late, there are more and more reasons to eat in Pasadena, I’ve admittedly yet to fully experience many of those restaurants for myself. So it made sense that I might start with Union Pasadena, where diners are enveloped in a haven of Chef Bruce Kalman’s (formerly The Churchill, The Misfit, Urbano Pizza Bar) comfort food. [caption width=“1024” align=“alignright”] 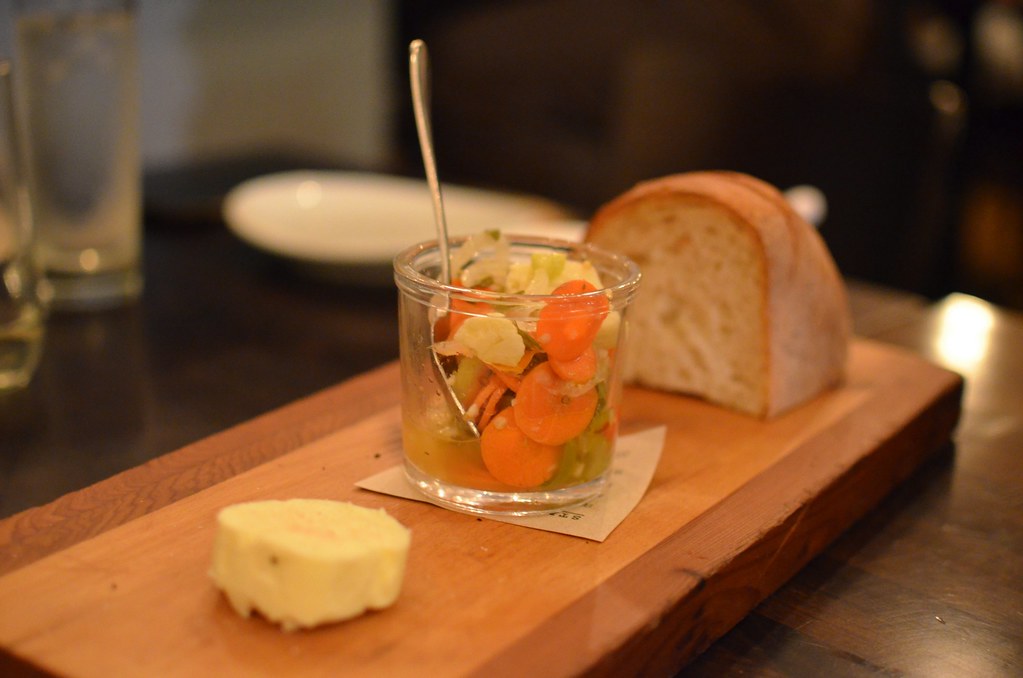 Bread & Giardiniera[/caption] There are small plates but there are also big plates, and the overall atmosphere is somewhat evocative of a dream. Dim lighting, brick wall, overhead chalkboard, a small bar, and a low hum emitted from surrounding epicures. As you approach a sated state with Chef Bruce Kalman’s rich yet flavorful food, you become closer to realizing rustic nirvana. [caption width=“1024” align=“alignleft”] 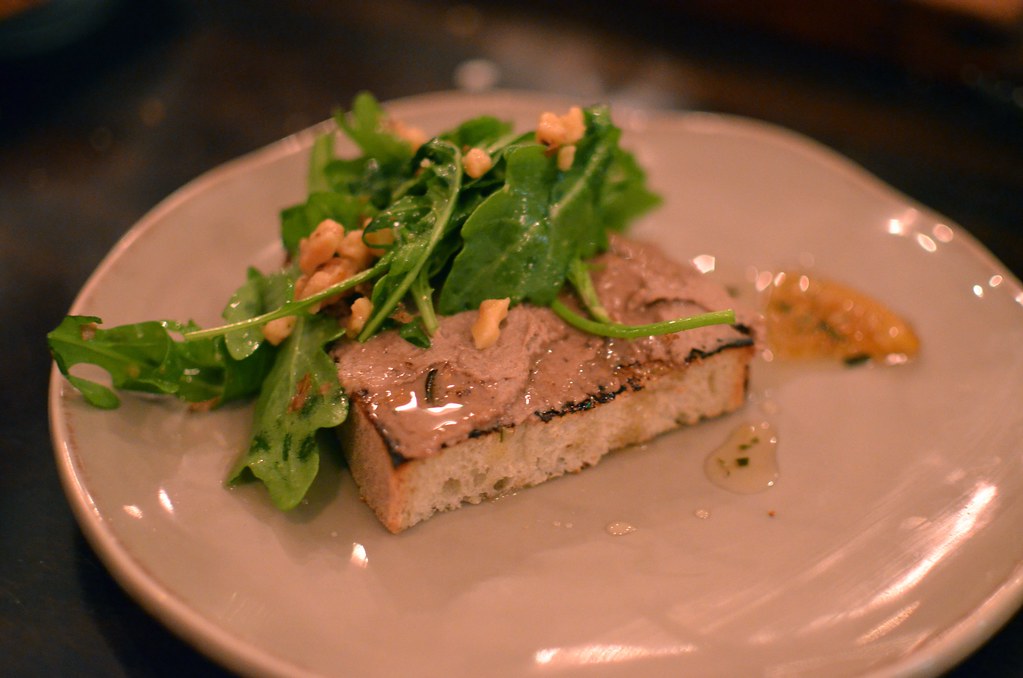 Duck Liver Mousse Crostini[/caption] Former Spago Sommelier George Pitsironis poured some great pairing wines for us the entire night, starting with a 2012 Trione Chardonnay from Russian River Valley, going on to a 2012 Ettore Germano Dolcetto d’Alba Lorenzino and finally a 2012 Langhe Nebbiolo from Cascina Roccalini in Piedmonte. It was great how well the wines paired with a few dishes at one time. [caption width=“1024” align=“alignright”] 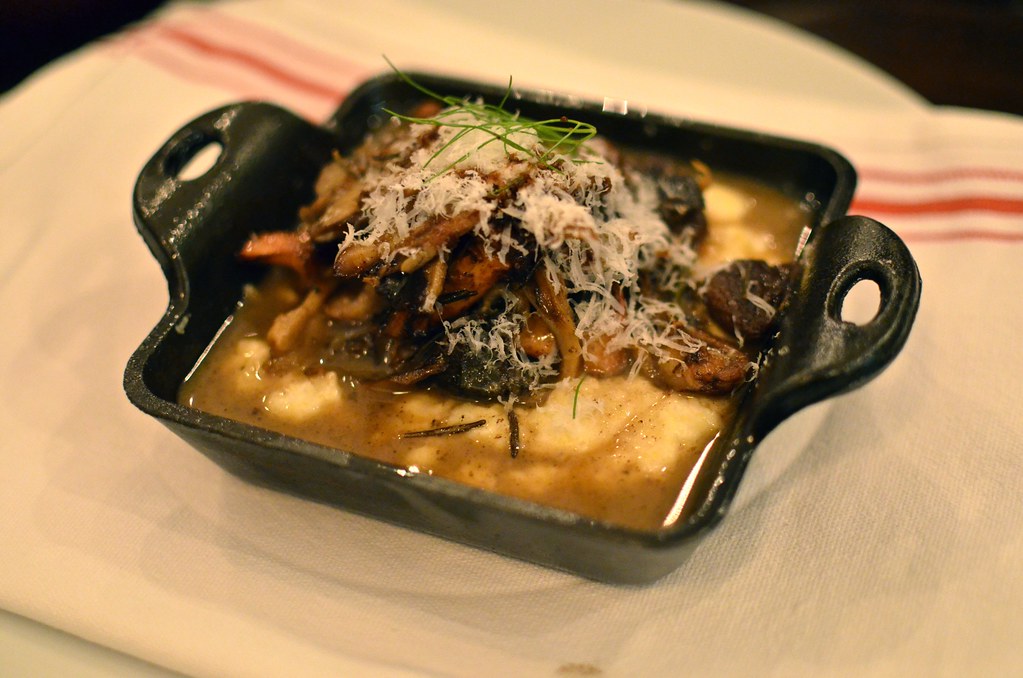 Wild Mushrooms[/caption] Thanks to Bruce’s side business, there are pickles to start your meal along with bread and housemade cultured butter. There are also delicious pork and lamb meatballs perfectly seasoned with Calabrian chiles and caper berries in a San Marzano tomato sauce (at least during my visit) for extra bright flavor. The Duck Liver Mousse Crostini also is a great start, with an extra smooth texture underneath a slightly sweet orange marmalade and walnuts. I didn’t quite get on-board, however, with the Stracciatella, served with Rosemary Focaccia and smoked sea salt, the latter two of which seemed to overpower the especially mild soft cheese curd. And boy, do I love cheese curd. [caption width=“1024” align=“aligncenter”] 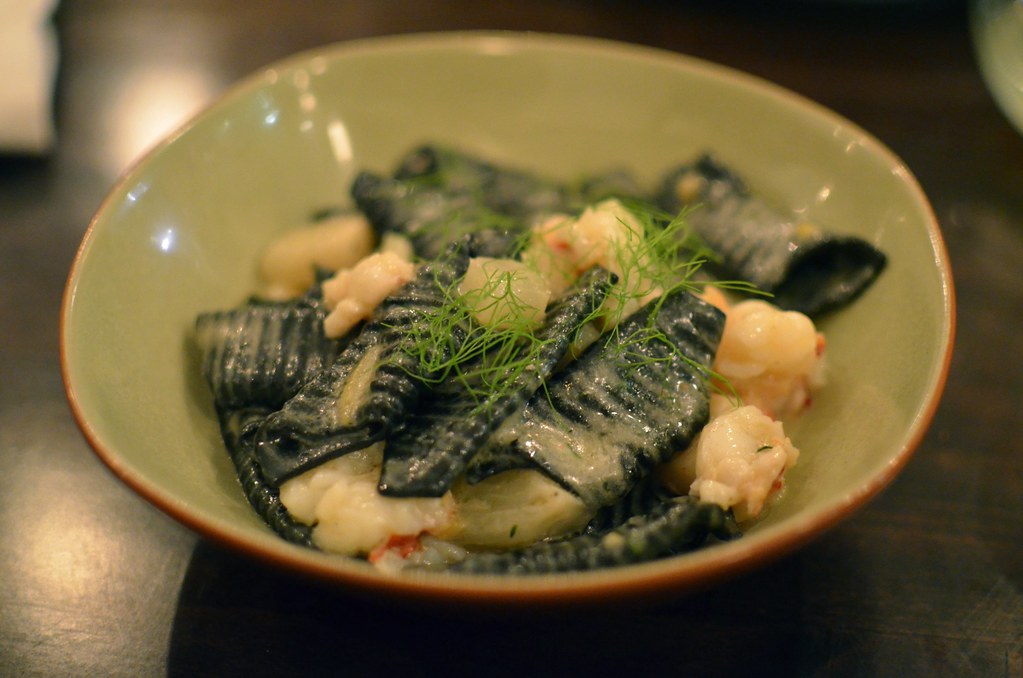 Squid Ink Garganelli[/caption] The middle of the menu, though, is where I really appreciated Bruce’s flavors, starting with the Wild Mushrooms cooked in Pedro Ximenez sherry vinegar for subtle acidity and even sweetness, served with polenta made with Grist & Toll flour. [caption width=“1024” align=“alignleft”] 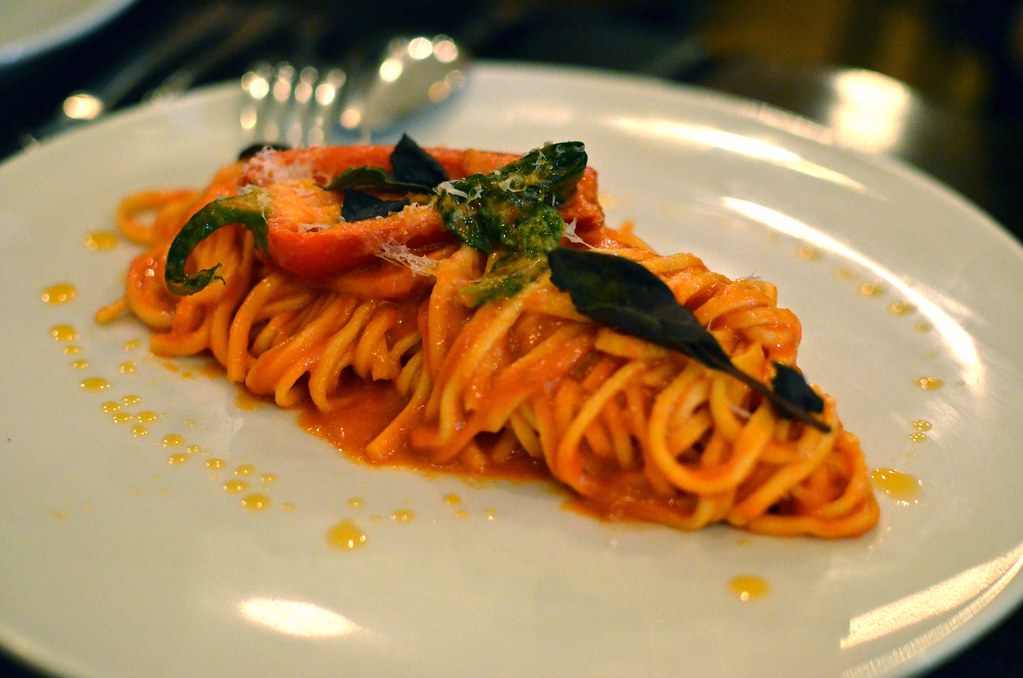 Spaghetti alla Chitarra[/caption] And then there were the great pastas. Favorites included the Spaghetti alla Chitarra in a San Marzano tomato sauce, with garlic and fresno chile as well as the requisite Squid Ink Garganelli, served with chunks of lobster, fennel, preserved Meyer lemon for that acidity and truffle butter for extra indulgence. [caption width=“1024” align=“alignright”] 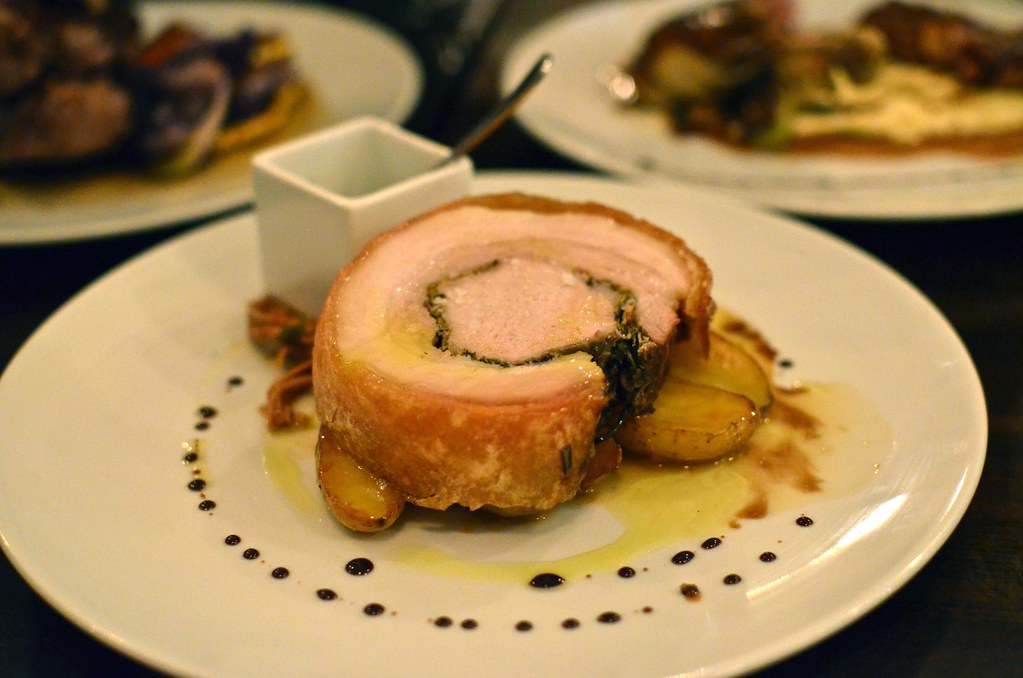 Porchetta[/caption] Of course, if you’re going to commit to a full experience at Union Pasadena, you won’t be skipping over the Mains - and for good reason. We went with what turned out to be an expertly rolled Porchetta, yielding extra tender flesh on the inside and a deliciously thick and crispy crust on the outside. It came with (who else?) Weiser Farms potatoes, under a drizzle of salsa verde. The Piman Farms Roasted Half-duck was also lovely- as in extra rich, savory and juicy. It’s sliced upon presentation and topped with a red wine-sage sauce, saddled with more Grist & Toll polenta. [caption width=“1024” align=“aligncenter”] 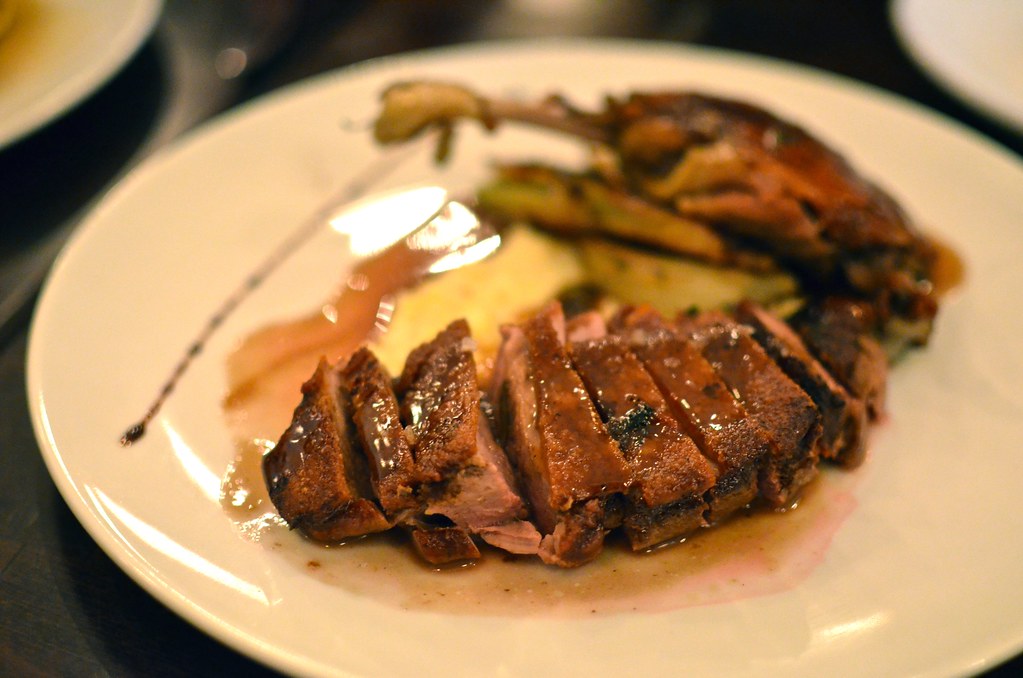 Pitman Farms Roasted Half-Duck[/caption] But the real shining star was the Smoked Pork Chops (title photo), with market vegetables, oyster mushrooms, Marsala and sage. The generous portion had a great, spice-rubbed crust on the outside while maintaining an extra juicy inside. Desserts were a little lackluster, but it didn’t take away from the overall meal. The best bet is to go with the Gianduja Chocolate Budino, the salty-sweetness of which is a perfect end to a stellar meal. All food and wine were hosted.