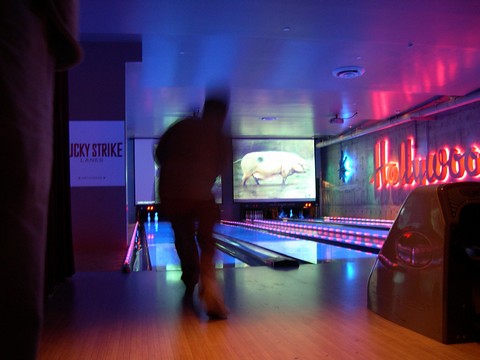 [/caption] Having grown up in the former bowling capital of the world, I’ve had my fair share of childhood birthday parties held at bowling alleys. Though I never learned to curve the ball down the lane, bowling is a special pastime that holdsÂ a kind of nostalgia. There’s nothing like a little Hollywood glitz to go with your 10-frame game, and Lucky Strike would be exactly the place to get that. Now for a limited time, you can claimÂ 1 free game and 1 free shoe rental per person with the magic phrase, “Swayze sent me for the special.“Â And as part of their latest social media push, they’re alsoÂ launching a birthday party list point system via Peer Squared, which earns you points as you add people to your guest list. So if you plan on having a bowling birthday party - or even if you don’t - you can earn points on the Peer Squared site to be redeemed for schwag or even charitable donations. If you sign up for your own account, use my special promo code “ESTARLA1” and automatically get 2,000 points credited to your profile - birthday party or not. You actually get points even for just visiting the site and inviting friends via Twitter and Facebook - so the system rewards you for your loyalty, or OCD, whichever you prefer. If nothing else, claim your free game and shoe rental at Lucky Strike Hollywood. I’d encourage weeknight visits if you’re local to avoid the weekend crowds - it’ll make your visit that much more enjoyable. They have a full bar available with a menu of bar bites (you get a ton of fries in that fry basket).