Bourbon & Burgers With the Star 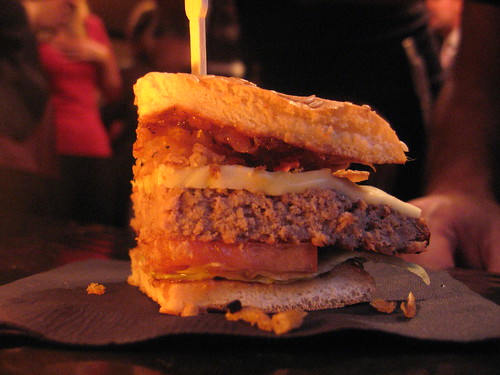 It was at Crown Bar in West Hollywood where the next Carl’s Jr. burger would be unveiled. And what better place than a whiskey bar to hold an event called, “Bourbon & Burgers?” And bourbon and burgers we would get - almost necessarily in that order!

So upon arrival - after meeting up with Sarah of TheDeliciousLife and meeting Brooks Bayne and Joe Said for the first time - I got right down to business. We were already situated by the bar so I decided to give the “signature drink” a whirl. After all, it was the drink that was created especially for that night. Truth be told, I couldn’t really figure out what was going on with the drink, as I tasted mostly soda. No matter - I saved the rest of the night for either requesting more bourbon or ordering bourbon on the rocks.

Just before Caroline on Crack arrived (yay) and meeting Food Marathon, I also ran into an old girlfriend from the glory days of undergrad. What a small world. With fast finger foods to entertain us.Â  Kentucky Bourbon Burgers - many of them - were quartered and toothpicked for our dainty consumption. And they pretty much lived up to the task too because I found myself probably eating a full burger by the end of the night. That’s not counting the onion rings and fries I nibbled on throughout, either. For some reason, I just couldn’t stop!

Of course, how special could a burger being introduced in this day and age be without bacon? And the burger didn’t disappoint. It provided a nice texture and a good salty taste to contrast the sweet bourbon sauce on the patty. The burger itself had even a little smoky taste to it. If you like sweet-sauced burgers, the Kentucky Bourbon Burger is your sure bet. 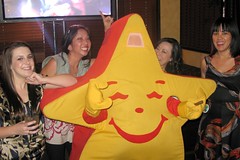 Picture credit to Caroline on Crack

As for the festivities of the night, who would complain about open bar? We also got to meet CEO Andy Puzder and the Happy Star up close and personal. A couple Laker girls were on hand and Rob Dyrdek made an appearance. For good measure, we were shown current and up-and-coming Carl’s Jr. television spots. My favorite was a Jackass-type skateboarding video with Happy Star. As for guys being the target market - I admit, for running a past campaign showcasing P. Hilton in an Ashley Paige while washing a Bentley (you know which one) - they had a lot to live up to. But I think they did a pretty good job going forward with that guy appeal thing…