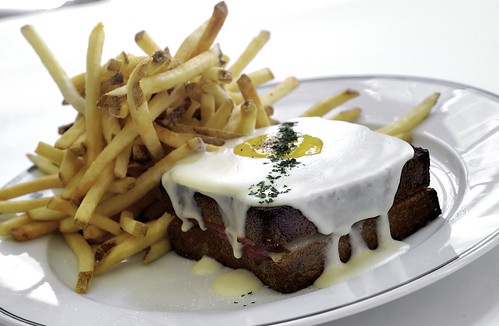 [/caption] Add Bouchon Los Angeles to Yountville and Las Vegas, and then add Bouchon to The French Laundry, Per Se, Ad Hoc and Bouchon Bakery. This is Thomas Keller up front and right here in our city and on CaÃ±on. And it’s about time, Chef: â€œI am very excited to open Bouchon in Beverly Hills. I was born in Southern California and worked in LA for many years. It feels good to be back home.â€ And we are glad to have you “back.” Opening day is Wednesday, November 18 - when the curtains open on the fruits of labor by a meticulously crafted team headed by Chef de Cuisine Rory Herrmann (Per Se). GM Greg Rowen is formerly of Jardiniere (also GM) and Four Seasons San Francisco (Restaurant and Bar Manager). Pastry Chef Scott Wheatfill, Head Sommelier Alex Weil and 23 others fill out the Bouchon team. As for the menu, expect bistro classics like Roast Chicken, Leg of Lamb, Quiche Lorraine and Trout Amandine. And of course - a raw bar featuring east and west coast oysters on the half-shell. On the other tiers will be cold poached Maine lobster, sweet gulf white shrimp, tiny Bouchot mussels, littleneck clams and Dungeness crab. The wine list at Bouchon Beverly Hills location will focus on winemakers on the Central Coast of California. The program, entitled Vin de Carafe, will periodically feature an exclusive selection, blended specially for the restaurant one barrel at a time to showcase the distinct personality and flavors of the featured vintner. At opening, Bouchon will unveil its own pilsner-style beer called White Apron, crafted by James Hayes. Bar Bouchon, which opens in Mid-December, will be a classic French wine bar with an indoor and outdoor terrace and a capacity for 46 guests. Small plates will compliment an extensive wine and beer list. Expect potted foods, salads, charcuterie, cheeses, tartines, sandwiches, caviar and desserts.Â  “Escargots Bourguignonnes and Tarte FlambÃ© will be featured alongside seasonal dishes including Macaroni au Truffes (macaroni with black truffles) and Courage (winter squash with red currents, sage and beurre noisette)” notes the press release. Divine.

Adam Tihiny recreates the atmosphere of Bouchons past - but do check EaterLA for first photos of Bouchon. Check below for hours and to make your reservation. Do it now - because for certain they are probably into the first few weeks of opening. I am super excited to be a part of a reservation on opening day! (Thank you Chad and Jer!) And by the way - they are open until pretty late at night! I can’t wait until I can just drop in. All the time.

While you’re there, just shake in your boots at the technology to come and yet you may never see:

“We’re going to have a video feed between all three Bouchons–Bouchon Yountville, Bouchon Las Vegas and Bouchon Beverly Hills. Three-way. By early summer it will be all five-way. So each restaurant can view the other restaurants. Only the kitchens.”

Make a reservation on OpenTable 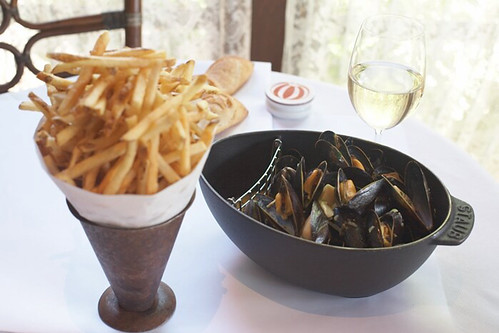