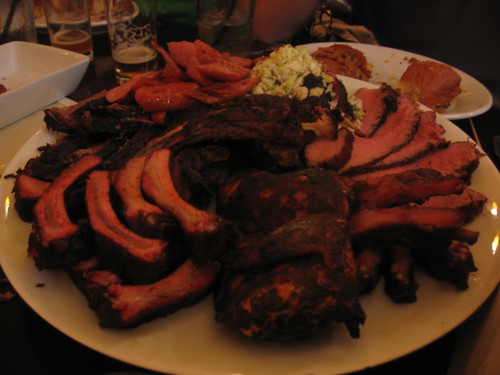 First, it was a review on a South Bay establishment and today, we have one in The Valley. Sherman Oaks, that is. As they say, it’s good to stretch yourself. Expand one’s own boundaries. And what a great place for BBQ, at that. I would make the drive - after all, it’s always better to take a Canyon road than mess with the freeways - at least where I’m coming from.

I accompanied fellow food bloggers Mattatouille, FoodGPS and John of SocialDomain in the quest for BBQ. It was a Monday, and all brews are 1⁄2-off. This is a splendid place to enjoy such price discount because Boneyard Bistro’s brew list is quite impressive - 120 to date, and from what it sounds like the list has just kept expanding with no signs of stopping. But more about the brews later. 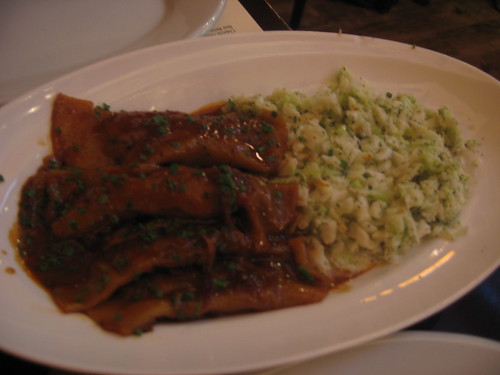 As for the appetizers, Aaron, the gracious executive chef and co-owner, sent out platters of what he thought we should try. Note that there was no mention of “bites” - as portions are aplenty.Â  There’s an appetizer selection for whatever suits your fancy but the pick of the night was the pulled pork dumplings, complete with a side of surprisingly good coleslaw.

Now to align themselves with the on-going macaroni & cheese craze, Boneyard decided to shape their mac & cheese into that of a grilled cheese sammich, bread then fry. While I can’t really argue with mac & cheese so long as a good cheese is used and the macaroni wasn’t cooked too long (yes, these “sammiches” were tasty), I thought it unnecessary to add more “girth” to my mac & cheese. This isn’t to say that I can’t see why this appetizer is a hit, however. It’s fried. Because if you’re not eating BBQ, you’re eating something battered and greased. 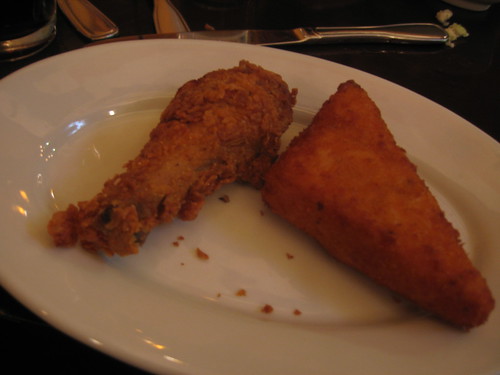 However, the fried chicken. I really enjoyed it and was especially impressed with how juicy the center was while the outermost layer was not only crispy, but fluffy. And I’ll be honest, here - I’m a dark meat kinda gal so if you want an opinion on how the breast was, you’ll just have to get the opinion of another food blogger.

The smoked meats were delicious, particularly the pork ribs. And maybe it was just a fluke and I’m a sucker for pork because I really enjoyed the pork sausage as well. The smoked flavor really permeated the entire link. It was ever-apparent that the smoker is indeed in the back and our meats had just emerged from it. The beef ribs were also respectable but for full disclosure purposes I have always been partial to pork.

If you are really serious about BBQ and have perhaps expressed frustration at the selection in Los Angeles, Boneyard Bistro would be worth a trip to the valley. Also, if you are even half-serious about brews it is definitely worth the peep - especially with the entire list being 1⁄2-off on Mondays. We tried the ol’ dogs: Road Dog, Hair Dog and Brew Dog Paradox, which is aged in 1970 Glen Grant Scotch casks. The real treat at the end of our meal was the Thomas Hardy Ale - which not a short time ago wasn’t available Stateside. Legally.

And don’t worry - whatever brew you fancy - Boneyard has you covered. We went in the back to check: 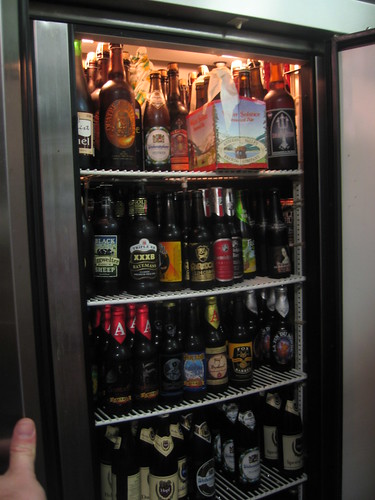 Just don’t forget to finish off with their flourless chocolate cake. Infused in it was Jack Daniels and Coca Cola for a twist on your standard chocolate dessert.