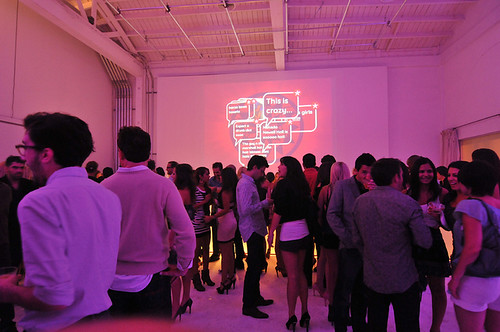 [/caption] There’s something to be said of Steve Jobs’ hatred of buttons by BlackBerry users. All I know is, there’s no app for the alleviation of frustration caused by a 100% visually dependent phone. Nor is there an iPhone app (or my iPod Touch, for that matter) that provides the tactile experience which enables me to type anywhere near my 115 WPM laptop keyboard rate. [caption id=“” align=“alignright” width=“240” caption=“Ordering a drink via BBM”] 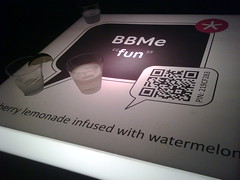 [/caption] Enough with the geek talk. Because BlackBerry has thankfully become local to me since Xomad, who holds these events, pitched me a couple weeks ago on an exclusive party at a location not to be known until the night of (or in my case, a couple of days prior). VIP entry? Sure, I thought. Let’s give it a shot. I relished the invite since it was specified that perks would be available by adding contacts by scanning bar codes or adding PINs…iPhone users need not apply. It ended up being at Siren Studios, another studio lot in Hollywood, and I was sent via BlackBerry Messenger an image to show to the valet for comped parking. We walked up to and stood for a few minutes in the “VIP” line, but after a few minutes I found my PR contact and we were escorted inside in high style…unbeknownst to me until later, along with LA Snark. [caption id=“” align=“alignleft” width=“240” caption=“BBM Lounge and Dance Floor | Â© Xomad”] 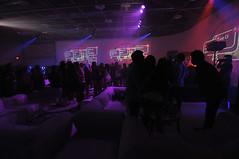 [/caption] Nevermind that the drinks I ordered by adding a contact with screen name “Beverage Services” never came to our table - and that it was easier to go straight up to the 1-deep open bar for our libations - the concept was still cool. As VIP, we also had access to the green room where there was another bar and gift bags filled with BlackBerry headphones, T-shirts and holsters. And so maybe I didn’t order any carne asada (just came from dinner) or get a touch-up on my make-up (I had just applied) but all the same, those options plus a VIP bathroom were available via BBM - thus making us BlackBerry users feel pretty special. The beats were also bumpin’ and bootys got down; it was Hollywood’s clubbiest at the clubby-club-club. [caption id=“” align=“alignright” width=“240” caption=“Requesting a Touch-up via BBM | Â© Xomad”] 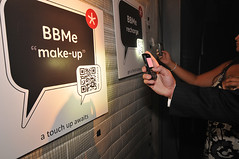 [/caption] And it wouldn’t be a Hollywood party without the unexpected celebrities dropping by…and my failure to recognize any of them.Â Apparently Spice Girl MelÂ B, Quinton Aaron (Blind Side) were there - as were both Mark Salling (Glee) and Vienna Girardi (The Bachelor), despite his adamance on their not being together. What say ye? (Don’t ask me - I’ve never seen the Spice Girls Movie, The Blind Side, Glee or The Bachelor!) The best part of it all is that this was just the kick-off as far as BlackBerry parties in L.A. (and beyond). Stay tuned for another event which will take place in September, where you guys - my readers - will also get VIP entry. I’ll also be hosting a BlackBerry-related giveaway. And don’t worry, even if you have an iPhone, you’ll still get to enjoy open bar.