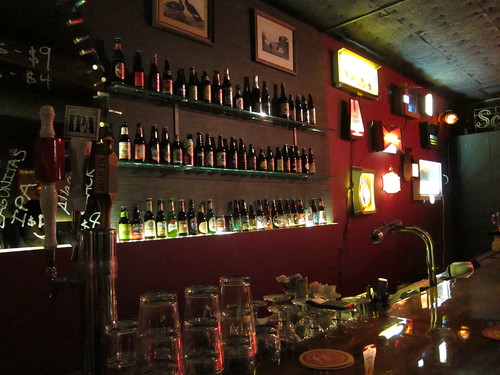 I’m a big fan of neighborhood bars - and a bar with a good vibe and beer selection is indeed a rare scene to find. Lo and behold, the people behind Bar Covell have occupied the adjacent space to Rambutan Thai and set up shop, offering 5 taps and over 50 bottles of brews. 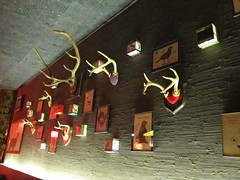 Set at the scene of Silver Lake and Sunset boulevards, it’s a hop and a skip from Silverlake Lounge and Spaceland The Satellite - only two of the hottest places to see live music, making it a convenient place to come for a pre- or post-show beer…or five.

The list offers great Californias brews like Alesmith Speedway Stout, Anderson Valley Oatmeal Stout and Russian River Valley Damnation - but if you choose to go European, they have plenty of that, too, with pours costing between $5-9 each. At the time of my visit, Lagunitas IPA, Urthel Hop-It, Oskar Blues Ten Fidy, TAPS Barleywine and Allagash Black were all on tap. (Yum - especially the Urthel. A surprisingly well-balanced, hoppy blonde.) 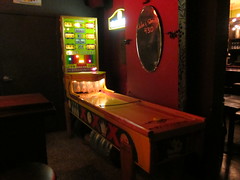 They’ve also got a shuffleboard-air hockey-bowling type machine (don’t ask me, I never played it) if you feel like a game-of-something with your mates. Or just enjoy the perfectly-lit space and gaze at the upside-down canoe hanging from the ceiling. The ambiance is made in large part by the vintage neon signs hanging along the walls - a contribution by Joe Keeper, keeping the goods in the Silver Lake family.

Since opening a couple weeks ago, Beer Bar has also invoked their small menu of fried chicken and sides, prepared in the fryers of Rambutan, and only costing you $9 for a serving with two sides and $4 for fries. I’m jonesin’ to try the fried okra. Arrived after 10 PM on a weekday or 11 PM on a weekend (that is, after the kitchen’s closed)? Look no further than Hipster Pho, which neighbors Beer Bar and is actually an unmarked (thus the hipster) Thai place called Pho Cafe. Beer Bar generously lends its space to carry-in food, and even had the wares for me to eat my bowl of beef broth and rice noodles right at the bar. Ask the beer dude behind the counter to pairÂ your foodÂ (pho or chicken - either way)Â with a beer of his choosing, and you’re set.