Beyond Celebrity Sushi Rolls: Omakase at Hamasaku is Top Notch 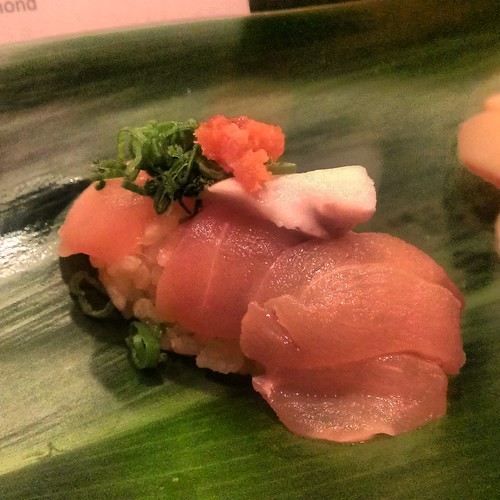 Kuromutsu Sushi Topped with Shirako[/caption] Hamasaku is a Westside strip-mall sushi joint, its designation as such not lost on the many regulars who have gone for a particular sushi experience for a number of years. There’s a menu full of celebrity rolls - that is, name-saken sushi rolls with ingredient combinations made up by celebrities - and it is this menu on which Hamasaku has built its reputation. Until recently, that is. Now, you’ll have to specially ask for the celebrity roll menu should you want to order off it. [caption id=“” align=“alignright” width=“240”] 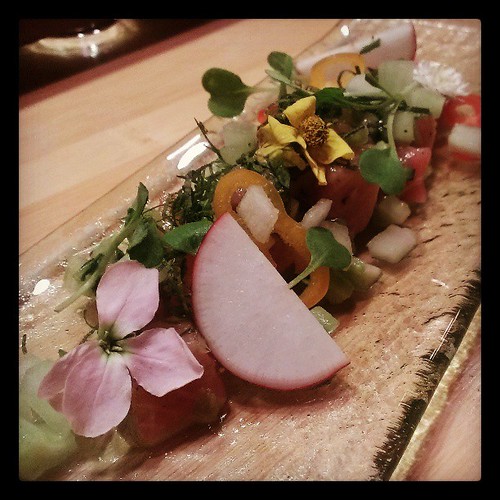 Toro and Wasabi Salsa Salad[/caption] Twelve years after its inception, we come to 2013, when Krazy Kombination Rolls finally betray a preference for softball sushi in an age increasingly obsessed with authenticity - or, at least the veneer of an elevated palate. Hamasaku has stepped it up. At the forefront, now, is the omakase, as Hamasaku hopes to attract a clientele that is curious, even fearless. Thanks to the great execution by Head Chef Yoya Takahashi and Executive Chef Wonny Lee, it looks like Hamasaku is well on its way in this transition, rewarding customers with mind-bending ingredients, tastes and textures. Thankfully, I can’t tell you what you’ll be served when you select the $100 per person tasting since the selection is all seasonal, but I can say it will be a delicious experience peppered with delicacies. Chef Lee has worked in kitchens such as Marche Moderne, Hamamori, Patina Group and Bazaar by José Andrés, and his modern take on Hamasaku’s Japanese cuisine is evident through his employment of Californian ingredients. What I really enjoyed in my “chef’s choice” experience was the wide variety of dishes and tastes, almost all of which are a great departure from the typical, Americanized Japanese restaurants. Not to say that Hamasaku, for its own survival, doesn’t have a foot still in that other door. However, every dish which required it was seasoned just enough. The quality of fish was stellar, as well, which you’ll find shine through in their solid selection of nigiri. [caption id=“” align=“alignleft” width=“240”] 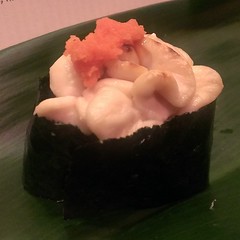 Shirako Sushi[/caption] An interesting twist on that was their Box Sushi, which is essentially a pressed kind of nigiri. The box sushi I tried had pickled cherry blossoms pressed into the center, topped with Japanese Seabass and shreads of chrysanthemum on top. Fragrant, a tad sour yet very much delicious. I also very much enjoyed a Toro salad with wasabi salsa and a beautiful array of edible flowers that was as pleasing to the eye as to my tastebuds. Risks are also being taken here, which is great. Thankfully, there wasn’t any overdoing with the flowers. Some especially savory selections - e*starLA Flickr”) included fresh monkfish liver, a tender filet of Isaki en Papillote (cooked in a bag, that is), sake-steamed conch and…Shirako. That is, cod sperm sacs. It’s a commonly requested delicacy in Japan, only in season a few months per year, and ultimately a buttery, smarmy pile of custard. What was great about this particular omakase experience was that there were no throw-aways. Everything was expertly prepared, seasonal and fresh. A good bet would be to go with a sake flight to wash it all down. The sake flight selection is stellar and a great compliment to the meal. Hamasaku is the setting for great things unexpected, with the main attraction unlikely to go hidden for much longer. For now, when you go with omakase, everyone - including the chef - will know that you’re in the know. All food and sake were hosted.