Best Bites and Swigs at The UMAMIcatessen 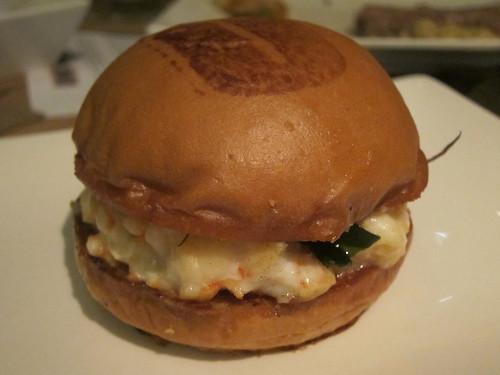 [/caption] I have had four Umami burgers in my life and I have really enjoyed only one of them, which is probably due to the fact that all four were consumed after the quick Umami Burger expansion to Santa Monica, Hollywood and so forth. Thus, I found them to be largely inconsistent. [caption id=“” align=“alignright” width=“240” caption=“UMAMIcatessen Interior”] 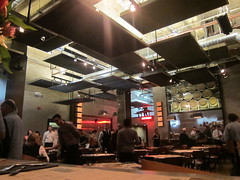 [/caption] Just last week, I passed the La Brea location and there was a line of at least 20 Yelp reviewers people waiting outside to get seated. I gave the same roll eyes that I reserve for those who drive in to my neighborhood expressly for Saturday night bottle service. But this…“catessen”…is a whole new ballgame. So nothing really prepared me for how much I enjoyed pretty much everything at Adam Fleischman’s UMAMIcatessen friends and family nightÂ in Downtown LA.Â And is the theatre revival on Broadway ever thankful for this pre-performance dining spot, which is basically a 7,000 square foot bazaar furnished with repurposed furniture in the 1929 Art Deco Ninth and Broadway Building. Down the street at a later date we can welcome Two Boots Pizza, Ace Hotel and Clifton’s Cafeteria reopening. The Cure (read: Kosher “style”), Umami Burger, P!GG, Spring for Coffee selections, & a Donut and of course, the fabulousÂ Back Bar all offered tasty treats and swillerific swigs. Top notch. [caption id=“” align=“alignleft” width=“240” caption=“Wasabi Potato Salad with Sashimi”] 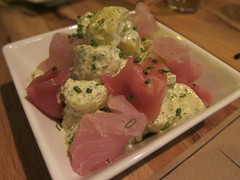 [/caption] The best bite of the night was the just-unveiled-that-night Shrimp Burger with Yuzu-Kosho, which embodied that namesake fifth taste in every way. No soggy lettuce, mind you,Â sat between the buttery, airy bunsÂ but a bit of seaweed in keeping with that shrimp bite.Â It also packs a delicious,Â slight kick thanks to the yuzu-kosho. Also exclusive to this location was the ever delicious Wasabi Potato Salad topped with Sashimi. It’s ingenius and probably the most refreshing taters you’ll ever have, but I’d be lying if the sashimi isn’t the easiest thing to pick off the appetizer, with my somewhat guiltfully leaving some lonely spuds behind. [caption id=“” align=“alignright” width=“240” caption=“Chris Cosentino and a can of lardo”] 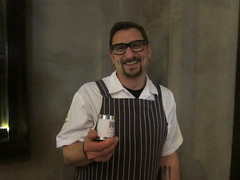 [/caption] But let me backtrack, here. It can’t be overlooked that P!GG isÂ aÂ welcoming of Chris Cosentino, of San Franciscan fame,Â into the Los Angeles foray.Â Don’t forget the Pork in a Can Lardo on crostini nor the Cone O’ Cracklins, the latter of which were delightfullyÂ airier than I expected. The Country Pate with cornichons and green peppercorn was pork-solid, as well, and delicious. And don’t forget the “Brainnaise” (whole hog is key), which comes atop P!GG Style Fries. But at the center of the P!GG menu are curedÂ selections from Spain, Italy and the U.S. The Mini Potato Knishes from The Cure were also little bits of pastry heaven. The Matzoh Ball Soup is not to be overlooked, either, since there are crunchy little chicken cracklins dispersed amongst the matzoh. The Corned Beef and Pastrami assessment will have to come at a later date. [caption id=“” align=“alignleft” width=“240” caption=“9th and Broad Cocktail”] 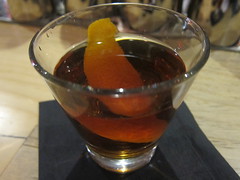 [/caption] And I would be negligent if I didn’t address the delicious cocktails helmed by Adrian Bigg. My favorite was the 9th and Broad, made with Woodford Reserve bourbon, Carpano Antica formula, Apricot liqueur and Jerry Thomas decanter bitters. The essential drink, of course, is the Bourbon Pig, essentially bacon fat washed Bulleit with Angostura, sugar and pig ear garnish. As for gin lovers, I loved the Red Sapphire, made with Bombay Sapphire gin, St. Vincent raspberry syrup, Earl Grey tea syrup, Maraschino, fresh lemon juice and egg white. Don’t judge a cocktail by its cover, as this was a, yes - light, but perfectly balanced cocktail despiteÂ the temptation to dismiss it as aÂ girly drink. So tasty. [caption id=“” align=“alignright” width=“240” caption=”& a Donut”] 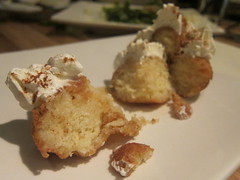 [/caption] Feeling more like beer? Ten draft beers are available for your pleasure. And the Spring for Coffee was a perfect, mid-meal pick-me-up. Now that is really good coffee. And don’t forget dessert. The beignets were delightful as was the perfectly moist, rich donut. So get yourself down to the UMAMIcatessen. Your appetite for whole hog, burgers, cocktails and all the extra fixins demands it. It’s really not just about burgers, anymore, and at once worthy of all the hype that surrounds Umami. All food and drink were hosted.