Being Roused By Bon Iver at Hollywood Forever 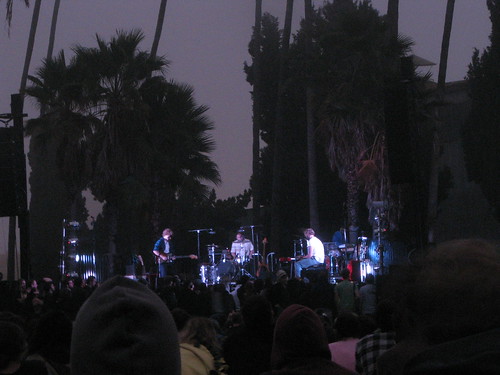 It’s always the people from out of town who think it’s weird there are movie screenings in a cemetery. Oh you know, those L.A. hippy folk are always up to their crazy ways, up to no good. On the other hand, if you’ve been here awhile, it’s old news or - even if it actually weren’t - you had heard about the screenings and that they were really cool so you just acted like it was old news the only way hipsters in skinny jeans could. Oh yeah, been there - done that. I myself had the Hollywood Forever routine down. I brought my layers of blankets and sleeping bags, my food and wine - ready to lay down on a damp lawn. In true fashion, we even lined up in between velvet wood stakes and plastic tape to get in. Mozza 2 Go in tow (mortadella sandwich, burrata pizza specialÂ and butterscotch budino, thankyouverymuch)Â we set up in the same area and pretty much in the same manner as for a screening. The 1 AM arrival time, however, was a deviation. And instead of preparing to feast or snack, all entrants prepared for slumber. People set up little kumbaya circles with tea lights in the center while we crawled inside our sleeping bags and zipped up, separating ourselves from the lawn and the mist. I never got to have sleepovers like this when I was a kid. I believe it was then when I was scared of cemeteries. We’re all grown-up now. And what happens at grown-up sleepovers, apparently, is screenings ofÂ one Wes Andersen movie andÂ one documentary (Bottle Rocket and Planet Earth) with the sound turned down a notch. DJ sets by Bon Iver came between the movies and aÂ night-long coffee bar was available a few yards away. Apparently, there are still face paintings at grown-up sleepovers. But probably the most remarkable thing that happens at grown-up sleepovers is waking in said cemetery to the chants of Buddhist monks. Since generally cranky when waking from naps, I was halfway between thinkingÂ that spirit-filled monotoneÂ was the coolest thing in the world to wanting them to shut up. I sat up a bit, groggy, and finally noticed there was a stage set up to the right of the Masonic Lodge. And then I saw a spotlight upon four dudes in the dark before the dawn -Â their complexions only fellow Wisconsinites could understand. The red-tinged hair, beards and Justin Vernon’s sweet, quaint and perfectly harmonized voice carried through the fog so serenely over subtle syncopations - nowhere else, no other time in Hollywood would I ever feel the simple beauty of the woods of Wisconsin ever again. I held on.

In between remarks of how much more of us we he could see out there as it turned daylight through fog and requests for reassurances that we were all doing all right, Justin Vernon confessed, “This has got to be the weirdest things any of us have ever done - ever.” “Weird” wouldn’t have been my descriptor. I would’ve used generic ones like “cool” and “awesome” - after all, I’m an Angeleno now. 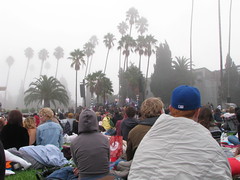 This was some “amazing” singing happening at 6 in the morning. I commend the sound guys for really facilitating Bon Iver’s beautiful sound to the outdoor audience so well. My disbelief the event wasn’t sold out two weeks after tickets went on saleÂ during my pre-event write-up was now validated.Â The blessing the Buddhist monks did pre-performance really did work. There was something gorgeously haunting hanging in the air through each song. Daylight was ushered in, even orchestrated by the band. The setlist was perfectly timed so, each song ready to carry us through a stage of rousal. When friends and tourmates of Bon Iver, Megafaun (more beards, more red hair and milky complexion), performed with ever-beautiful harmonization, similarly simple melody accompanied by the twang of a banjo, it completed the feeling of being back home again. My senses were given a little comic relief with a bright blue throw-back Brewers cap in my view. It would’ve irritated me more if it hadn’t reminded of a time I was elated to get Cecil Cooper’s baseball card (it wasn’t even a rookie). By now - so moved -Â I had wiped tears from the corners of my eyes a few times. They rang out the performance with The Wolves (Act I and II). The beats were at their heaviest, yet, and though we may tryÂ comply with Vernon (and Megafaun before him) by singing along , an appreciative grogginess permeated an audience just thankful to be on that lawn. Nevertheless, some pow-wow’ed up close to the stage alongÂ with the beats, determined to be here right now.