Behind the Scenes Look at LA Opera's Production of Falstaff 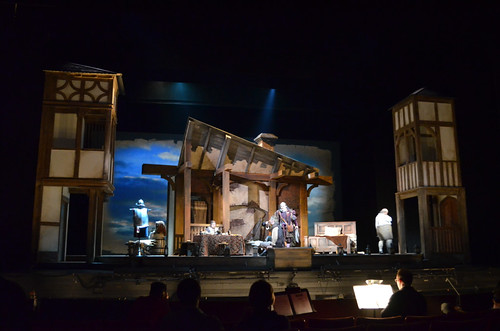 Falstaff Rehearsal, James Conlon, Maestro[/caption] Just three more performances of Falstaff at the Dorothy Chandler Pavilion remain this year, and if you haven’t seen the brand new production, this is your last chance. A few days before its opening, I got a chance to go backstage with other media and see the staging, a bit of rehearsal and results of all the effort that goes into the food in the comic opera, which was also Verdi’s last. Yes, the food. A whole turkey is prepared for every single performance of Falstaff - Act II, Scene 1, to be exact - requiring 5 hours of preparation that precede it. Mistress Quickly, played by Ronnita Nicole Miller, also has to deal with taking a bite of a big turkey leg immediately before singing verse. [caption id=“” align=“alignright” width=“240”] 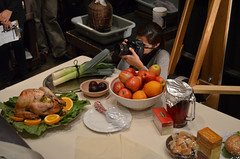 Turkey and other food backstage[/caption] Other food recreated in the midst of Falstaff’s gluttony is Parkin, a molassses cake, and Marché Pain - both desserts dating back to Elizabethan times - though you probably wouldn’t be able to recognize them from your seat. Which alludes to the detail to which each aspect of the production is taken to illustrate Falstaff’s opulence. But the performers’ passion for food goes beyond eating the leftovers from the spoils of each production. Carmen Giannttasio, who plays Alice Ford, has actually written a food blog while in Italy. And in a way, it’s some kind of crazy full circle for me, personally. I now write about food, and it’s the reason why I was invited backstage - but I’ve also played Violin I in the pit orchestra for a UCLA production of Falstaff during my undergraduate years. It was probably the most enjoyable pit orchestra experience in my amateur career as a violinist. If you don’t go because of your obsession of food, go because of the orchestration and the actual opera; it’s one of Verdi’s most beautiful operatic works.