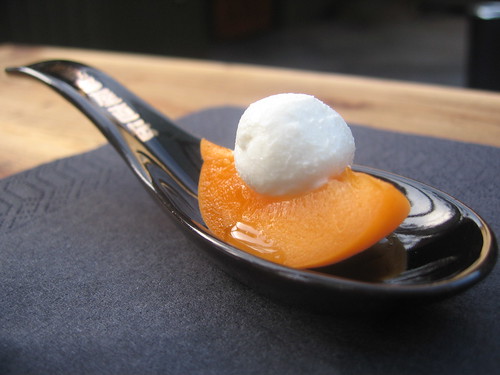 Are you kidding me?! I’m from Wisconsin. When I was told that I would drink beer specifically matched to a cheese counterpart - six times - there was no hesitation. I could feel the accent come back. My short O’s opened up and my A’s knocked back. I was ready to taste the high life up in this grille again, twice over. But in Echo Park. And there would be no bratwurst served. And we would not be tailgating.

Just the beer and just the cheese, packaged in tasty little bites.

I met up with H.C. of LA OC Foodie for the Citysearch-hosted tasting and we were eventually joined by Tony of Sinosoul as well as his better half. Food was provided by Alex and Evan ofÂ Hot Knives, whom I thought did an excellent job not just pairing the beers up but just providing unexpected food. (I guess they should know cheese pretty well if they’ve won the Grilled Cheese Invitational 5 separate times.)

I became giddy at the slices of apricots topped with chevre (goat cheese) placed at our settings even before we sat down. Dogfish Head’s Festina PÃªche - a sour brew made with fresh peaches - comes from Delaware and was great with the light cheese and subtly sweet apricot. A nice start to the tasting.

Next came out a gazpacho blanco with CaÃ±a de Oveja - a sheep’s milk cheese from Spain - over crostini. The great thing about it was the pairing was made with Eagle Rock Brewery’s Witbier - made with coriander and orange peel - and which is Eagle Rock Brewery’s first beer. The debut of an East LA brewery was happening amongst us! By chance, I was also sitting next to its co-owner Jeremy Raub and so had many congratulations to give him as I really enjoyed the beer, which was really refreshing. 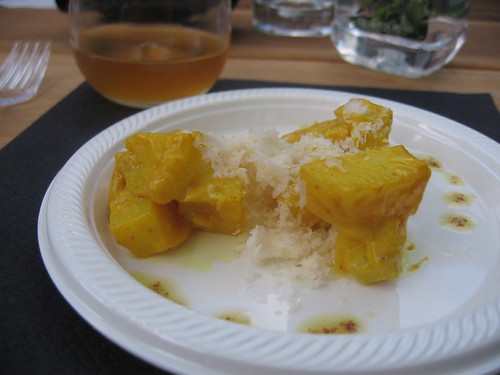 Next up was a Brooklyn/Schneider Hopfen Weisse served with mustardy potatoes with tumeric and Fiscalini cheddar. This was an especially diverse pairing that blew my mind when hearing of the origins. I like hoppy beers so the Hopfen Weisse (made with American hops) was straight up my alley. But the mustardy potatoes were also my favorite eats of the tasting and brought out the honeys in the Hopfen Weisse - and what with a Peruvian, award-winning cheddar made in Modesto, CA of all places? It was probably the tastiest cheddar I’ve ever experienced in recent memory. I must get myself some! 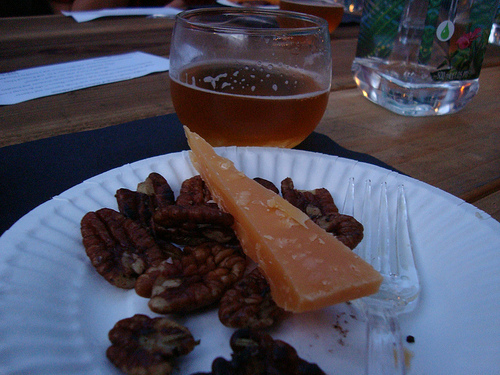 Allagash’s Victor was next - a welcome white. I always love a good caprese salad (who doesn’t?) but this one had a spin in it in that the mozzarella was aged. Pliny the Elder with Beemster X.O. (above)Â â€“ a gouda â€“ with pecans roasted in rosemary and topped with truffle salt felt like what would have been the meat dish in a 4-course meal. I loved the Beemster. Tangy, smoked gouda goodness. And I was ready for an American double IPA like Pliny by now â€“ yes, even me. The most curious pairing but perfect for dessert was Alesmithâ€™s Speedway Stout with blue cheese and a chocolate chip cookie topped with smoky salt. Alesmith, one of the top 10 stouts around, was so rich and delicious. It reminded me of coffee, chocolate, even cocoa nibs. I admit that I needed to taste the bleu cheese pairing with the cookie to believe it â€“ but indeed the smoky salt Â went with the potent cheese quite nicely. This was one of my favorite tastings to date - perhaps because I always have eaten and really enjoyed cheese all my lifeÂ and lately I have been appreciating beer a lot more.Â  …And now it’s time to track some Beemster X.O. and Fiscalini cheddar down! P.S. - Definitely check out Verdugo Bar. Great list, divvy digsÂ - it’s no coincidence.