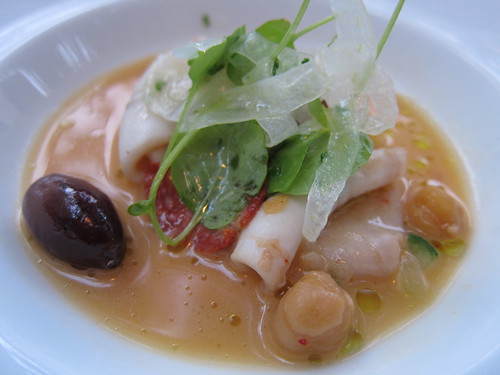 [/caption] Welcome to the real Melrose Place. Aaron Spelling is nowhere to be found, and sure, Area - an SBE nightclub - is just a block away, but you’d never have guessed it from inside Bastide’s enclosed, quaint and olive tree and garden lined patio. In fact, dining at Bastide is somewhat like dining at someone’s artistically appointed home, complete with a top personal chef. If it really were someone’s home, you’d leave the dinner party while vowing to get that raise so you could buy the house with the patio that everyone else would envy. [caption id=“” align=“alignright” width=“240” caption=“Outdoor patio”] 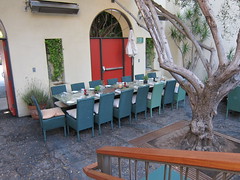 [/caption] You can come to Bastide early on a Monday for their $15, 5 - 7 PM special, when you’ll get to enjoy the patio over passed bites that are perfectly executed. Their yellowtail tartare is refreshing, the pork rillettes topped with cashews and pickled cherry are savory and their corn soup has a surprising twist thanks to curry oil. But since I’m prejudiced against all soju martinis, their wine or bubbly will accompany my bites just fine, thanks. I also enjoyed all the wine pairings that came with each course at dinner. Dario Dell’anno, who doubles as the manager and sommelier of Bastide, has a nice touch. [caption id=“” align=“alignleft” width=“240” caption=“Watermelon Salad | Fried Chicken, Tomato, Feta, Mache, Aged Sherry Emulsion”] 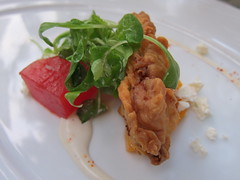 [/caption] When we sat down for our meal at our table, which was appointed not with just salt and pepper, but with Fleur de Sel de Guerande and a peppercorn grinder, I found the house-made butter that accompanied our warm bread so indulgent and yet so light. It was practically gone before our first dish came. The watermelon salad with fried chicken was ever season-appropriate with its tomato, feta, mache and aged sherry emulsion. I never considered fried chicken to be a starter, but here it was. It was paired with a delicious 2008 Ã‰ric Texier Condrieu OpÃ¢le, which was refreshing with melon notes that went perfectly with our first few entrees. [caption id=“” align=“alignright” width=“240” caption=“Tomato Risotto | Artichoke, Herb Salad, Goat Cheese”] 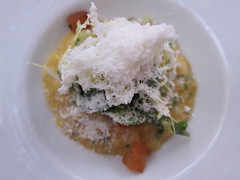 [/caption] Next was the squid with chickpeas, cucumber, chorizo and fennel which was very impressive. The squid was expertly cooked, and I actually found myself describing the cepholopod as “tender.” The fennel was a perfect aromatic accompaniment, with the chickpeas and chorizo butter giving it a savory kick. The 2007 Domaine Alfred Chardonnay from Chamisal Vineyards, with its oak notes, was also a beautiful pairing with the squid and the following risotto. The Tomato Risotto was beautiful as it was delicious. Risotto is one of those dishes that evolve the more you savor, and I appreciated that the risotto was of the essence and wasn’t a predictible orange color. Rather, just a couple of cherry heirlooms lay in the yellow-tinged dish and further, a generous cut of artichoke awaited in the center. The herb salad that lay atop a great job lightening things up while the shavings of goat cheese elegantly brought the entire plate together. [caption id=“” align=“alignleft” width=“240” caption=“Salmon | Beluga Lentils, Snap Peas, Port Wine Sauce”] 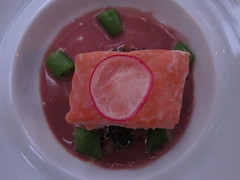 [/caption] Next was the salmon, prepared sous vide then poached with olive oil. It was plated with beluga Lentils, snap peas and port wine sauce - which was no less impressive. Truth be told, I love snap peas - but it was a perfect, refreshing and crispy green to have paired with such a fatty fish like salmon. The lentils that soaked up the port wine sauce were great for the dish’s texture while providing good weight. The radish slice was also a nice touch - I love that “crisp” factor in a fish dish like this. The 2001 Joseph Sabon ChÃ¢teauneuf-du-Pape was paired with the salmon - the leathery notes of which I thought matched the lentils and port wine sauce very well. [caption id=“” align=“aligncenter” width=“500” caption=“Lamb | Carrot Puree Olive, Grilled Zucchini, Natural Jus”] 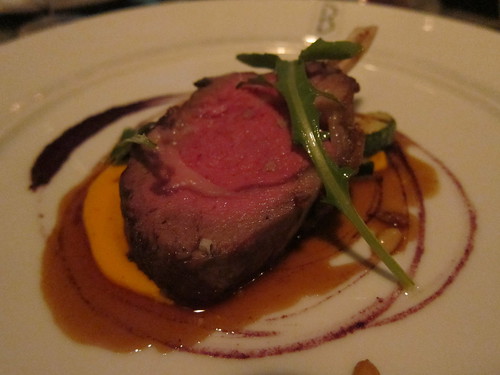 [/caption] I might as well admit here that I didn’t have just one favorite but probably three or four. But don’t ask me to choose. The lamb chop was incredibly cooked with its medium rare, pink center, a ton of flavor and none of the gamey aftertaste. The accompaniments, for once, were traditional but if only because the integrity of the lamb piece was impeccable. It was served with its own jus, which surrounded it on the plate, and helped accentuate its simplicity. Well done (no, not well). The 2004 Michaud Syrah “The Pinnacles” it was paired with comes from the central coast. This was a slightly sweeter wine than the others we had with berry notes that fit well with our lamb. [caption id=“” align=“alignright” width=“240” caption=“Garden room with hanging Campbell’s Soup cans”] 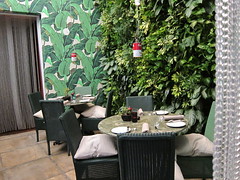 [/caption] The tasting experience at Bastide was one of my most enjoyable nights in recent memory. The service and pacing (though admittedly unfair to judge in a media setting) was en pointe and I would hope that this translates to a typical experience at Bastide, especially at $21 - $36 per entree. But the dining rooms, including a book store/library, and atmosphere are unlike any other in West Hollywood (Be sure to click through the aforementioned links for the full pictorial). As for the food: The expertly executed menu shows Chef Joseph Mahon he is imaginative while entirely capable of the traditional. All food and wine were hosted.