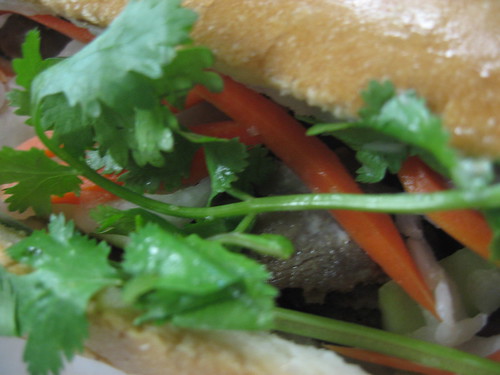 The pork is in there

Like Pat over at Eating LA, I also tried the Nom Nom Truck. I’m fortunate enough to work not too far from where food trucks get cited park at Miracle Mile at Mid-Wilshire. Fortunately, I found The Noms practicing their business in peace and relatively un-harrassed for the day. I was pleased, too, to find the menu of Vietnamese-inspired sandwiches actually “food truck-like,” price-wise. Cheap eats on the go. Hype, Twitter-infused or not, does not account for atmosphere.

I ate my banh mi at my desk.

I love Lee’s Sandwiches (known to be dirt cheap) as much as pie but let’s be serious - a 6” Lee’s would cost more than a Wahoo’s fish taco if sold on The Westside and, well -Â I have yet to hear aboutÂ a Wahoo’s opening up in Little Saigon. So yes, Nom NomÂ bÃ¡nh mÃ¬ is not at competitiveÂ Westminster prices but it is still dirt cheap in comparison to what else is out there on Miracle Mile.

And for the most part, delicious. Unfortunately, they were out of the shrimp spring rolls at the time of my visit - so I’m eager to try those at a later time. But I went for the full deal and got a 12”Â bÃ¡nh mÃ¬ combo. MyÂ extra wasÂ a lemongrass chicken taco - very respectable - and after consulting with one of the ladies inside the truck, chose theÂ grilled pork bÃ¡nh mÃ¬. It was good and hit the spot in what would otherwise be just another ordinary “tuna sandwich day” at work. My only complaint would be that the pork cut could have been a bit choicier and moist, but for a 12” sandwich, side and soda for $7 - there really is little cause to complain. It had the essential ingredients liked daikon, pickled carrots, onions, cilantro and of course pork. If I had known (like EatingLA) you could ask for sliced jalapenos, that would’ve “upped” the sandwich a bit for me - so if you have that spicy-tooth, don’t forget. ;)

I’d recommend checking out the Nom Nom Truck at least once if it’s in your area. They’re not your run-of-the-mill sandwiches. 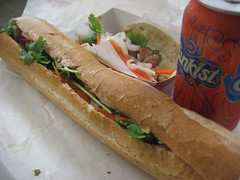 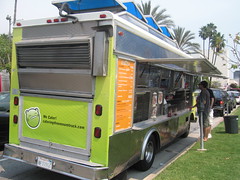