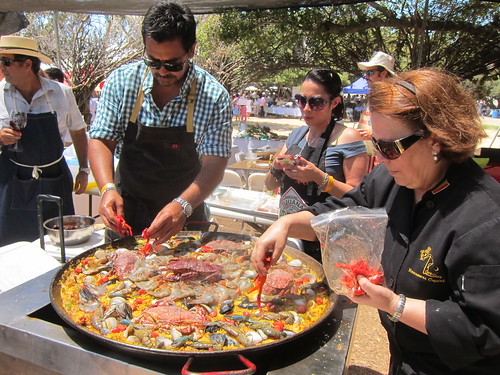 Javier Plascencia and Margarita Prieto[/caption] When one gets a last-minute, impromptu call from “reverse coyote” Bill Esparza to go down to Baja California for a sold-out paella festival in Valle de Guadelupe on a day trip, one drops everything and goes. Even if she’s supposed to be moving out of her apartment within the week. And that’s what I did. [caption id=“” align=“aligncenter” width=“500”] 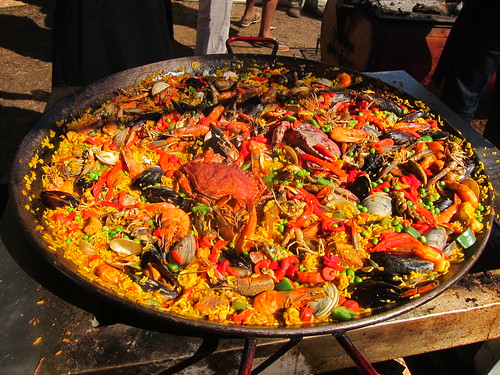 Javier and Margarita’s Paella[/caption] Bill knew from having returned from south of the border literally the day before that they were testing a new, expedited border crossing system that is set up to debut in a month. If paella from 40 different teams of chefs and caterers wasn’t incentive enough, the improved border crossing prospect was. [caption id=“” align=“alignright” width=“180”] 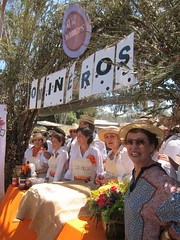 Dominero’s[/caption] And so we set off on our 3.5 hour drive south and through Mexico’s wine country to experience what was nothing short of a paella extravaganza. Huge pans of paella were “released” at different times, staggered throughout the afternoon. The most impressive pans were laden with varieties of seafood sourced from the area. Baja wineries poured Chinin Blanc, Chardonnay, Barbera, Cabernet Sauvignon, Zinfandel and more. In this heat, I opted for Rosé. It became clear from the get-go that not all paellas are created equal. I held vigil in the extra long line for multi-Paella festival winner Dominero’s to hear the spoon scraping the bottom of the pan 10 people before my turn, while I picked rice from a bowl of paella from another shop that had a hopelessly overcooked, chewy scallop. We ended up holding camp at Javier Plascencia’s stand, which enjoyed  supervision by Spaniard chef Margarita Prieto. Not one, but two rounds, of paella were cooked and served from their glorious 3-foot diameter pan. If there ever was an occasion where I’d be happy to stand in the sun, sweating profusely, while also in the crosswinds of smoke from both paella pans and BBQ spits, I had just found it. On the second round, we got to witness the sacred process of paella preparation. From creating the pork stock to adding Margarita’s secret tomato paste, adding rice and sausage, and the constant stirring and waiting before adding peppers and evenly dispersing mussels, clams, prawns and crab throughout the wide, flat pan, it was a sight to behold. That is, before the chefs finally covered the pan, sealing the paella until that celebratory time for the final product to emerge. All paella, all the time. Hopefully we’ll be back next year. (We went out for a salad on the drive back.)