Avalon of Catalina Island, CA: Highlights of a Weekend Trip 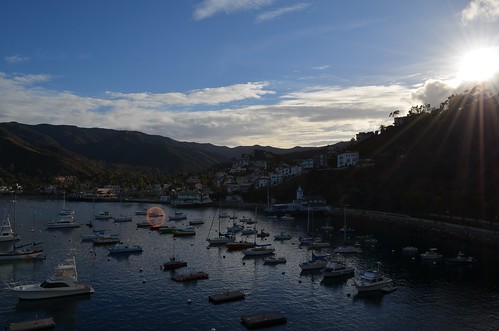 View from Casino Ballroom Balcony[/caption] Before this year, I had been to Santa Catalina Island but once for a short day trip that hardly did the 22 x 8 mile island justice. It’s easy to dismiss, with just one incorporated city named Avalon - but the trick to a successful trip here is navigating the proper spots to hit up, and when. [caption id=“” align=“aligncenter” width=“500”] 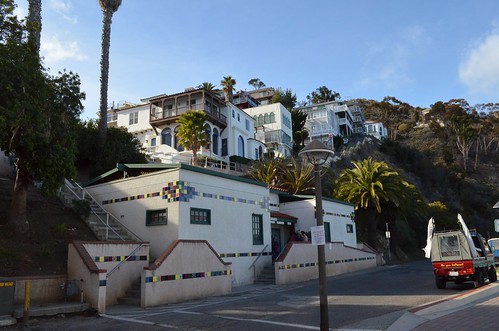 Catalina Island[/caption] There’s no questioning the beauty of the island. Peak season is the summer, of course, so if you’re crowd-averse or simply looking for a little less competition in your nearby island getaway destination, avoid July. But there are a ton of great things to do across all price ranges, and a great place to start is the exploration of the island’s Hollywood history and beautiful landscapes. First of all, the easiest way to get there is via the Catalina Express, which offers round trips from Long Beach, San Pedro and Dana Point to the island on a fairly often basis. Get the Commodore Lounge Upgrade for $15 (available only on the way there) and it comes with a free drink along with your plush seat. Make a birthday of it, bring your friends and enjoy a day of significant discounts and VIP specials. I stayed in the well appointed Hotel Metropole. It’s just off the main beat on Crescent Avenue so it was conveniently located, and I was treated to a fireplace in my room - perfect for a February stay on the island. As far as getting around on the island, there is a quota of cars that are allowed to drive around, leaving visitors and residents alike to rely mostly on golf carts for most transportation needs. To get around or simply take a drive around Avalon, you can rent a 4- or 6-person golf cart by the hour. Otherwise, everything is mostly walking distance, with a lot of the attractions on the main strip or one of its offshooting streets. [caption id=“” align=“aligncenter” width=“500”] 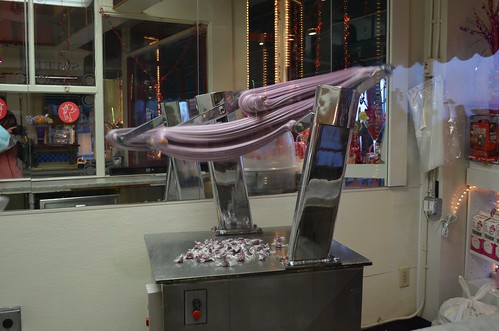 Lloyd’s of Avalon[/caption] Not far down from one of the golf cart renting centers is Lloyd’s of Avalon, a place well known now for saltwater taffy, and the store at which a married Marilyn Monroe used to work before she hit the big time. Just look for the iconic taffy pulling machine in the front window. If you’re looking to lay in the sun with a drink, the Descanso Beach Club is one of the only beaches anywhere in the U.S. with chair-and-towel-side service of food and alcoholic beverages. As you can imagine, it gets pretty busy. However, you can reserve cabanas and chaise lounges to secure your seat, and there’s a great lawn behind the beach club with an overlooking bouldering wall. [caption id=“” align=“alignright” width=“200”] 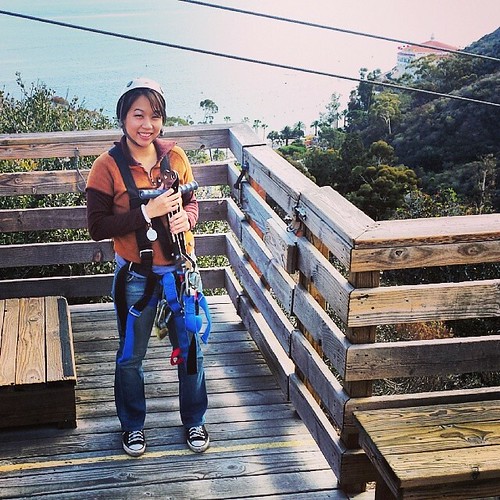 Zip Line Eco Tour[/caption] Even further in the recesses of the beach club is the Zip Line Eco Tour operation, a must-try for everyone, from the least bit adventurous all the way up to official adrenaline junkies. (Okay, if you have vertigo or are prone to any kind of motion sickness, do use discretion. I asked my guide the worst of what he’s seen, and he’s divulged some fits of crying, peed pants and vomiting.) You get a total of 5 “zips” from platform to platform and even a progressive history lesson on the island’s fowl, fauna and other habitats, which has been influenced with Hollywood production history. To learn about the island’s history, a visit to the William Wrigley, Jr.-established Catalina Island Museum will take about an hour and is well worthwhile. See rotating exhibitions featuring Old Hollywood on the island, and more. A new exhibit detailing the secret romance between Paulette Goddard and Charlie Chaplin opens tomorrow. [caption id=“” align=“aligncenter” width=“500”] 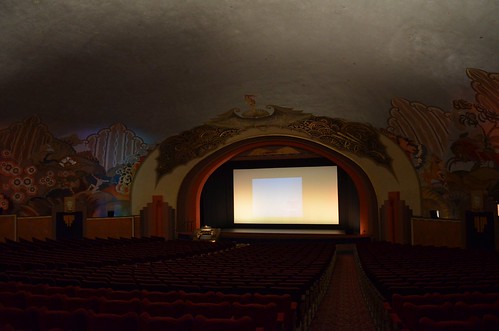 The Casino Theatre[/caption] But there is no other structure on the island that captures human history like Avalon’s Casino, an architectural award-winning building that was completed in just 15 months also by William Wrigley, Jr. from 1928-1929. On the Behind the Scenes Casino Tour, you’ll explore parts of the historic building, including the 1,100-seat, acoustically dynamic theatre (the plans were copied by Radio City Music Hall) on the first floor. Names such as Benny Goodman and Gene Autry have performed on-stage; today, a current run movie is shown nightly at 7:30. The original yet recently reupholstered furniture is still in its iconic lobby. [caption id=“” align=“aligncenter” width=“500”] 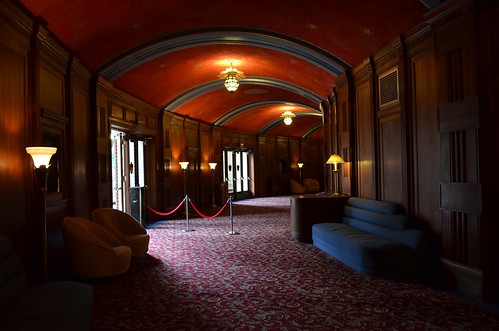 Lobby of the Casino[/caption] Upstairs is a 3,000-person ballroom that’s now used for private and public events, as a main arena for the City of Avalon. Tales of ghosts are interwoven with items and rooms from the radio in the downstairs lobby to the women’s bathroom dwellings upstairs. File the Casino tour as an essential sight-seeing stop”) while you’re in Avalon. 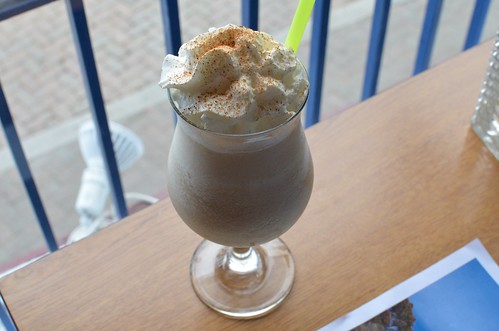 Buffalo Milk at Steve’s Steakhouse[/caption] There are also culinary musts when you visit Catalina. The island drink of note is the Buffalo Milk, a true crowd-pleaser cocktail with vodka, kahlua, creme de cacao as well as creme de banana that is available at the Tiki bar called Luau Larry’s - where you can also get Wiki Wack’ed (the keepsake hat is part of what it’s all about) - but is also available most places where you can drink and/or eat. [caption id=“” align=“aligncenter” width=“500”] 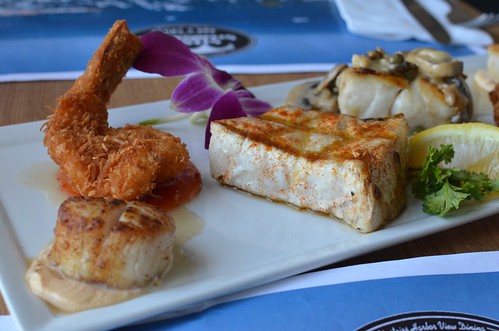 Scallop, Coconut shrimp, Seabass, Swordfish at Steve’s Steakhouse[/caption] Steve’s Steakhouse is undeniably a locals’ place to eat - and a popular one at that - especially when you consider that it’s family owned and Steve is a bona fide, 4th generation Catalina Islander. They do the island staple, Coconut Shrimp, as fluffy yet crunchy as anybody, but their New England clam chowder and fresh-caught-daily fish selection are not to be overlooked. [caption id=“” align=“aligncenter” width=“500”] 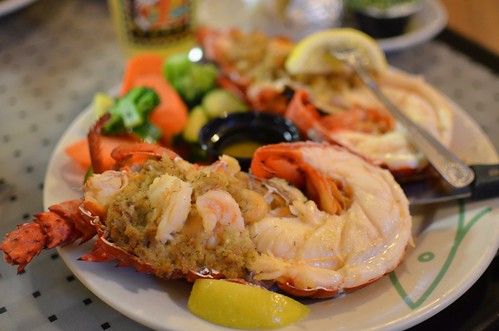 Spiny Lobster Dinner at The Lobster Trap[/caption] The Lobster Trap is another destination for obvious reasons - that is, the Spiny (Pacific) Lobster they have on offer - and other not-so-obvious ones, such as their large tap selection of Lost Coast Brews. Loved their refreshing Great White for sudsing down some stellar seafood plates. If you’re getting other things, you might just want to share the lobster with someone, as I hardly did mine justice when ordered for myself since there were appetizers leading up to it. Catalina is a beautiful island getaway for Angelenos with plenty of activities - land or water - to make a visit enjoyable for anyone. It’s worth it to do some research beforehand so you can make your reservations accordingly. The landscapes are almost European and the weather is consistent with the mildness of Southern California. As for me, I might have just attained a new thirst for zip lining… My weekend was sponsored by Catalina Express.