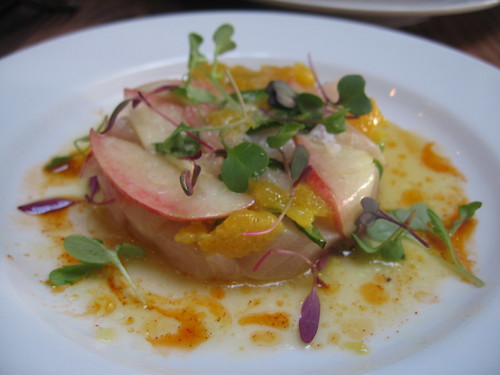 I have to admit: It wasn’t my idea to visit Animal. It was good that I had opportunity to go, though - since it was on @gregwong’s LA hit list as a visiting New Yorker. He’s diligent like that; rather, I am probably lazy. But the unmarked restaurant in the heart of the Fairfax District was a pleasant surprise that exceeded whatever expectations I didn’t have.

I was intrigued with the idea that Animal gets its kicks out of including menu items that make you go, “What?” It’s ambitious but the key is that they actually do an incredible job with execution. The menu changes “daily” - although I was able to find online the same menu I ordered off two weeks ago. I find it hard to believe, though, that a menu becomes tired within a 24 hour period. You’ll also notice with these menus that they don’t try and name any of these concoctions with the intent of superficial glorification. Instead, you order each item as in each of its ingredients - as above. As some like to say, Is it what it is?

I’m only about a year late since Animal was first opened by Jon Shook and Vinny Dotolo - who were named Food & Wine’s Best New Chefs of 2009. Also on their resume are Iron Chef America appearances and a cookbook on the NPR’s 10 Best of 2008 list.

But I’m glad I didn’t know that from the get-go. I like my palate surprised.

And varied. We started off with the amberjack - which was citrusey and refreshing. Since it’s in the same family as yellowtail, its tenderness had a texture that was very similar. We then moved on to their variation on a southern favorite, crispy hominy - sprinkled with lime. It’s a nice fried, salty consistency to chew on while also being a departure from your typical calamari. With hominy being corn without the germ - and back in the day doubling as animal feed - its novelty as a gourmet appetizer as presented at Animal comes well-served with a fluffy shell. 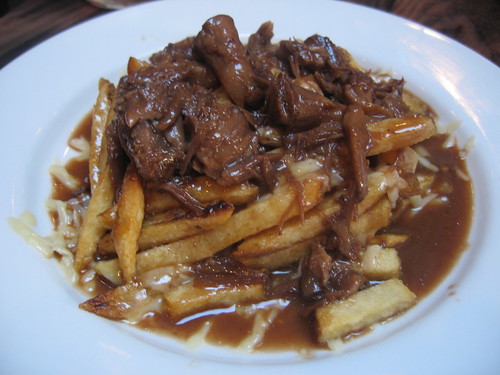 At the same time, there was poutine. I giggled that we had a Canadian dish following a Southern one - and it may have brought back memories of Whistler, BC (the last time I had poutine) had it not been topped with oxtail gravy. This is how rich a poutine should be. It was a perfect texture and if oxtail were a more oft-served meat, this is how I’d see the dish being served in more places - except I would’ve preferred if Animal had included cheese curds and kept that sort of down-homeness about it (the cheddar was shredded). Otherwise it’s a great, luxurious play on a folksy food. 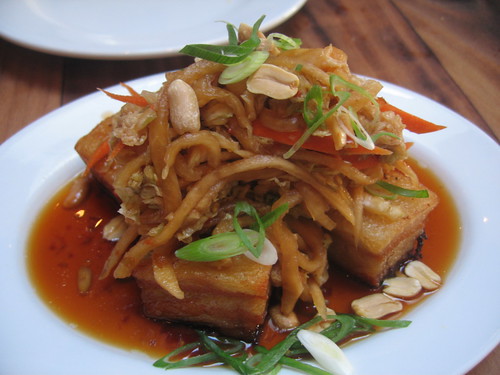 Probably the dish that caught my eye was the pork belly-kimchi. I was interested to try out a recipe with ingredients frequently in Korean cooking. But not only was the pork belly topped with kimchi - it was actually topped with a tossed salad that included, I think, bamboo, daikon and carrots in addition to the peanuts, chili soy sauce and scallion. The result was a somewhat Thai-tasting topping on the pork belly instead of Korean-, which might be what one would expect from kimchi being listed on the menu. But I know what you are asking: How did it taste with the pork belly?! If you get over the shock of pairing a light Thai flavor with the gluttonous part of a pig, it actually went together well. The tenderness of the pork belly offset the cutting taste of the chili soy.

I am curious to go back and try more of Animal’s dishesÂ - as well as give the wine list the proper attention it deserves (we went with the house this time - which was more than respectable). I wouldn’t recommend this place to anyone vegetarian - Can the name spell it out any more clearly? -Â or non-adventuresome with their food, as “Changes and modifications [are] politely declined.” I must also rectify my mistake and intake miscalculation since I’ve failed to try out any of their desserts. But I can say that dinner at Animal will assure an atypical dining experience if that so suits your fancy. I’d encourage a reservation if a walk-in bar seat won’t suit you.