An Elegantly Delicious Lunch at Hatfield's 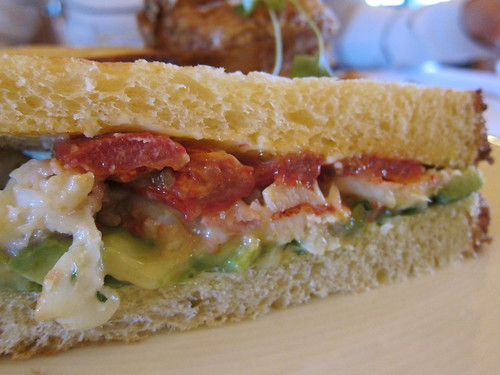 [/caption] It isn’tÂ every night that I can venture out and spend hard-earned dough at the latest and greatest Los Angeles dining spots, lest my wallet cause myÂ ”To Eat” queue to become back-logged. Let’s admit it - all of us are a little commitment-phobic. The way of the game, as is also in my Manhattan playbook, is to take advantage of a good lunch menu when I see one. Hatfield’s would certainly fall under this column. And what’s more, I’m even more enticed to do dinner on the revisit. [caption id=“” align=“alignright” width=“240” caption=“Buttermilk & Tarragon Steamed Chicken Breast ($22)”] 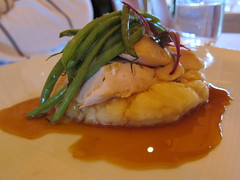 [/caption] On first entry, naturally-lit open spaces are further softened by the pastel and natural woodenÂ hues of the walls and furniture. It’s an inviting and pleasant space well-acclimated to the middle of the day and I could deduce it undergoes an easy transformation to provide a romantic feel come sundown.

Most importantly, however,Â the food is top-notch. The Lobster Club, which comes framed between two slices of perfectly buttery brioche, is titillating and flat-out unbelievably indulgent. On the side were beautifully battered and fried curry onion rings, probably the best onion rings I’ve ever had - topping all the others in both texture and flavor. The Buttermilk & Tarragon Steamed Chicken Breast was also extremely tasty, with its steamed preparation keeping the white meat tender and even juicy while it and the potato smash areÂ ironically yetÂ appropriately sauced with gravy. 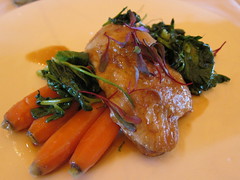 [/caption] If you prefer a course-built lunch, there are two prix fixe menu options, with the Studio Prix Fixe choice providing a more-than affordable $19. It starts off with a self-declared “Piping Hot” Butternut Squash Soup. They weren’t kidding - and it was a thankful reminder that this is exactly how delicious soup should be served. I craved more, while knowing that my Crispy Confit Chicken Leg was coming to alleviate my dark meat fix - and it didn’t disappoint. It’s imperative to note here that already I had tasted two chicken dishes at the same restaurant that didn’t disappoint but what’s even more, actually impressed. Since then, the main course has changed to Pork Loin and I’d just as easily lunch at Hatfield’s again to try that. 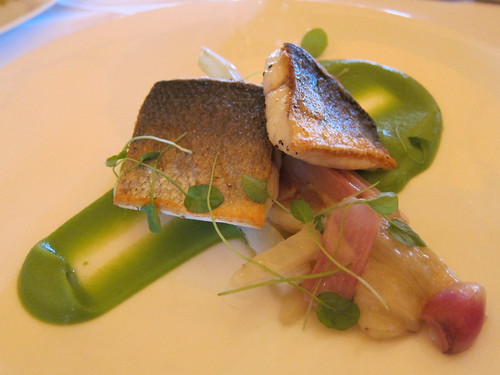 If you prefer to step up your prix fixe to the still-affordable $29, you’ll get upgrades to seafood in the main course and a tailored, heavenly dessert from a standard scoop of sorbet. It’s good utilization ofÂ the ingredients - with the perfectly Pan-Roasted Seabass providing extraordinary flavor against the pea puree and pickled onion backdrop. The Buttermilk Panna Cotta, which itself came with a scoop of Meyer Lemon sorbet and sliced kumquats as garnishÂ is rich, tangy, sweetÂ and overallÂ divine. No arguments there - and none, either, with the Cinnamon Swirl Brioche Pudding, which came paired with Pear Confit, Maple Syrup Ice Cream and a Cinnamon Toast Chip.

Though Buttermilk and Brioche be a heavyÂ theme in our (Sam, Lindsay’s and my) lunch - I couldn’t help but note how unbelievably light and whimsical the presentation was throughout the meal. Perhaps Hatfield’s could benefit from additional staff during lunch time - as they seemed to be short on our visit, but if that requires more warm bodies to fill the dining room, this would be my eager vote to encourage others to dine at Hatfield’s during the dayÂ for the sake of making steady my own course pacing. Their food is absolutely delicious and the service does well with what they are given. The glass-encased kitchen adds to the open feel of the dining room, which completes an extraordinary lunch experience. And now for dinner… 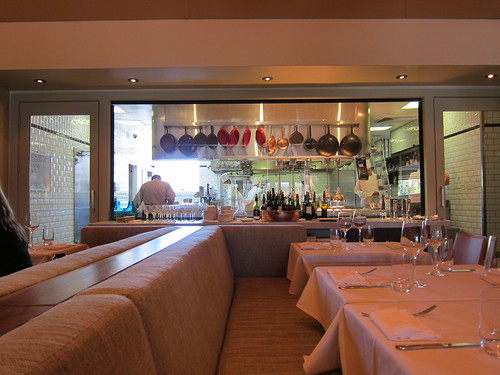