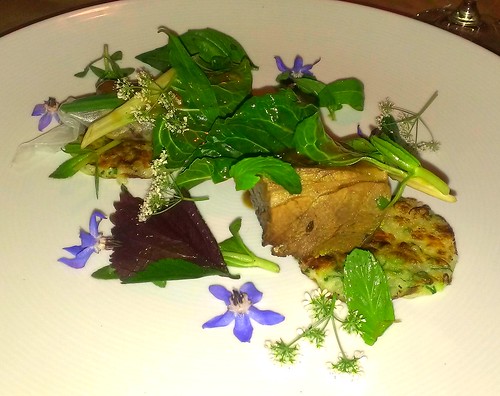 Short Rib cooked in Pho, Xiu Mai, Scallion Pancake, Herbs[/caption] I first visited the space owned by Bill Didonna and Charles Kelly when it was Allston Yacht Club. Since then, the space had taken a 180 degree turn away from its incarnation as a casual, neighborhood spot. Though there’s no warmth lacking from the feel that emanated throughout Allston’s dining room, it has evolved to the kind of environment that encourages diners’ curiosity for new things. [caption id=“” align=“alignright” width=“240”] 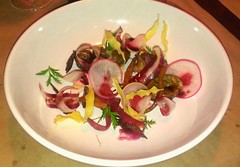 Carrot Salad[/caption] Allumette, as it stands now, is an ambitious venture in avant-garde a la carte with dishes best shared and a tasting menu option to be made available soon. Chef Miles Thompson, at a young 24 who had previously served as sous chef at Son of a Gun (and starred in a Miranda July film), first established his own culinary identity in town via a pop-up stint known as The Vagrancy Project held in the same restaurant. Didonna and Kelly were so impressed, they brought him on to helm the reinvention of their permanent Echo Park establishment. A reinvention, Allumette is - not only in cuisine but in its vision of Echo Park as a place to eat. To dine. I can’t think of many places in the neighborhood that start, on average, at $14 per plate (with the exception of two vegetable dishes, at $8). But I also can’t think of any other places that are open only Wednesday through Saturday, either. With Red Hill, which stands across the street, first ushering in flashes of elevated eating not too long ago, the stage is perhaps set for Allumette to take Echo Park to even higher levels. [caption id=“” align=“alignleft” width=“240”] 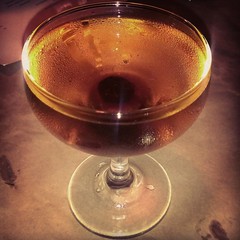 Smoking Gun[/caption] Not the least of ways to do that is to bring the cocktail program up to snuff, and in this case Serena Herrick of Harvard Stone has done a spectacular job of creating a cocktail menu that is a lovely collection of variations on the classics. The drinks match the inventive menu quite nicely with as wide a range that can be achieved with 7 cocktails - enough to satisfy veteran cocktailians and novice drinkers, alike, with none of the dumbing down you’ll usually find elsewhere (don’t expect to see vodka this time around, at least). My favorites were the Negroni Sbagliato #2, a lighter version of the classic aperitif, and especially the spirits-forward Smoking Gun, made with Vida Mezcal, Cynar and Calisaya. The frothy and sumptuous Gentleman’s Breakfast goes down ever so easily while the orgeat and pineapple gomme do such a great job of balancing out the overproof Smith & Cross in the Last Ango. The creativity in Chef Thompson’s current menu materializes in a fascination with taking Asian dishes out of their context. The main attraction of the night came in the form of Short Rib cooked in Pho Broth, yet plated alongside a mini scallion pancake and xiu mai wrapped in a spring roll wrapper, altogether garnished with herbs such as tiato. The short rib itself was perfectly cooked and enough to stand on its own, even though its cohesiveness with the pancake and dumpling was elusive. [caption id=“” align=“alignright” width=“240”] 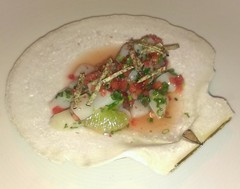 Scallop Ceviche[/caption] The Szechuan Pork Dumpling came wrapped in pasta in lieu of the traditional, giving it a nice bite. The salmon roe deliciously brought out the pork flavors in the filling while the spicy black vinegar and tarragon were a great way to brighten up the plate. What was really lovely was the Carrot Salad, complete with sunchokes, radishes, pickled turnips and dressed ever so lightly in black carrot syrup. A nice departure from your usual beet salad, it was an excellent introduction to the meal as a whole. Another favorite was the Scallop Ceviche, with strawberries, black truffle, citrus, and elderflower. It was beautifully delicate with just enough truffles to give it weight. As uni pasta is really popular right now, I found the Cavatelli sauced with Uni Ragu and puddled with pea puree a pleasant dish that found a good balance between the rich and sweet, with poached mushrooms bringing the dish’s earthiness to the forefront. [caption id=“” align=“alignleft” width=“240”] 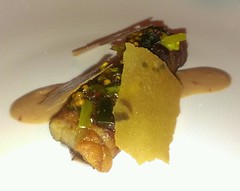 Pork Shoulder, Bacon, Crosnes, Caramelized Onions, Feuille de Brick[/caption] I really enjoyed the little intermezzo bites in between a few of the courses, such as the Fairy Squid with cilantro flower and lime ponzu. The fried oyster in kimchi sauce was also a delicious gobble - something I could have used more of. Alas, there were plenty of other things to focus on. I appreciated the citrus that Miles used to balance out his dishes - including the expertly cooked Octopus, Sour Apple Syrup, Cardamom Butterscotch Potato, Sorrel and Grapefruit (!) - another one of my absolute favorites. It’ll be interesting to see what he does when the weather warms up even more, so we get to see what he does with the season changes. Visit Allumette for the adventure, and with others who also love to experiment - and don’t mind a slightly higher price point that adventure requires. There’s really interesting things going on, here, and it seems as though Chef Miles is only getting started. All food and cocktails were hosted.