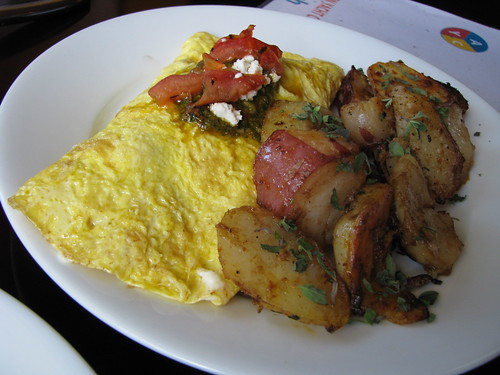 I’ve always wondered about the “sceney” brunch places around LA. There’s inevitably a patio, 5 dressed-up chihuahuas around said patio and a long wait for food. The pretty people make a day of it but let’s be real - sometimes you just really want a solid, no-nonsense brunch without spending too much more money the morning after a night of questionable choices made. There are few places I can think of in LA where you can go have said brunch with little hassle - but the good news is, if you’re an Eastsider, there’s always Allston Yacht Club. 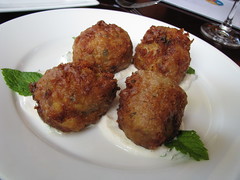 [/caption] It’s an affordable place that won’t sell you on its distracting scene - just the neighborhood appeal. Everything brunch (and lunch and dinner, actually) is priced under $10. A great thing to ease that splitting headache you may or may not have going on. I visited AYC one Sunday early-afternoon for some treats with my web-dev-dude Roycifer. The sweet potato fritters were a good start - they had a surprising twist of cinnamon and were a nice flirtation with dessert. Next, we ordered cocktails - after all, brunch doesn’t have rules. I went festive and got a Figgy Pudding (fig-infused bourbon, egg nog and egg white). It really was a perfect holiday cocktail - the egg nog was at just the right weight (not too heavy) and entirely drinkable for any time of day. Yum. Royce went with a tequila cocktail in keeping with his spirit of choice: Basement window - utilizing tequila, Kahlua and pomegranate puree. This cocktail will take you down into said basement and beat you up if you forget what you’re drinking. A very strong cocktail so very subtly sweetened by the touch of Kahlua and puree, but so delicious. One of the weightier tequila concoctions I’ve tried and it’s very welcomed. [caption id=“” align=“alignleft” width=“180” caption=“Basement window”] 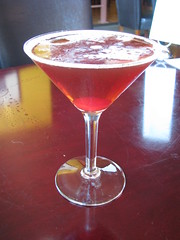 [/caption] I was feeling simple this particular day so I went with the classic biscuits & gravy. Chopped, sweet onions were in the gravy and fried sage topped the dish - sometimes, this is all you need to soak up the libations from the night before. Roycifer’s omelet, however, was one that I could’ve stolen off his plate had he not inhaled it first. The thickness to which the outside egg was cooked and the filling was hearty and hot. If you’re in the area and looking to sit down for some reasonably-priced, imaginative neighborhood eats, look no further than Allston Yacht Club. Cocktails are also $9 or less and seasonal selections are always offered and successfully executed (see: Figgy Pudding). The good-time, no-nonsense vibe of the place is so down-to-earth, you’ll out-hip the hipsters who are shelling out $15 for pancakes. Check below for the entire Sunday brunch menu:

All aforementioned food was hosted.

My previous visit to AYC