All Aboard: Blogger Bar Hop on the Trolley of Death 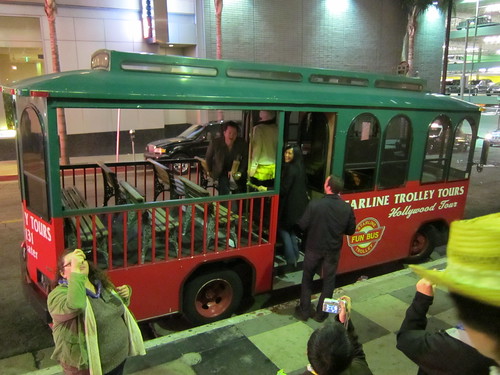 [/caption] When Caroline on Crack (recap) asked me to join her and a bunch of bloggers, Plymouth Gin (represented by Erick Castro) and Aidan Demarest on a blogger bar hop, IÂ could not turnÂ her down.Â Lo and behold, the beauty is in the details and what we found out later was that our vehicle would be a half-open-air trolley, which would be used to take us to 5 bars in 7 hours. Yes, 5 bars in 7 hours. With driving time, this amounted to capping our time at each bar at 45 minutes! [caption id=“” align=“alignright” width=“240” caption=“Plymouth Gin, a punchbowl and a couple bowling lanes”] 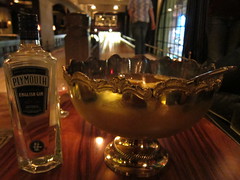 [/caption] I prepared for the night by drinking plenty of water and ONE Coconut Water (great for electrolytes) during the day - which no doubt aided my endurance for the bar hop. We started out at The Spare Room and again, I got a few frames in (including a few spares - ha!) in between some beautiful cocktails - starting off with a Bloggers Brew (Plymouth Gin, pineapple, velvet falernum, lemon, Earl Grey tea and spices) - and finishing off with a punch bowl. My new cocktail from this bar was an off-menu You Drink Our Milkshake with vodka, cream, coffee liqueur, cacao - essentially a better White Russian. Delicioso. We crammed into the photo booth to take our picture, polished off our drinks, filled up our score cards (that’s 5 drinks to hit at each of the 5 bars with a bartender signing off) and headed to the trolley for our stop at Big Bar, adjacent to The Alcove in Los Feliz. We also kidnapped a few recruits like Naomi Schimek. We got first tastes of riding in the open air trolley along Hollywood Blvd. on a Monday night while enjoying champagne (and later: PBR and bacon- and fig-infused bourbon bottled up and dubbed “Figgy Smalls”) supplied by Aidan. On board for this adventure were Daniel of Thirsty in LA (recap), Aaron the Savory Hunter, Lindsay of LAist, Josh from Food GPS, Elina Shatkin of LA Weekly Squid Ink, H.C. of LA OC Foodventures and the Examiner. Armed with the hashtag #bloggerbarhop, we set out for some exciting tweets during the course of the night as entertainment fodder for all our followers (Caroline and Daniel do a great job utilizing them in their recaps). [caption id=“” align=“alignleft” width=“240” caption=“Slider with pork, guacamole and jalapeno at Big Bar”] 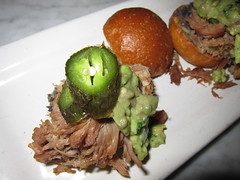 [/caption] As a writer new to the group had repeatedly stressed at Big Bar, “The drinks were sooo good… Soo good!! Soooooo gooooooood.” The rest of us were just conscientious enough to let our palates enjoy that goodness, but yes. They were good, and so were the bar bites, with my favorite being a slider (yeah, I said it) with pork, avocado and jalapeno. Relief from that jalapeno was provided by heavenly bacon-wrapped, goat cheese-stuffed dates, a great lobster ceviche with chips and of course, the gooooood drinks. I definitely applaud Big Bar with successfully completing the task of feeding two handfuls of mostly professional boozers with a superbly executed bar menu in their truly small, cozy bar. I had a really great Aviation here amongst others - like Juan Sevilla’s Merry Widow (dry vermouth, benedictine, bitters & absinthe rinse) and will definitely return for more cocktails. Of course, we kidnapped Juan along with the lovely Mia Sarazen and Rich AndreoliÂ as we left Big Bar and headed for 1886. [caption id=“” align=“alignright” width=“240” caption=“Rose Parade Punch at 1886”] 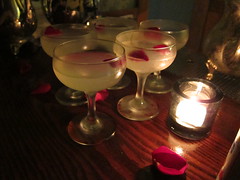 [/caption] 1886 is in Pasadena. The 110N is a common way to get to Pasadena. NotÂ to be deterred by, oh, nighttime Southern California lows or say, freeway-speed wind, and encouraged by a bonus two cocktails on the scorecard, I toughed it out in the open-air, rear section of the trolley while huddling with Lindsay on our wooden bench and the exposed staircase (with Aidan hanging off of it) on our right. After all, how could I cheer for a team that calls the frozen tundra home in the Super Bowl or call Mammoth my second home if I couldn’t handle this? My fingers were frozen as they held the first cocktail that greeted us at 1886 - the Rose Parade Punch (Plymouth gin, roses, cucumber and soda). Everything else that was served at 1886 was delicious, like their Pimm’s Cup made with tequila and grapefruit soda and their Honey Nut Old Fashioned with peanut-infused bourbon. We even ran into a few industry Pasadena folk, so we knew we were in the right bar for having come so far. Our kidnapping victim from 1886 was Marcos Tello, who rode the Trolley of Death with us to Downtown LA’s The Varnish via…you guessed it…110S. Score another 2 bonus cocktails as well as re-frozen 10 fingers for me from the trolley ride. I secured a Medicina Latina at The Varnish and it delivered as always. But it seemed that we had barely arrived before we had to leave for Seven Grand - just a few blocks away. [caption id=“” align=“alignleft” width=“240” caption=“Old Fashioned, Whistle Pig Manhattan”] 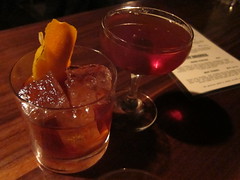 [/caption] Of course, Seven Grand was slammed as it always is and when we arrived we were 4th string at the already 3-deep bar. Before we skidaddled, though, Daniel was able to sneak in an order of a Whistle Pig Manhattan alongside someone else’s Old Fashioned. I stole a sip. ;) Five bars, seven hours. …And Tommy’s. I stuck to chili fries since that was basically all I could handle, but it was a great way to soak up some of the evening’s suds. And back to the Spare Room we went. We tallied up our score cards while a member of our otherwise professional drinking group put his forehead to the bar - the ultimate no-no. To my pleasure, Lindsay and I won with a total tally of 22 cocktails (or make that, 18 cocktails + 2 outdoor trolley rides on the 110 fwy)! Free bowling for us! I’d like to thank Caroline on Crack, Erick Castro of Plymouth Gin and Aidan Demarest for a wonderful time with some fun boozers. Let’s do it again!