Alameda, CA: Touring St. George Spirits Distillery is the Best Thing You Can Do 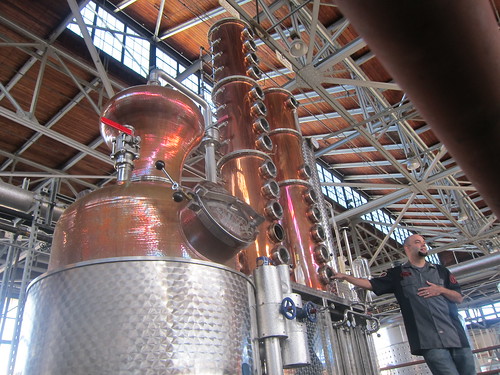 The Stills[/caption] Founded in 1982, St. George Spirits turned 30 with a bang last Friday (photos on Facebook). My own visit, however, was a long time coming. I recently visited family for Thanksgiving in those parts and got to steal away for a day. I used that day to tour the distillery of a long well-regarded craft spirits company I’d become familiar with thanks to wonderful cocktails I’ve had in Los Angeles and beyond. Master distiller Lance Winters and  [caption id=“” align=“alignright” width=“180”] 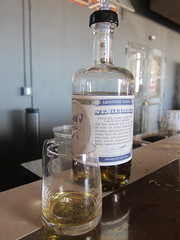 St. George Absinthe Verte[/caption] One of my first tip-offs to St. George Spirits’ product quality was around the time absinthe became legal again in the U.S. (2007); consequently, people were back to getting curious about absinthe. At two particular tastings (one by Natalie Bovis-Nelson at Bar Keeper and the other at Sage inside The Aria, Las Vegas), St. George Absinthe was consistently the last and best I’ve tasted. (As with everything, there is a huge range of absinthes out there, with not the least of popular varieties actually adding green food coloring to their product - choose wisely!) Gradually, as I learned more and more about my innate love for gin, my appreciation for St. George deepened even more. Theirs are stellar. In fact, a great holiday gift idea for your favorite gin lover is their holiday gin 3-pack, which includes their Terroir (their locavore variety), Botanivore (herbaceous, 19 different botanicals) and Dry Rye gins (juniper forward). You can get them at Bar Keeper or K&L for $26. I absolutely love their Terroir. St. George produces Hangar One Vodka, which is distilled not only from potatoes but Viognier grapes and way more interesting. If you’re ever in the Oakland or Northern California area, my advice is to visit St. George Spirits in Alameda and take the free tour. You’ll learn a whole lot - and their facility in itself is awe-inspiring. As is their craft-informed attitude, which you can get a good feel for thanks to everyone who works there (30 employees in all). There’s also a Basic Training tasting option, whereby you get to taste 10 or more spirits for only $15. Included in the tasting is their pear brandy, vodka, Breaking & Entering Blended Bourbon, liqueurs and absinthe. It’s on that tour that you’ll learn not only about their vodka but the following:

One of the main points of contention was that the original label had a monkey banging a bone on a skull. The skull “made too much reference to its hallucinogenic properties of absinthe” according to the TTB. St. George was going to refute this with many examples of skulls in spirits today (e.g. Crystal Head Vodka, for one), but TTB would’ve used that against those other distillers. Instead, St. George decided to stop the fight there and replace it with a Christopher-Walken-on-SNL-inspired cowbell.

Exterior of St. George Spirits[/caption] Our tour guide, Pauly, also did a great job at educating an audience that cared about tasting spirits over getting “tanked” and even addressing the bad habits that often accompany peoples’ drinking (sugar). His practical preventive hangover cure? To prepare, by your bedside, a pint of water, two pieces of bread, a non-caffeinated multi-vitamin and a bottle of Pedialyte. Consume all after getting home safely and before hitting the hay. Never have wiser words been spoken - and this was on a free tour! Another refresher course lesson learned in advanced drinking on the tour was to not treat high proof spirits like you would wine. Stop swirling your high proof alcohol. You are warming it up, making the vapors expand on your taste buds so that it tastes hot. Brandy snifters are meant to heat the alcohol enough through the heat of your palm. And so it continues, St. George educating the rest of America about high-quality, craft spirits. Happy 30th Birthday, St. George Spirits. Thank you for a great 30 years “under the influence;” we’re all looking forward to many, many more.

Tours: Last call is 1 hr before closing time. Groups of 5+ should make a reservation by calling. Calling ahead for smaller parties also encouraged.