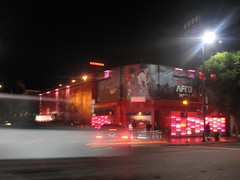 The setting was Geisha House (fitting) and the game was Afro Samurai. Samuel Jackson did voiceovers for the Afro anime-themed high definition game and The Rza the soundtrack. Both were on hand to appear and perform, respectively, and neither disappointed.

The open bar with Samurai-themed coctailsÂ were a welcome feature of the night. In addition to the goodie bag, which included an action figure from the video game, a PS3 version of the game itself and the Afro Samurai DVD Director’s Cut. 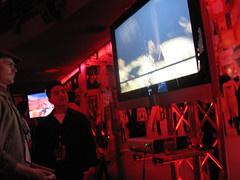 And what would a video game launch party be without plasmas all over the club so you could play the game right then and there? Since I would never pretend to be aÂ gamer outside Guitar Hero and Rock Band (hell - I don’t even have a console and I can still probably rock your pants off), I held a short-lived Twitter contest in which I gave the PS3 game awayÂ (Kyle won). 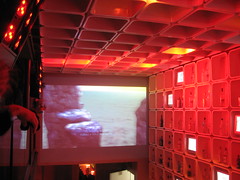 Samuel Jackson - complete with brimmed cap -Â hung out with us commoners for about an hour before bailing. A few minutes after that, we heard The Rza start up his set on the second floor of the club. Tear it up, he did. The party was bumpin’ still by the time I left but I felt satisfied I gave it my all for a school night. Many thanks goes toÂ Tara and her hubby for a great night!!