Roycifer and I have had a display, lately, of slightly masochistic behavior. Okay, maybe I’m being dramatic. Let me explain. We’ve been visiting Korean restaurants in Koreatown, just the two of us, for about … lessee …Â 5 trips in the span of not more than a week.Â  That is, while not having a Korean-speaking fellow accompany us. Now if you have ever visited a Los Angeles Koreatown establishment while not being Korean–and no one in your party able to speak Korean–you know exactly what I mean. Think: potentially poor mean service, servers exchanging annoyed looks with one another, Korean patrons who unabashedly look at you while conferring back to themselves in Korean about how funny-looking you are (I imagine that’s what they’re discussing, anyway). All this, though, has not stood in our way. We’ve been on a bit of a Korean noodling kick, and we’ve been determined to get our noodling fix. Nothing would stop us. While I could certainly use one, two or eight Korean friends who would be willing to have me tag along to eateries in nearby Ktown, I must admit that Roycifer and I have enjoyed our adventures thus far. And to be fair, we’ve had mostly pleasant experiences in each of the restaurants, what with the help of smiling, nodding, gesturing and pointing. Also, it helps a lot when the menus have numbers next to each item. “Number five, please.” I admit I was a bit hasty to judge and despite prior experience at, for instance, Korean BBQ places–the ladies have all been really nice. And the food. The food. Every bowl of noodles we’ve encountered has been drastically different from the last, despite their being called the same thing in Korean. Adventures in noodles, indeed. I’ve taken a liking to chik naeng-myun. They are black arrowroot noodles in cold broth, which are a chewier and more gluttonous version than the clear buckwheat variety. 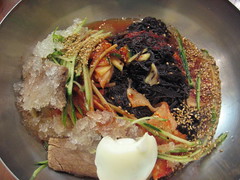 This particular bowl, I had at the Yuchun at 6th and Alexandria, just as they were closing. Perhaps that’s why I barely got any broth.Â  And so an important lesson in Korean noodling is:Â  Go well in advance before close.Â

We had also tried a different hole-in-the-wall a bit off Wilshire about a half-hour before close, and they had stopped serving noodles entirely; so, we defaulted to two servings of watered-down soon dubu (spicy tofu soup).Â  Allow ample time before restaurant closes to partake in noodles, because you will get the bottom of the batch or not get any, at all.

If it’s too late, you can always battle the college clubbers (who are not coming from Le Prive since it’s shut down, now) and head to Hodori or Nak Won House at Western and Olympic, which are both open 24⁄7. I personally would recommend Nak Won House, though, as I’ve consistently had better experiences there.*

I had a bowl of chik nyeng-myun at a different Yuchun on Olympic and it came with a proportionate amount of broth. I added a bit of mustard, as I like to do with my cold noodles, and it was perfect. So tasty.Â  Perhaps my first bowl would have been as tasty and proportionate if I had visited the first Yuchun earlier in the day.

I also gave it a shot, as his bowls of hot, handmade noodles looked mighty tasty to me.Â  A typical bowl might be flavored with anchovies, and eventually we found a place that was known for their Kal Gook Soo.

We went to Ma Dong Gook Soo on Western to try them out. 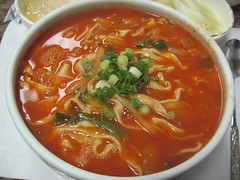 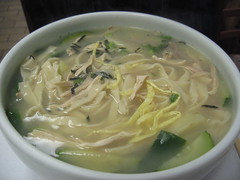 I got the kimchi variety of their handmade noodles and Roycifer got the chicken-flavored. Both our bowls were tasty and mighty hearty.Â  My bowl was perfectly spicy, and they gave Roycifer some chili paste to add to his.Â  One thing’s for sure:Â  Our adventures aren’t over.Â  I’ll be reporting back.Â  Also, any suggestions as to a type of noodle or restaurants in Koreatown or elsewhere to try are greatly appreciated!!Â  :) Pasta?Â  Puh-leeeze…Marco Polo was a thief.Â  (Kidding.) Love, *e * BTW, have you noticed that the ladies who work at Nak Won step outside onto the sidewalk to detract foot-traffic heading to Hodori into their own restaurant?Â  I imagine the “Ladies of Nak Won” and the “Ladies of Hodori” might have some sort of monthly midnight brawl in the depths of Koreatown, whereas they “bring it on” for some sort of cash prize awarded to the winner.