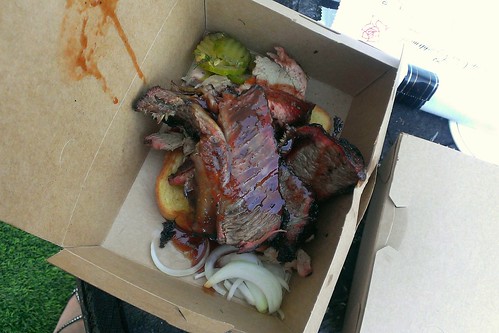 Serious Barbecue - Pork Shoulder, Beef Ribs[/caption] While I have had a lot of close calls, I recently came upon what I can honestly call “the best barbecue” I’ve had in my entire life. And I owe that honor to a summer-long residency by Adam Perry Lang, who currently lives (that’s what the Airstream is for), cooks and feeds serious barbecue seekers on the Jimmy Kimmel Live! backlot in Hollywood. From now until September 5th, he’ll be serving up his pecan wood-smoked specialties every Tuesday, Wednesday and Thursday for lunch. Everything in this awesome ‘cue is made from scratch (okay, perhaps not the meats), from the charcoal in the Texas burn pit to his 2-ton, custom pit smoker - and even the cutlery, which he literally carves himself. [caption id=“” align=“alignright” width=“240”]

Adam Perry Lang & his Texas burn pit[/caption] The cuts supposedly vary every day, but he’s been most recently serving his award-winning pork shoulder and beef short ribs. Prices vary from $15 to $50, but trust me - it is well worth it. The flavor in the meats and the sauce he serves with it are both to die for. The juicy textures of the smoked cuts are just so succulent. George Dickel provided some tasty whiskey to wash it down during the media event. The great thing about it is that Adam will also be donating delicious barbecue to P.A.T.H. and the L.A.C.E.R. Program, which benefits the homeless with their transition and underserved youth with arts and literacy after-school programs. This stint is in celebration of the reissue of his barbecue book, Serious Barbecue, so if you want to recreate some of this crazy delicious barbecue at home, buy a copy for $35 on-site or online. [caption id=“” align=“aligncenter” width=“500”] 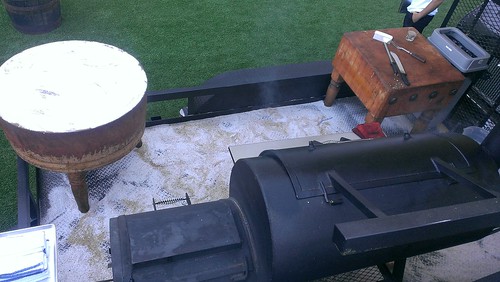 Tuesdays, Wednesdays and Thursdays until September 5, 2013