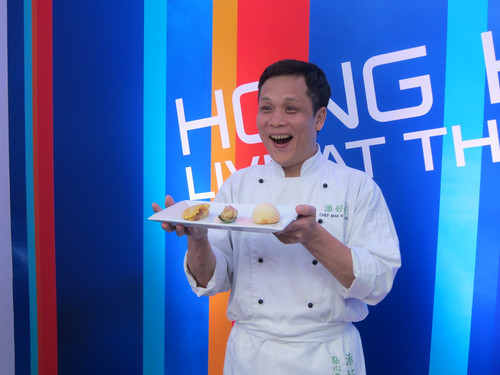 Chef Kwai- Pui Mak[/caption] Over the weekend, I had the chance to meet not one, but three, Michelin-starred chefs from Hong Kong. They included Chef Kwai-Pui Mak of Tim Ho Wan, Chef Mango Tsang of Ming Court in Langham Place and Chef Kam-Fu Cheng of Celebrity Cuisine. During an exclusive event with industry and media, I learned a little bit about their mission to spread the word about all things Hong Kong - but especially cuisine - to Los Angeles. [caption id=“” align=“alignright” width=“240”] 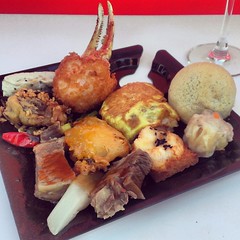 Hong Kong Sampler[/caption] While Chef Mango Tsang, the fine dining guru and Marathon-runner of the trio, lamented some of the dishes didn’t come out quite right because of the unpredictability of American ingredients, I thought everything - including his fried shrimp cake and a chicken paste - tasted delicious. Unfortunately, you can only expect to get the real thing while visiting each of the chefs’ restaurants in their native Hong Kong. Chef Kam-fu Cheng, who first became popular through his private dining business, fixed a delicious crab claw. My favorite bite of the sampler, by Chef Kwai-pui Mak, had to be the char siu bao, or pork bun. The bun had this flaky yet chewy consistency to it that I hadn’t had anywhere else and made for probably the best pork bun I had had anywhere. His tenure at Lung King Hin inside the Four Seasons Hong Kong saw three Michelin stars, and his Tim Ho Wan Dim Sum restaurant received one star within a year of opening, so I can see why his dim sum is top notch. Overall, it was a not-to-be-missed opportunity to see the top Hong Kong chefs right here in Los Angeles. It’s opened my eyes to the possibilities of a trip to Hong Kong, undoubtedly a culinary wonderland. Now if I can see, taste and experience it for myself…! If you’re at all curious about how the Hong Kong chefs regard Chinese food in L.A., you’d best be on the lookout for the update from Jonathan Gold, who took them out to dim sum during one of their rare chances at off-time. [](http://www.latimes.com/features/food/dailydish/la-dd-hong-kong-chefs-chap1,0,108454.story “The chefs from Hong Kong want dim sum. Where do you take them? - LA Times”)