I grew up with a particular older brother who had all of the James Bond flicks (half on Beta, half on VHS), so I had enough exposure to the British spy series to pick the cues up quite a few years later. Just recently, it re-started with my viewing of the Mad Men Season 5 finale. That Peggy and Don viewed Casino Royale while playing hooky from work and the finale’s credits closed out with _You Only Live Twice _made me take notice of everything going on around us. My girlfriend, who volunteers at The Aero, mentioned their Bond marathon. The James Bond frenzy is currently overtaking Los Angeles. [caption id=“” align=“alignright” width=“160”] 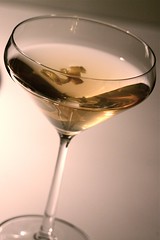 Vesper Martini[/caption] Why? Only the 50th anniversary of the Sean Connery-to-Daniel Craig franchise, I eventually found out, and we Angelenos have plenty of chances to get dosages of our own: American Cinematheque’s The Aero Theatre (Santa Monica) is concluding their Complete James Bond Retrospective this weekend with Golden Eye and Tomorrow Never Dies on Friday, June 22nd and Casino Royale and Quantum of Solace on Sunday, June 24th. The Egyptian(Hollywood) will be screening The World Is Not Enough and Die Another day on Saturday, the 23rd. If you want to see Bond inspiration articulated in the museum, check out the  ”…Is James Bond” exhibit at LACMA, now through September 9, which happens to be co-organized with Loyola Marymount School of Film and Television. You can also catch Bond movie double screenings here every Thursday in July and September. (You can also score a free summer pass at the museum with purchase of regular general admission!)

But it’s not really celebrating Bond if you don’t toast his tradition of drinking, or concocting, the classics. Lo and behold - today is also National Martini Day! But if you’re like me, you already know which places really know how to make a martini just how you like it. So let’s mix things up with some help from the spy. If you want to go for a classic formulated and named by the spy himself a la Casino Royale (circa 1953), and the cocktail that just so happens to be Ian Fleming’s favorite, you’ll look for a Vesper. Just remember that you’ll want to correct that infamous phrase to “Stirred, not shaken” and you’re set. (No man is perfect, after all.) But if James Bond were in Los Angeles, you can bet that you’d see him at one of these awesome bars: [caption id=“” align=“alignleft” width=“320”] 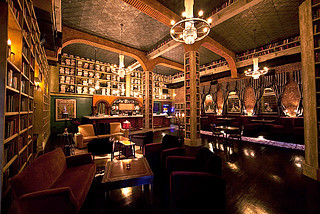 Hemingway’s Lounge[/caption] After a screening or exhibit viewing at LACMA, head on over to the adjacent Ray’s & Stark Bar, the bar of which is helmed by Paul Sanguinetti, where you can order a Cali Blonde (think Eva Green with a dye job). It’s essentially a Vesper made with Hangar One vodka, Martin Millers gin, Lillet Blanc and lemon peel. If you prefer the flipped version, you’ll go for the Reverse Vesper at Hemingway’s Lounge with Alex Straus: 3 oz Akvinta Vodka 1 oz Beefeater Gin 1⁄2 oz Lillet Blanc Stir these with ice, strain and garnish with a twist Here with the Reverse, the vodka and gin proportions are switched because after all, 007 gravitated more towards vodka further along his career. 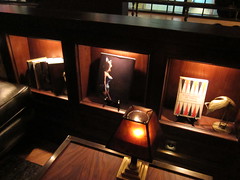 Lounge at The Spare Room[/caption] Take things to the next level with a barrel-aged cocktail tribute to author Ian Fleming called The Living Daylights over at The Spare Room inside Hollywood’s Roosevelt Hotel. Spiced rum Dry vermouth Velvet Falernum Green Chartreuse Jerry Thomas bitters Naomi Schimek, the bar manager, explains, “Ian Fleming wrote all of the James Bond stories from his estate Goldeneye on the beach in Jamaica,” where he of course drank a lot of rum, too. “Like cocktail aging in a barrel, a story develops over time, so we thought this was a fitting tribute to Mr. Fleming, the brilliant man who gave us so many wonderful stories.” Fantastic! (Though Naomi had me at Velvet Falernum and Green Chartreuse.) 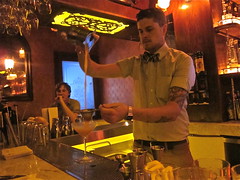 David Fernie at Pour Vous[/caption] You can also head on over to Steve Livigni and Pablo Moix‘s Pour Vous, the beautiful new, admittedly French-and-not-English cocktail and Champagne bar. But never fear, because Lindsay Nader has put together the vermouth-based Eau de Chambery, an herbal extravaganza that Pablo can see “Bond sipping [on] as he spits game at a model.”

Stir these with ice, strain and pour into coupe glass and garnish with a twist

Sounds like the perfect dry aperitif to get the spy started…

But we mustn’t forget the Classic Daquiri at Steve & Pablo’s La Descarga, which always come out superb. Again, here we’re waxing Fleming’s glamorous time in the Caribbean. Kenny Arbuckle will have you covered and it is always a fantastic time with plenty of live music and great tunes. If you want rum neat - and why wouldn’t you? - don’t miss the sipping bar in the cigar lounge out back. There are specialty rums that make limited appearances but always leave you craving more.

Viva la Bond and Happy National (modified) Martini Day! I’m definitely grabbing a Vesper or something else Bond-inspired after work. Enjoy you and yours!