A Pairing Made In Heaven: Dassai Sake Tasting at Sushi Central 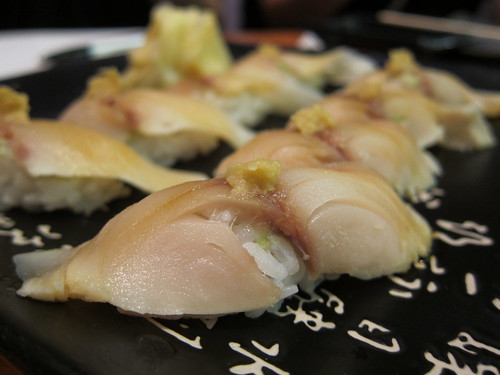 [/caption] It was a February night in Palms when I joined a few other writers in a lesson on sake by none other than Sake Master Yuji Matsumoto. The featured brewer was Dassai, who only makes Junmai Daiginjo sake - pure sake (no added alcohol) made withÂ at least 50% polished rice grain. [caption id=“” align=“alignright” width=“240” caption=“Dassai Junmai Daiginjo 50 (Regular and Unfiltered/Sparkling)”] 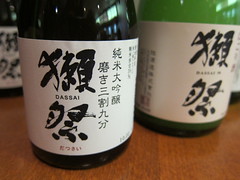 [/caption] It was my first time at Sushi Central and though I could appreciate the casual atmosphere - IÂ won’t be fooled again by the inconspicuous signage nor strip mall placement. It was all about the fish, and thanks to their good sushi that I could really and truly appreciate the sake we were tasting. I plan to return for the omakase when I get my next sushi kick. We were graced by the presence of Kazuhiro Sakurai, the Dassai representative and 4th generation Vice President of the brewery, who flew in to personally tell us about his family’s sakes. Sushi chef Philip Yi (once a challenged chef in Bobby Flay’s Throwdown!) was gracious throughout the night and wowed us with his extremely good sushi. For starters, the slightly-smoky, ultra-tenderÂ OnoÂ (Yi’s self-describedÂ ”crack” fish)Â left us eager for the night to come. Our saucers remained untouched and unused the entire night, leaving the chef full reign over our tastebuds with no adulteration by added wasabi nor soy sauce. [caption id=“” align=“alignleft” width=“240” caption=“Ono Sushi”] 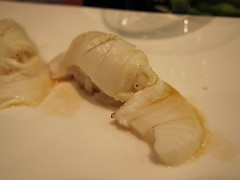 [/caption] We started off our sake tasting with the most refined sake of the night, the 23 Dassai Junmai Daiginjo ($80) - which I thought was unusual at the time since I’m accustomed to working up to the highest quality from the low. Later, the order would make sense. The ultra-smooth sake was so clean and so delicious and went well with the yellowtail it was paired with. Light sake paired with a white fish - it was perfectly complimentary. [caption id=“” align=“alignright” width=“240” caption=“Salmon Belly Sushi”] 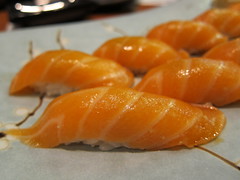 [/caption] After that came the 50 Dassai, which was still very smooth but had a little bit more acidity since less of the rice grain was polished away. This was perfect because when paired with salmon belly sushi, it cut across the fattier fish - but the sake still had a good amount of finesse. Perfectly paired sake and sushi is a truly heavenly thing. Next was the Saba, or Japanese Mackerel (title picture) - which is a saltier, less fatty fish and went well with the 39 Dassai - a variety which isn’t available in the United States. We also tried a very lightly-carbonated, unfiltered version of the 50 Dassai - only available Stateside and perfectly complimented sushi chef Philip Yi’s spicy tuna roll. Before this night, I had shunned spicy tuna rolls - but there was excellent tuna, very little mayo and a good amount of spice in the roll; I could truly appreciate the ingredients in this version of what is typically regarded as “filler appetizer!” [caption id=“” align=“alignleft” width=“240” caption=“Blue Crab Roll”] 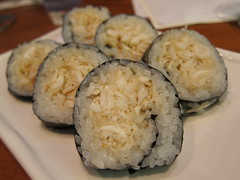 [/caption] Now the blue crab roll was simplyÂ buttery goodness rolled in rice and seaweed. I loved how much crab was rolled into the sushi rice and the Dassai 50 was also perfect in cutting through the richness. I would certainly like to experience this pairing again! Only about a month ago, starting with the sake & cheese pairing event, did I really start appreciating sake - and I’m ever so grateful I had the opportunity to learn even more about the fermented beverage in its pairing with sushi. It has such a clean application to it which can only go more appreciated when one learns more about its origins, how it’s made and the different types. As for Sushi Central -Â which offers omakase for its customers ranging from $55 - $125 - they also do not haveÂ a liquor license and so you are welcome to B.Y.O.B. with no corkage fee! I cannot wait to go shopping for bottles to bring back and enjoy with my sushi! All aforementioned sake and sushi were hosted. 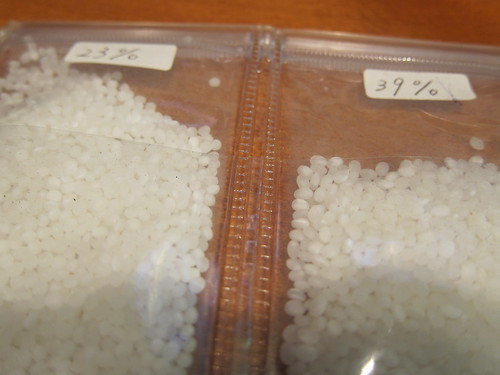