A Neopolitan Tradition Continues At Marino 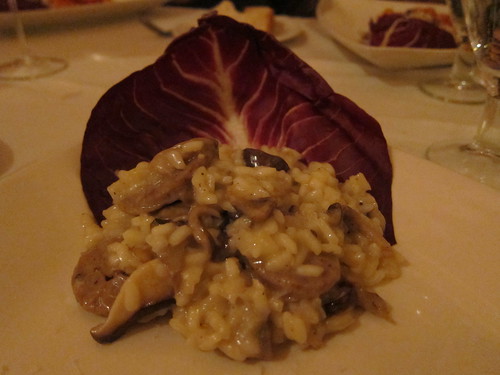 [/caption] There are few Italian restaurants that strike meÂ as havingÂ an authentic charm it can call its own. But now that I’ve been introduced to to the hospitality and cuisineÂ of Marino - I can now point to a place that prides itself as much on attentive serviceÂ as its food.Â Great conversation andÂ the freshest ingredients: I canÂ only describe it asÂ The Italian Way. I’m a fan. [caption id=“” align=“alignright” width=“240” caption=“Antipasti”] 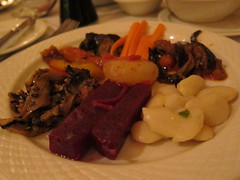 [/caption] Sal Marino - son of original restauranteur Ciro, who first opened Il Grano in Santa Monica - personallyÂ took care of Caroline on Crack, Joshua of FoodGPS and me one night at the restaurant nearby Paramount Pictures. As our team of servers came out with our food, we were increasingly overwhelmed by not only the quantity but also the presentation of things on their menu. We started out with an antipasti dish that included eggplant, zucchini, beets, sweet roasted red and yellow peppers with capers and cipollini onionsÂ seasoned withÂ marinara. Decidedly seasonal, the dish whetted our appetites for the real heavyweights to come. [caption id=“” align=“alignleft” width=“240” caption=“Carciofi Ripieni alla Rosanna “] 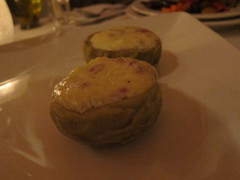 [/caption] The baked artichokes were rich, creamy and stuffed with two different cheeses. Though they look small, they were so rich as an appetizer I could have actually shared one. Call me weaksauce. The fried calamari that came out were noticeably fresh and had a perfect breading. Apparently, the calamari doubles as that also supplied to sushi chefs - not your typical filler appetizer with something to hide from being fried. The Risotto alla Salsiccia e Funghi came paired with a delicious,Â house-made Maccheroncini sauced with an Amatriciana marinara (tomato with caramelized white onion and pancetta). The risotto in particular was my favorite - okay, yes, I am partial to risotto - but the homemade sausage in the risotto was especially good, as was the fact that three different kinds of mushrooms were included: oyster, shiitake and porcini. The porcini is so delicate it actually dissolves into the risotto upon preparation. [caption id=“” align=“aligncenter” width=“500” caption=“Baked Marseilles Branzino”] 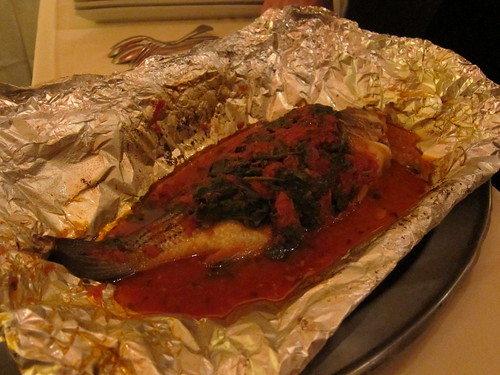 [/caption] At Marino, branzino is available three ways - grilled, salted and baked, or sauced and baked. We got the latter (salt, pepper and garlic are all that accompany the marinara and spinach), and it came encased in a folding of aluminum foil. [caption id=“” align=“alignright” width=“240” caption=“Scallopine di Vitella alla Sorrentina “] 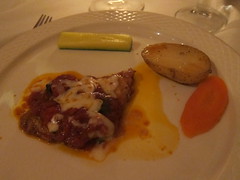 [/caption] Many, upon first glance, claim that the fish was prepared in too much oil - but the oils surrounding the fish are actually from the fish itself. A beautifully simple dish, the branzino was incredibly tender and moist. From the fish we moved on to veal: Scallopine di Vitella alla Sorrentina is a thin cut of veal topped with mozzarella and marinara. At this point I was pretty much going to burst, but not before deciding that my lone bite was very tender. [caption id=“” align=“alignleft” width=“240” caption=“Filleto alla Sinatra”] 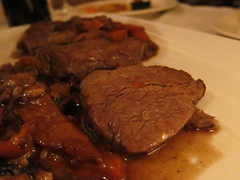 [/caption] The lead-in to our next and final main dish was rather disposed to the star power of Marino - which is no coincidence with its proximity to the nearby Hollywood studios. In fact, we sat at the same table as one-time frequenter Frank Sinatra, who has a filet mignon he often ordered named after him. It’s a delicious, lean cut prepared with red wine, peppers and mushrooms. Perhaps its name overshadows the steak, itself, as it was good but not particularly remarkable. Their house-made ricotta cheesecake was probably my favorite dessert that I’ve had in recent memory. The ricotta is also made in-house and our slices were seasoned with lemon peel, orange and rosewater. It wasn’t too sweet and the creamy consistency was perfect - I would go back to have another slice! [caption id=“” align=“aligncenter” width=“500” caption=“House-made Ricotta Cheesecake”] 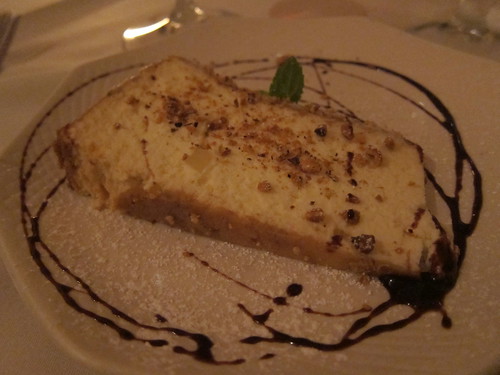 [/caption] Marino provided a very warm take on Southern Italian cuisine. As Sal Marino conveyed, the family aims to provide a traditional experience that is adapted to today’s diner, combining the old with the new. We were entertained byÂ stories of old Hollywood clientele that have graced the restaurant; you can expect to see old or new; A-, B- or D-listÂ Hollywood if you stop by for a meal. And speaking of the “new,” an update to the historic dining room will be underway in a few months - so stay tuned for some remodeling dates in the future. Also: Il Grano and Marino are doing dinners tomorrow and Wednesday in conjunction with Zagat (mention “Zagat Presents” upon reservation). They are $55 for the dinner and an additional $35 for the wine pairing. Il Grano: Tuesday, January 26, 2010 (323.477.7886)