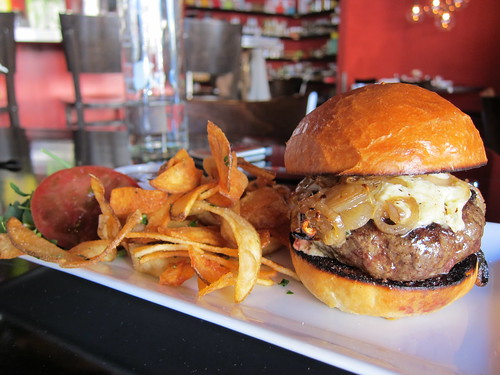 [/caption] I had been meaning to try outÂ Cube, on La Brea,Â for awhile now. I’ve consistently heard good things about the cafe doubling as a market and though it’s located next to The Tar Pit - which has been open only a few months yet I’ve managed to visit three times, already - I knew I was missing out on a good thing. A place that places itself under the organic,Â farmer’s market-to-table (Santa Monica, to be exact)Â and humane column, Cube - combined with Dine LA - gave me an opportunity to to prove myself right. Now I likely won’t make that mistake again by letting much time lapse before I go back. [caption id=“” align=“alignright” width=“240” caption=“Maple-Braised Bacon, Celery Root Puree, Cipollini Onions”] 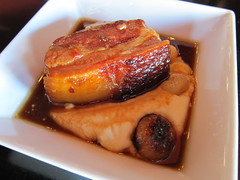 [/caption] Sam graciously met up on a last-minute proposal (“I just threw out my gross lunch,” his text read) for late lunching. We were lucky because by the time we had gotten there, we the grid had just regained electricity. Someone came out to take down their temporary signage indicating being closed for business until electricity was restored. Dine LA was on. Cube’s lunch is $22 ($$), which - no matter how you feel about prix fixe menus - is a good deal because the truffle burger is usually $15 and the maple-braised bacon, $10, all before dessert. Let me tell you - I can get behind almost any restaurant that serves bacon as an appetizer. My slice - which was on a bed of pureed celery root and adorned with cipollini onions - was so tender and delicious, I had barely realized it was a filet of bacon until I had devoured the dish and finally felt its weight in my stomach. [caption id=“” align=“alignleft” width=“240” caption=“Cube Garden Greens & House Ricotta Ravioli with Braised Oxtail Ragu Sauce”]

[/caption] I got the Cube Garden Greens and House Ricotta Ravioli with Braised Oxtail Ragu instead of the San Marzano Tomato Sauce, which proved to be very tasty in no small part by how fresh the pasta was. The braised oxtail gave good additional texture to the entree that had everything (psst - the greens are inside the ravioli and the ricotta is outside). Sam ordered the Cube Truffle Burger, which came in a shiny House Brioche bun with Caramelized Shallots. Perfectly-fried Crispy Potatoes accompanied the burger as well as a side of Chipotle Ketchup, which was good but probably could have used more spice since ketchup is inherently sweet. The burger itself, “trufflized” by way of oil and not truffles themselves (for a $15 price point? let’s be realistic), was very good and though seemed smaller at first glance by comparison, is actually a more-than-generous size. The patty was fresh and juicy with a perfect pink center. [caption id=“” align=“aligncenter” width=“500” caption=“Torched Meyer Lemon Meringue Cake”] 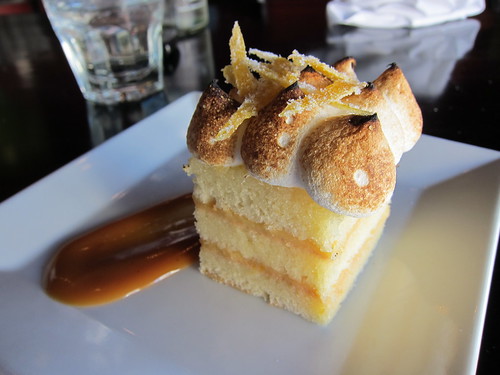 [/caption] Of course, next was dessert. Sadly, they were out of the Valrhona Chocolate & Butterscotch Pot de Creme Duo but we were content on the Meyer Lemon Meringue Cake and Blueberry Crepe with Rosemary Syrup and Rosemary Gelato. Heavenly!! I loved how fresh the lemon tasted in the cake (with candied peel as an added bonus) and well, I am partial to blueberries as well as rosemary - so this was a win-win situation all around. The blueberries tasted fresh in the rosemary syrup. You can do Cube during Dine LA, but it’s highly advised to do Cube, period… Not only is the food delicious and made with quality ingredients, it’s incredibly fun. 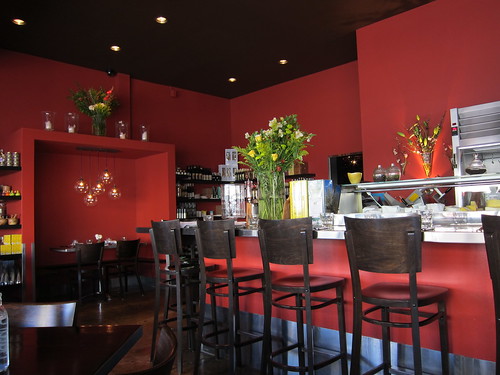